Perched high above the ocean, this island homestead forges strong links with the natural environment

Clifftop homes usually command good views – and this house is no exception. Built on a picturesque island in the Puget Sound area, the house overlooks a major waterway, frequented by migrating whales and large ships.

But maximizing the view was just part of the wish-list given to Robert Miller, who did the architectural design, and interior designer William Beson. The house also needed to blend in with the surroundings, with minimal disturbance to the land – not one tree was to be removed.

"The owners wanted the house to reflect a traditional craftsman influence, but they also favored the Northwest timber houses that are typical of the area," says Miller. "This is a very architectural look, with the structural elements exposed as part of the design."

Miller says this look was combined with a slight Asian influence, which is also common in the northwest.

"The clean lines of the roof ends and the siding, for example, reflect this influence. The chain downspouts are another Asian element – the running water imparts a very serene feeling." 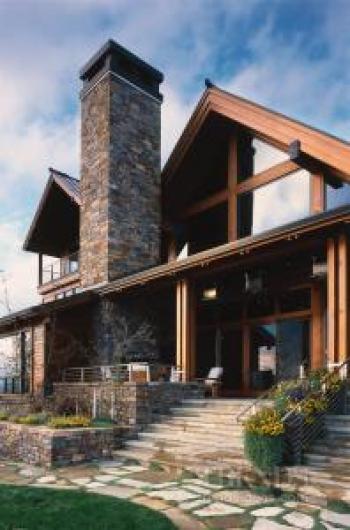 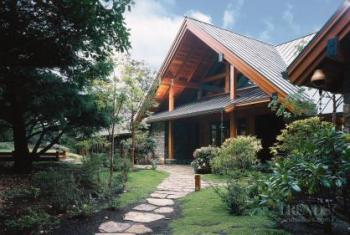 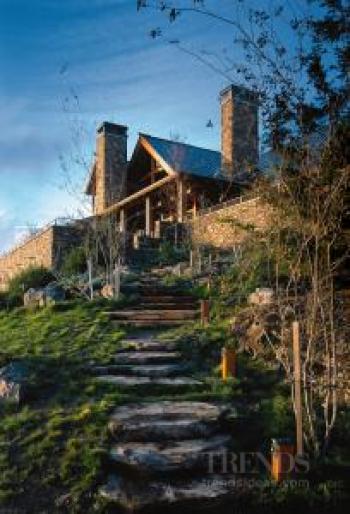 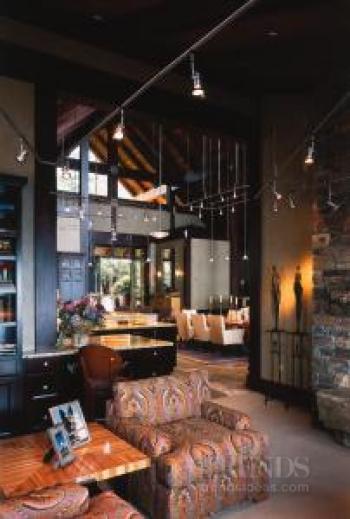 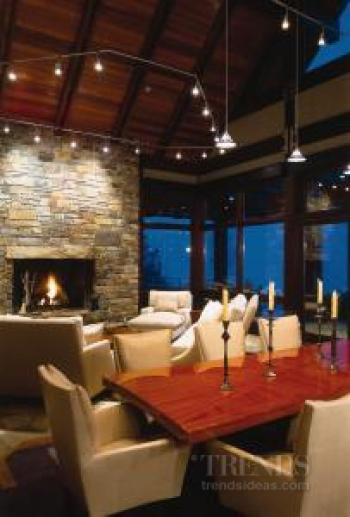 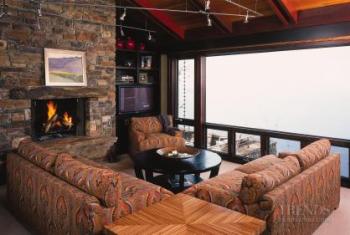 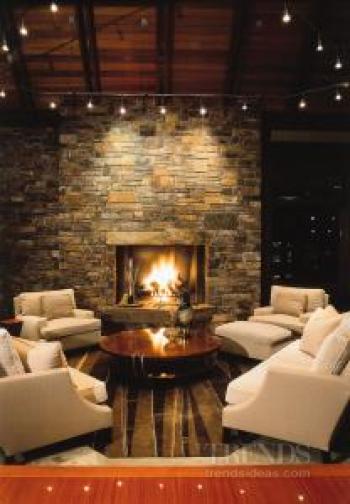 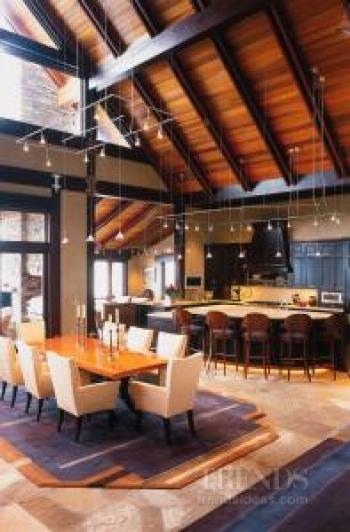 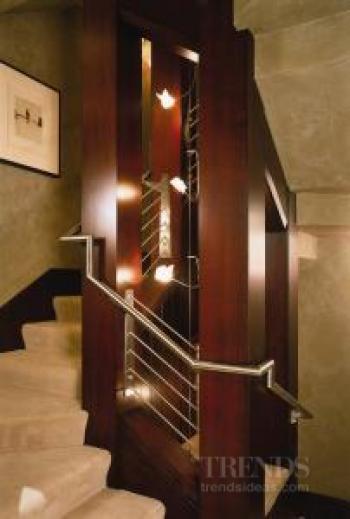 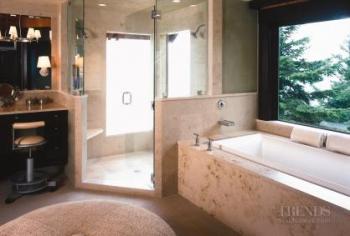 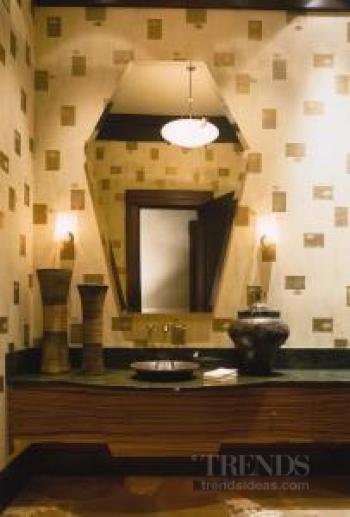 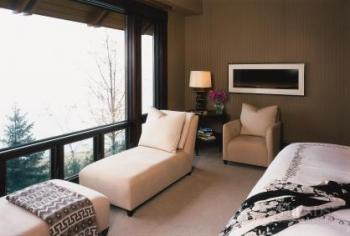 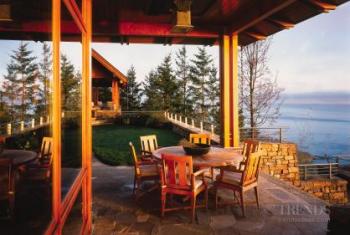 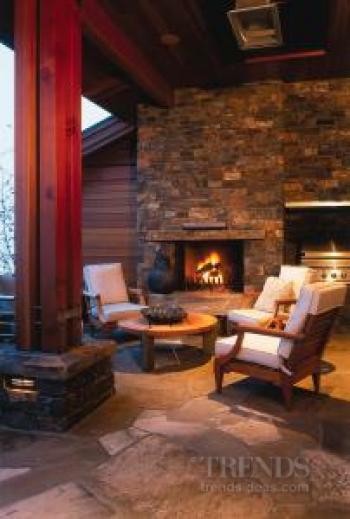 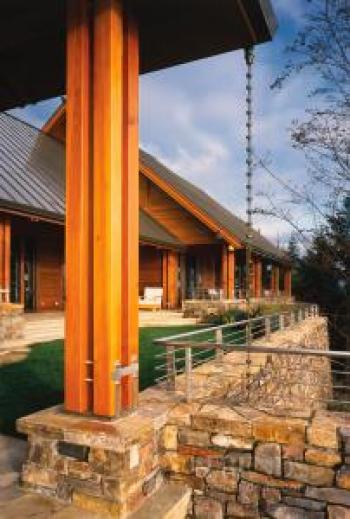 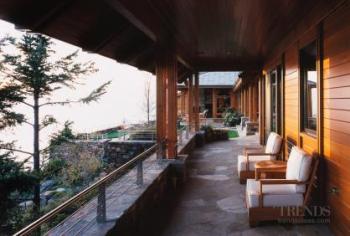 Many of the materials for the house, including the stone for the plinths, chimneys and paving were sourced locally.

"Using local materials was another way to ensure that the house would sit naturally within the wooded landscape," says Beson. "The house is not unlike the madrona trees in the area. These have a peeling bark that exposes a beautiful, smooth wood which stands out amid the evergreen forest. The color of the cedar on the house is very similar."

To maximize the dramatic ocean view, the house incorporates an eagle's nest – or whale watching tower. There is also an extensive outdoor living area, partly supported by a 14ft-high stone retaining wall, which Miller designed as an amphitheater. Paving on the terraces is an extension of the Mica stone flooring used inside the house. Pathways also feature the stone, which gradually opens up to become stepping stones across the grass.

"Merging the outdoors and indoors was an essential element of the overall design," says Beson. "We wanted the house to be of the earth – hence the use of natural materials both outside and inside."

In keeping with this desire, the front entrance is subdued and gives little indication as to what lies beyond.

"The entry feels like a small A-frame cabin, but once inside, the interior opens up to expose the dramatic scale of the house and the magnificence of the view beyond" says Beson.

"It was important to have that volume, particularly as the light fades quickly in the northwest in winter," says Miller.

To help contain the space visually, two different colored wood types were used for the ceiling – fir and cedar.

"These help to make the space more intimate," says Beson. "We have also introduced alder wood around the doors and windows. This has been stained a warm chocolate color, but you can still see the grain."

Large furniture pieces were chosen to fit the scale of the house, with an emphasis placed on both color and texture.

"The house itself is a combination of smooth and textured surfaces – the polished wood and the smooth stone floors versus the rough stone chimneys. This theme continues in the furnishings," says Beson. "The cream-toned sofas, for example, feature a bouclé exterior, but have mohair velvet seats."

To further contrast the textured elements, Beson introduced furniture made from rare and exotic woods.

"It's a question of balance. These highly polished surfaces provide a shot of clarity amid all the textures."

Rugs in the house were all custom designed and manufactured, with colors inspired by the local stone. Made from wool and silk, these also provide a mix of textures. Some wall coverings, such as those in the main bedroom, are also textured.

Beson says quality and simplicity were the key in determining the decor.

"We wanted to reinforce the zen feeling, and in this situation, less really is more. It was also important to let the view speak for itself, without interference from an overly bright or cluttered interior."