The first underground railway station to be built in New Zealand, the Britomart project produced a number of challenges for civil engineers Opus International Consultants. The company provided structural and civil engineering services, and was also responsible for the mechanical and electrical engineering design.

Project director Melvyn Maylin says the excavation of the station site was particularly challenging due to the soft nature of the reclaimed land, its proximity to the sea, the high water table and the possible impact of the earthworks on surrounding heritage buildings.

"The Resource Management Act also put a limit on the amount of water that could be drawn down. It also limited the maximum lateral movement of the finished building to just 13mm on one side and 25mm on the other," Maylin says.

"This is an extremely narrow margin but was necessary to prevent any settling of the land, which would have caused problems to the existing heritage buildings."

In addition, Maylin says that because the station is so close to the sea and the bottom of the station box is 9m below sea level, the structure is under significant uplift pressure. 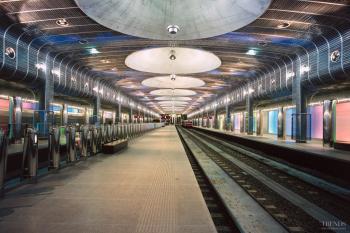 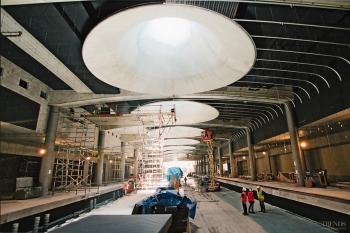 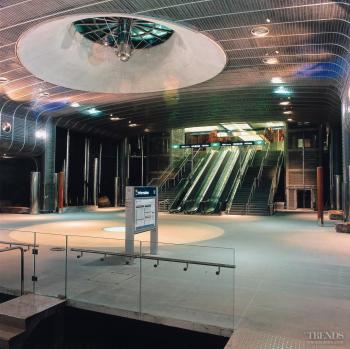 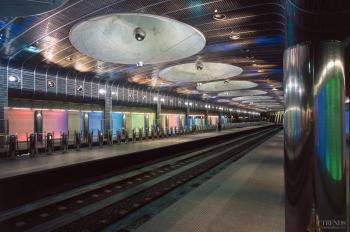 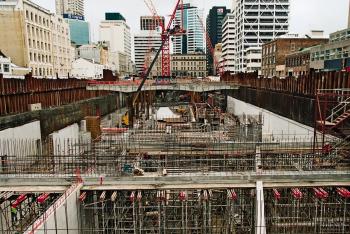 "Without some form of counter pressure, the concrete box that houses the station would effectively pop back out of the ground."

Tension piles bored through the soft ground into rock below are fixed to the slab to prevent this occurring. Opus also specified the top down method of construction, which used secant piles. These hollow, unreinforced piles were drilled into the water-permeable ground, ensuring the surrounding land remained stable. Overlapping reinforced piles were then bored into the secant piles.

Other work carried out by Opus – of a more visible nature – included finding an engineering solution for the large, concrete volcanic cone skylights.

"We needed to take the architects' concept drawings and make these a reality," says Maylin. "In this instance, the cones were cast in Shotcrete in a mould and then lifted into place and fixed to a steel frame within the roof structure."

Opus also designed the building services, including the ventilation system. As Britomart is the only underground station in the world to accommodate diesel trains, this was particularly challenging, says Opus' principal building services engineer Paul Burkinshaw.

"With more than 10,500 people per hour expected to be using the station at peak times, the air supply and extraction system needed to expel the fumes both quickly and efficiently."

Working in conjunction with Arup Australia, Opus designed a system that utilises 49 fans in the station and tunnel.

"It is essentially a push-pull system with a mix of unidirectional and reversible fans, both centrifugal and jet," says Burkinshaw. "The reversible axial fans have a rating of 250kW and are capable of moving 90m3 of air per second. Exhausted fumes will principally be diluted and expelled through two 30m-high towers."

Opus' lead fire engineer Roger Feasey says the variable-speed fans will also play an important role in the event of an emergency such as a fire, as automatic responses are built into the control systems. In addition, automatic fibreoptic heat detectors in 32 zones will deluge the area with foam when temperatures reach a preset level, he says.