Even today, much of South Australia's riches still lie buried deep in the ground, in the form of untapped mineral deposits and energy resources. Leads for potential new seams are discovered in part by geologists' scrutiny of massive core drill samples gathered from across the state. Previously these cross-sections of layers of earth and mineral deposits were held at four over-stretched facilities.

Now, the new South Australia Drill Core Reference Library consolidates all these core samples into one expansive facility, making it a go-to destination for geologists and scientists. The staggering 7.5 million metres worth of drill core samples date from 130 years ago to the present. However, much as forensic advances throw fresh light on old DNA cases, so too do new geotechnical technologies reinterpret old cores for fresh tell-tale information.

The new Core Library is situated at the Innovation Centre at Tonsley – close to relevant infrastructure and the airport. Having worked on the business case for the placement of the library at that location, architecture firm Thomson Rossi became the logical choice to design the building.

Simon Thomson, director at Thomson Rossi, says that as a flagship geological resource, the facility had to have strong visual impact.

"To achieve the stand-out architectural look required, we designed the cladding to reflect the very essence of a drill core sample. At the public end of the building the large cantilevered forms and facade are in perforated and non-perforated weathering steel. As you look down the side of the building the metal gives way to precast concrete panels, some with flecks of steel in them – much as you get early indicators of a mineral seam before actually bursting through to the mother lode." 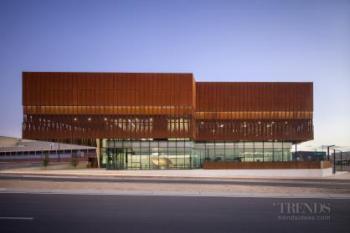 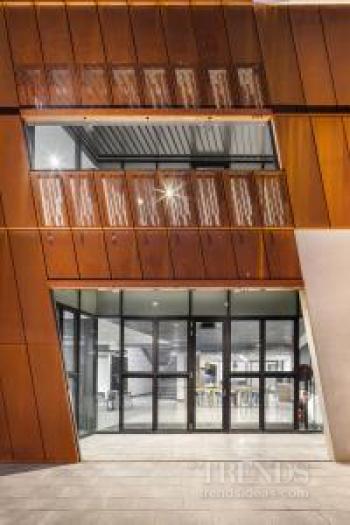 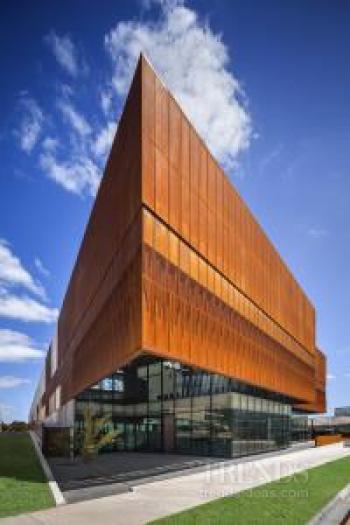 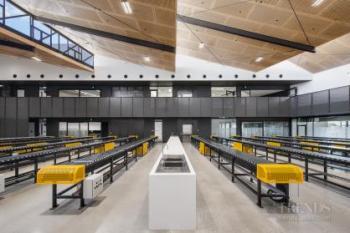 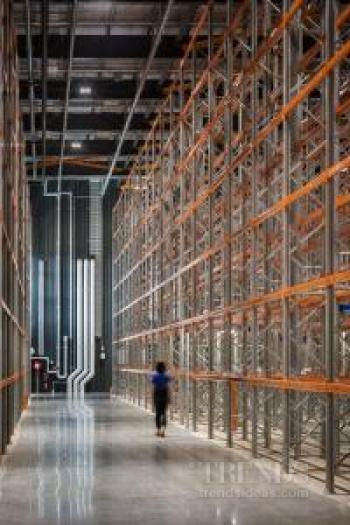 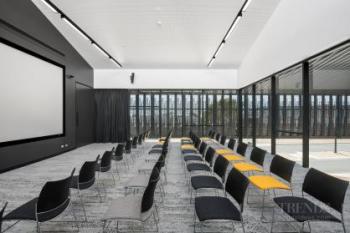 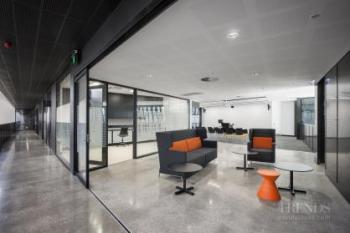 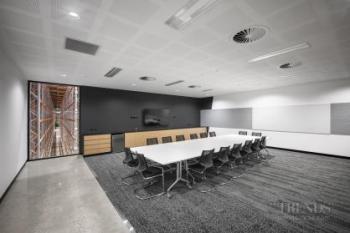 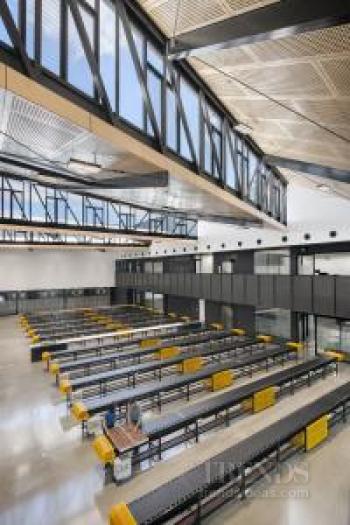 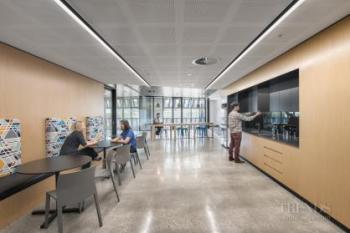 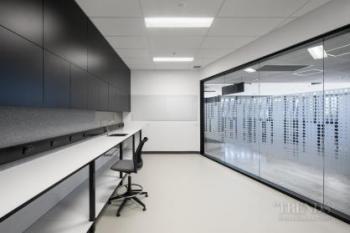 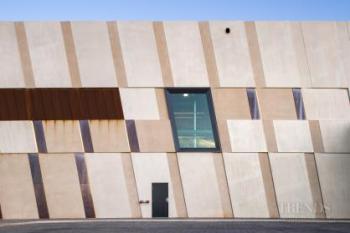 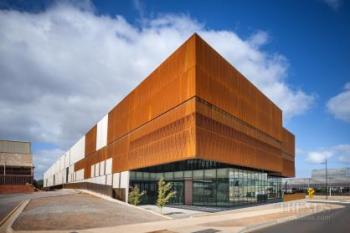 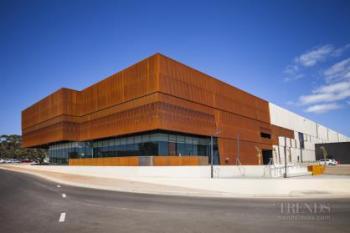 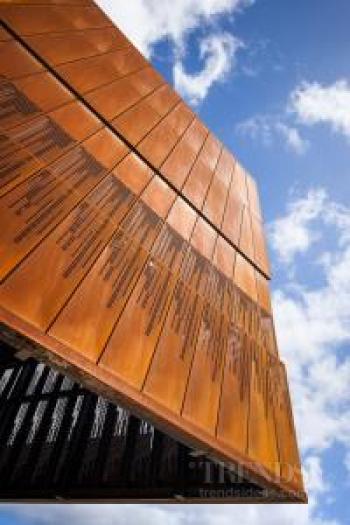 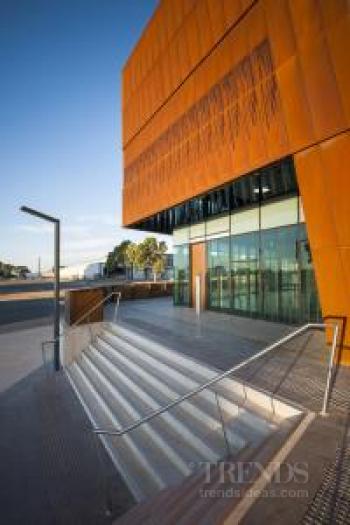 In other words, the entire, long building is an embodiment of a giant core sample.

"The weathered steel facade echoes the core drilling industry in another way too. As the name suggests, the steel weathers and changes, oxidising to a rich red rust colour. In some areas, this metal is allowed to leach into the complementary concrete panel cladding – reminiscent of how minerals leach into rock underground."

Seen from the public entry side, the building's ground floor is clad in glass, with two levels of the oxidised weathering steel rising above that.

"The ground and first floor are taken up by two levels of administration, exhibition and conference rooms looking onto the generous, double-height public viewing room," says Thomson. "The upper floor is half plant and half hidden sawtooth roof, the latter hidden away behind the metal cladding.

Inside, eight extended corridors of core sample racks reach up to the ceiling, taking up four fifths of the building. However, the feel at the core library is very far from a warehouse storage facility.

"Much like with grand libraries of ancient times, we wanted the process of arriving at the formal entrance and then moving forward into the double-height core viewing room to be almost a ceremonial experience in itself," says Thomson.

A requirement for the viewing room, or Discovery Room as it's called, was plenty of natural light – which is where the sawtooth roof comes in.

Traditionally, sawtooth roofs were a way of bringing indirect natural light into a large building and the same applied here. We set each ‘tooth' at a slightly different angle, a departure from the more traditional version. This creates a very pleasing ceiling symmetry on the inside – as well providing optimum natural light to work under."

The high-volumed Discovery Room acts as a thermal chimney, too. With windows in the sawtooth roof open, heat draws up and out of the facility. In addition, the core samples themselves act as a heat sink, soaking up then releasing heat as required to keep the building cool or warm.

Furthering the idea of a ceremonial experience, a first-floor walkway looks down on the viewing tables.

"The facility is now being used extensively for education purposes and this high walkway was an easy way to let students see what was happening without the potential of touching and compromising the core samples – a rearranged rock or two might tell completely the wrong geological story."

David Groom, operations manager at the core library says the site is also becoming very popular for workshops as well as for seminars and business incentive programmes for various government, business and industry sectors.​

"We are constantly receiving positive feedback from clients as to how the building can be used to suit the business of the day," Groom says. "Its design offers a flexible platform that adapts to cater for these events in conjunction with our principal business of promoting our state's economic potential with our drill core reference material."