Looks can be deceiving – behind this traditional villa facade lies a bold, contemporary interior with walls of glass and stairs of bronze

First a home, then an office, and now a home again. Like any 19th-century Georgian villa, this house has gone through several transformations in the past 100 years, but none more dramatic than the changes over the past four years.

The house, which is located in a sought-after area near the inner city, was remodelled four years ago by Fearon Hay Architects to provide commercial office space. But with a change of owners, the house needed to revert back to a family home.

Interior designer Leonie von Sturmer of Von Sturmer Design says the new renovations had to accommodate the dramatic changes made when the house was converted to open-plan offices with glazed interior walls.

"The new owners appreciated the scale and proportions of the double-height interior, which literally opens up in front of you as you walk through the front door," von Sturmer says. "But they also wanted a more comfortable Raffles-style family home."

The designer says the lower level of the house, which opens to a terrace at the rear, was an obvious choice for the living space. The semi-cantilevered upper floor, which is at street level, therefore needed to accommodate bedrooms and an office. But this also posed a challenge. 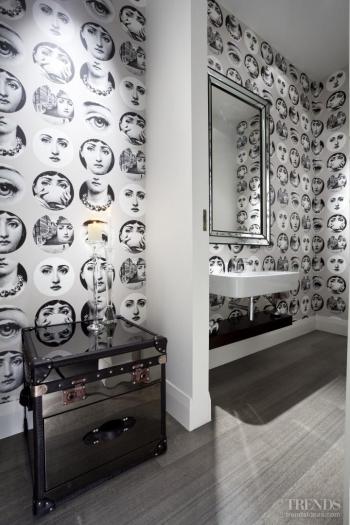 "Privacy was an issue, for several reasons. The guest suite had to go at the front of the house, which has windows all round; and the entire length of the master suite was glazed with 3.5m-high walls."

Von Sturmer says wall partitions and window shutters were introduced to provide privacy – the shutters also help create the clean-lined, semi-tropical look the owners were after.

"The doors and windows were extensively altered in the earlier renovation, to create arched openings. Stone reveals were also introduced at this stage, and the entire house was reclad with stone, so the house already had a much more substantial look."

This sense of substance continues inside the house, thanks to the large steel beams and sculptural bronze metal spiral staircase added during the office fit-out.

"These elements already provided the wow factor, but it was important to capitalise on this," says von Sturmer. "The staircase was the real inspiration – it set the scene for the rest of the interior design."

To maximise the visual impact, the designer added a 3.5m-high bronze-framed mirror to the central chimney, which is a focus of the entry.

The kitchen, on the left of the living area, was designed for entertaining on a grand scale. White and metallic lacquered cabinetry is paired with a long Carrara island benchtop. An additional food preparation and clean-up area is concealed behind sliding doors. This pantry space has its own window so there is plenty of natural light.

The existing painted timber flooring was stripped back and bleached for a softer look.