The rarefied atmosphere of this Maastricht church has undergone a thoughtful conversion, with full respect given to the existing architecture

There's a long relationship between Christianity and the printed word. When Gutenberg developed his movable-type press, back around 1439, one of his first productions was the Gutenberg Bible. And while Luther attached his 95 Theses to the door of the Castle Church in Wittenburg, it is the efficiency of the printing press that is credited for the speed with which his message was copied and distributed – a key factor in the Reformation.

In the current age the relationship between the Church and the written word has become, in some instances, less puritanical and more commercial. This Maastricht church is a case in point. A home to the Dominican order from about 1360 to 1794, the church today features a new bookstore called Selexyz Dominicanen, with interior architecture carried out by Dutch architecture firm Merkx+Girod.

For anyone thinking this modification of its original intended use is akin to sacrilege, it is worth considering the building's chequered past. Following the French Revolution, when Maastricht became part of France, a number of religious properties, including this church, were confiscated. The Dominican friars left the city, never to return, and from that point onwards the building has fulfilled a number of non-religious roles.

"It has been a boxing venue, a bike stand and even a flower exhibition space," says architect Evelyne Merkx, whose firm has now undertaken three projects for client Boekhandels Groep Nederland (BGN).

"The architecture of each store has varied by city, sometimes modern, sometimes classical, but always at an important location, in a strong building, playing a strong role in the city's social and economic fabric." 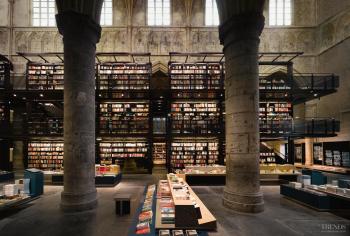 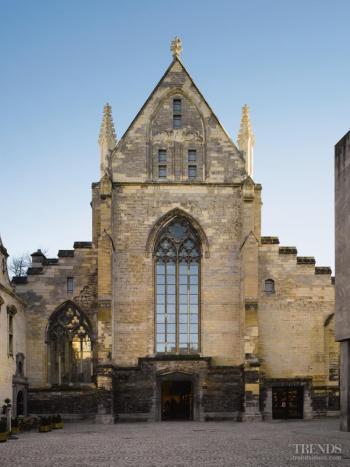 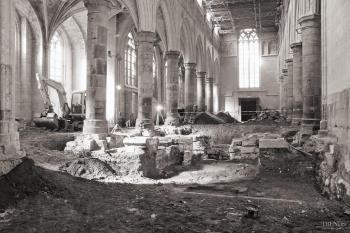 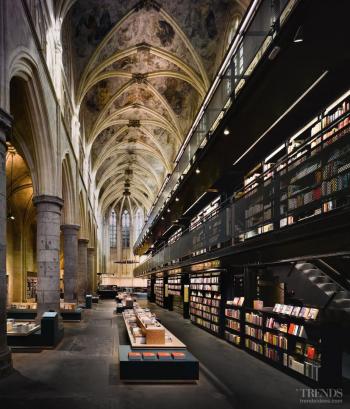 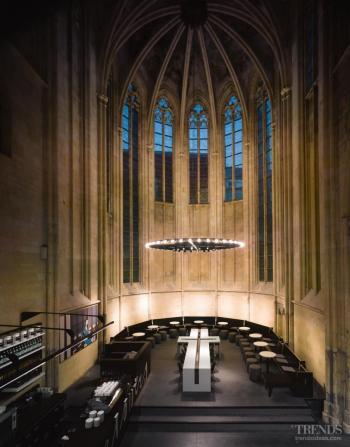 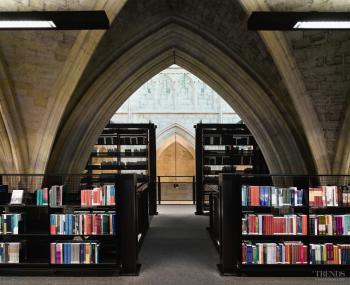 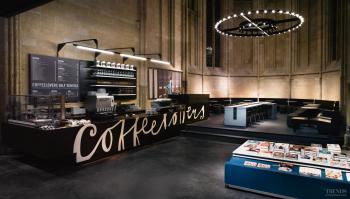 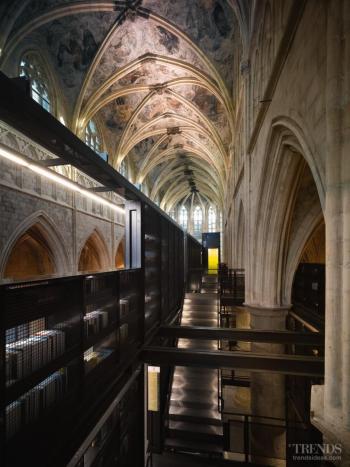 At Maastricht, the client requested a commercial area of 1200m2, with the initial idea of installing an entire second floor in the structure. However, the architects were dismayed with this approach, as the harm to the existing architectural qualities of the space would be considerable. The Merkx+Girod alternative involved an asymmetrical layout and a new device dubbed the ‘bookflat'.

"The bookflat is a vertical structure, positioned off-centre, that provides space for the additional area required by the client," says Merkx.

"This gesture allowed the church to remain relatively empty on one side and filled on the other; low on one side and high on the other. The low area provides easy orientation and visibility. While going up is traditionally not done in retail, in this case it works. Customers are attracted to the upper levels to experience the church architecture and ceiling paintings up close. In this way, they also spend more time shopping, see more books and have a more interesting experience."

The design of the bookflat is described as the most intricate aspect of the project, due to the dimensions, construction, weight, precision, detailing and complex accumulation of functions, such as bookcase, stairs, elevator and work desks.

"The bookflat never actually touches the existing architecture – it stands apart from the columns and walls. The bookflat is independent, and so is the church, but they engage in a visual dialogue," says the architect.

"The way the bookflat is situated in the church – asymmetrical and vertical in scale – allows the church to remain high and empty. The new interior features were designed to celebrate the architectural qualities of the church and make them readable for its visitors. We think it pays homage to the original architecture without being historical in size, shape, form, material, colour or gesture."

Made entirely of black-painted steel, the bookflat makes a strong impact in the beige-coloured stone environment.

"The use of perforated sheet metal means the bookflat remains light and transparent, with many openings and perforations providing vistas at unexpected places. All other book displays, shelving systems, cash registers and information points are not made from any black or grey material."

Instead, these elements are manufactured from wooden materials, in a range of colours and textures. Lighting also plays a crucial role. Traditional stained-glass and clerestory windows bring in natural light, which combines with artificial light to create a pleasant interior environment. Precise lighting fixtures in various parts of the church aid functionality, particularly those in the large bookcase. The large circular lighting fixture above the cross-shaped reading table was specially designed by the architect. Suspended from the ceiling, and also incorporating a cross motif, it creates a more intimate atmosphere.