With two coal-black facades and a central glass atrium, sparkling like polished gems, the China Diamond Exchange Center makes its mark on the skyline

Even in a substantial Grade A office tower, the potential reallocation of spaces can be a major design consideration. Together with clean, contemporary architecture, generous floor plates, and ergonomic pedestrian flows, there should be the option to repurpose the spaces as business needs evolve.

The 15-storey, nearly 50,000m2 building provides space for the China Diamond Exchange, which currently occupies one side of the building, as well as other related tenancies. In addition to office space on the upper levels, the building includes ground-floor retail facilities, with the elevator lobby, exhibition space and a restaurant on the floor above.

Partner at Goettsch, James Zheng says the building was conceived as two large rectangular structures connected by a central glass atrium, which looks like a giant sparkling diamond sandwiched between great slabs of coal.

"The core business of the major tenants inspired the design in other ways, too," says Zheng. "Diamond-shaped elements can be seen in the atrium's glass skylight, the structural geometry of the entry canopy, and the lobby floor." 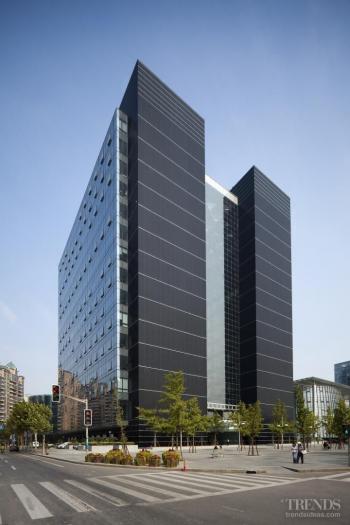 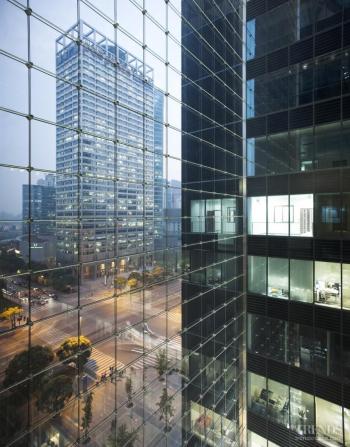 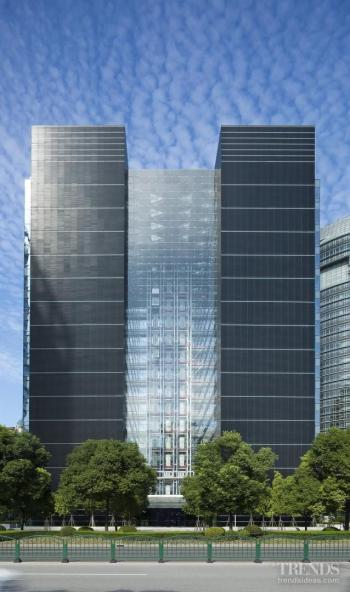 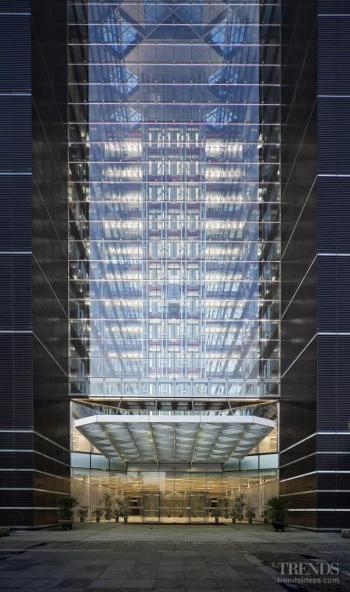 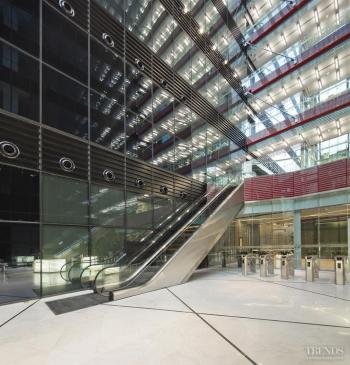 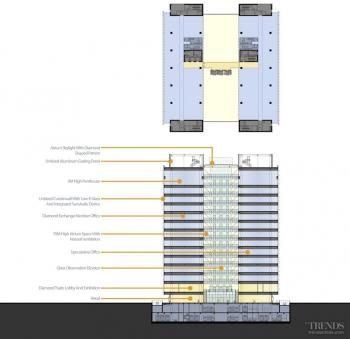 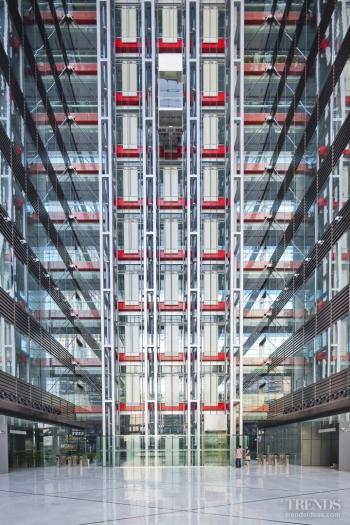 Essentially, the architecture of the China Diamond Exchange Center is a tribute to its stock in trade – an aesthetic that also helps it stand out from other, in many cases taller, structures nearby.

A colour palette of black, grey and red dominates the building. The two office blocks are fronted in black, which provides hard-to-read surfaces that disguise the intakes and exhausts of the mechanical systems. All building systems were pushed to the outer areas of the building in the pursuit of large, uncluttered floorplates that are both attractive to tenants and practical in terms of reconfiguring offices as required.

Exposed metal elevator cabs, stainless steel cables and other, more reflective surfaces lend a subtle contrast in grey. In addition, there are several splashes of red within the decor. With many positive connotations in Chinese culture, this colour brings a sense of warmth to the minimalist spaces.

"The translucent glass atrium and open elevator towers are the central focus of the building," says Zheng. "Besides evoking the strength and sparkle of diamonds, the atrium creates a sense of business transparency. At the front and rear of the building, 20m x 70m net walls supported by cables admit maximum light into the cavernous central space."

The three elevators, in the middle of the atrium, climb to sky bridges on all levels that lead to both towers. The activity of the elevators is not only visible from the lobby but also from outside, through the gleaming net wall. Similarly, activity on the street can be seen from within the atrium, further animating the ground-level spaces.

The architect and developer had far-sighted plans for this tower and the elevator banks are a clue to the ongoing viability of the building.

"With diamonds being such a valuable commodity, staff working in that tower enter through a screening room and then travel up to their floor on separate, secure elevators away from the public eye," says Zheng. "So, while the central elevators appear to service both sides, in reality they currently only take people up to the multi-use tower."

It is envisaged that in the future, the China Diamond Exchange will occupy both sides of the building, and at that time all levels and both towers will be accessed, via security, by the central elevators.

"We could have built separate elevator shafts for both towers, but the long-term view dictated that we build the central, feature elevators that could eventually be utilised by all," Zheng says.

Topping the towers – and adding to their adaptive use – are upscale penthouse spaces that are likely to evolve into executive offices or exhibition areas.

"Everything about the China Diamond Exchange Center was designed with an eye on the future."