Apartment stereotypes had no place in the design of this condominium interior, where a series of large wooden boxes define the open-plan living areas

The design of an apartment interior in a new city high-rise invariably starts with a raw shell and ends with a collection of rooms that bear little resemblance to the original space.

But there are other design alternatives, as this project illustrates. The owners of the new apartment wanted to step away from the predictable approach, says architect Eric Cobb.

"The clients put together a very detailed, yet open-ended program for the project," he says. "The basic functional elements needed to be accommodated, but they also wanted an interior with design attitude and an understated sophistication."

Cobb used the raw shell as his starting and finishing point, choosing to highlight its form and size by ensuring no internal room dividers or walls touch the perimeter walls. The result is a very open space that maximizes the view at every turn.

"Pulling everything away from the curtain wall opens up a view through the unit along the diagonal, which makes the space feel immense. Navigating the perimeter allows you to experience the spaces in a way that would not be possible if there were interior walls. Even the entry is positioned to provide a direct sight line to the urban view." 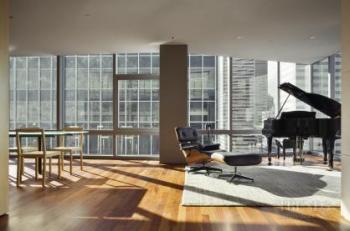 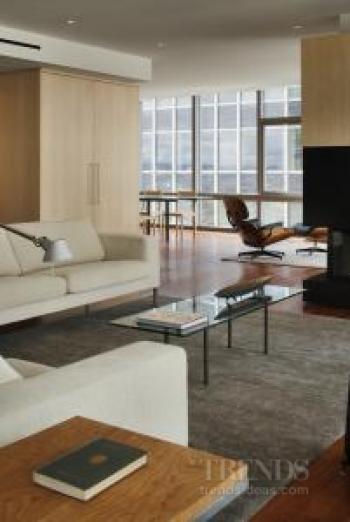 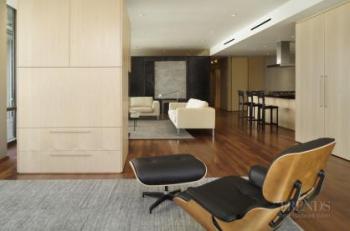 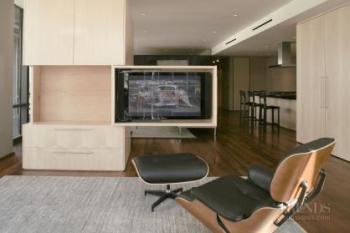 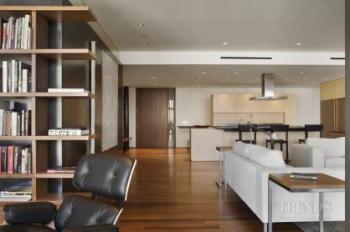 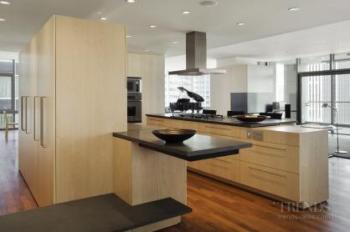 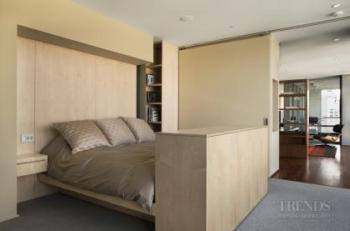 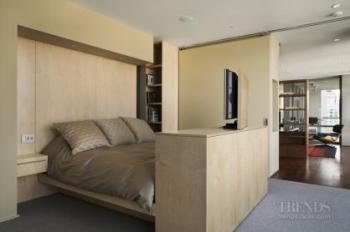 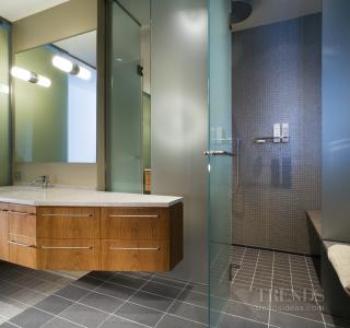 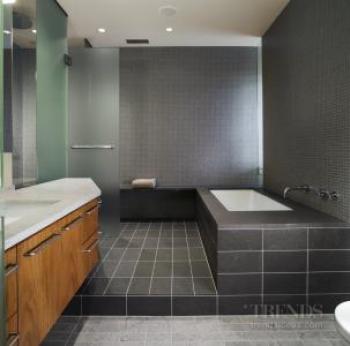 Cobb says the shell was left as simple and clean as possible, and objects placed in it. The kitchen, for example, was conceived as a series of large, sculptural, wooden volumes, which appear to float independently within the overall space. A similar large mass accommodates the fireplace and audiovisual equipment, while the guest bedroom is contained within a distinctive, steel-clad box.

The materials reinforce the sleek, architectural look, and help define the distinction between the shell and the introduced forms. All the cabinetry is light maple, which provides a strong contrast to the rich Brazilian cherry flooring.

"There is a sense of looseness between the counters and the wooden boxes that form the cabinetry. We deliberately didn't align these, as we wanted to retain the sense of two distinct, sculptural elements. The counters appear to slide off the side of the boxes, creating space for bar stools."

Most of the condominium's storage is provided by these cabinets. A bar is concealed within the largest unit. This cabinetry also separates the dining table from the kitchen, bringing a degree of formality to an otherwise casual, relaxed living area.

The master suite reinforces the openness that characterizes the apartment.

"We didn't want the bedroom defined by a wall that cuts it off from the rest of the apartment," says Cobb. "Consequently, the room features a large, rolling door that can be left open."

The spacious look continues in the his-and-hers master bathrooms, which share a large shower. Cantilevered vanity cabinetry enhances the spaciousness, while glass mosaic tiles add a critical luminosity. A tall, thin slot in the shower wall allows some borrowed light from the master bedroom to cast a dramatic illumination on the glass tile.