Promising to outdo existing apartments in an affluent neighbourhood attracts discerning and sometimes sceptical buyers. Producing the goods, therefore, is a must

It is a bold move to set the price tag of a new apartment three times higher than its high-end neighbours. It is also bold to promise potential buyers – who have taste and experience – that each unit will be customised to penthouse standards with the highest specifications. Bolder still is the architect who takes on the challenge – on a site with no shortage of council restrictions.

When Seymour Group Properties won the tender for a narrow riverfront site located in one of Brisbane's new residential riverside neighbourhoods, they had to push the envelope. New Farm has in recent years seen a flurry of development – apartments, renovated heritage apartments and retail precincts – aimed at attracting wealthy, trend-savvy professionals.

Arkhefield design director Andrew Gutteridge said to better target this audience, the original proposal for a multi-use development was scrapped.

"You cannot create top-end apartments above retail, because shops and pedestrian traffic undermine the exclusivity and security of the building."

The site also came with various council limitations, including height restrictions and the retention of public access and public views to the river. When Arkhefield met two of these criteria, council reconsidered the 5-storey height restriction. 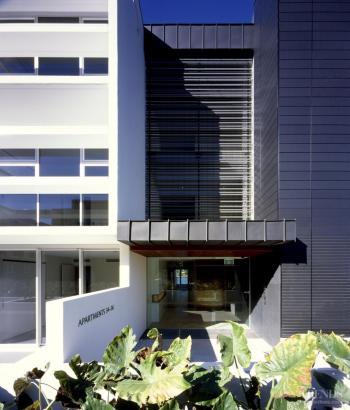 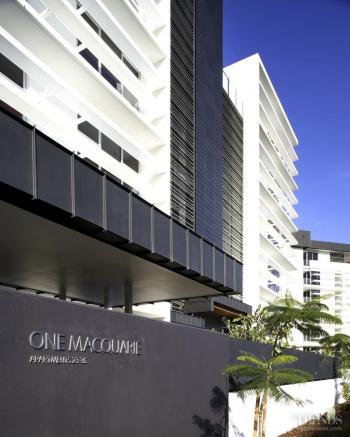 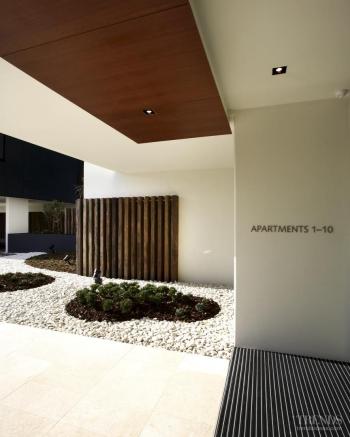 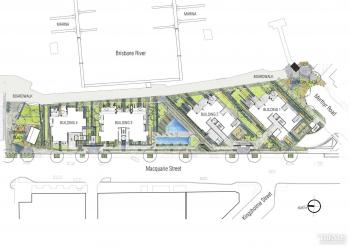 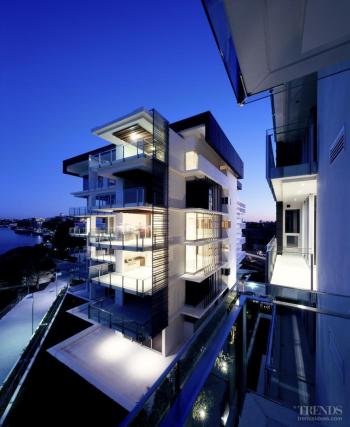 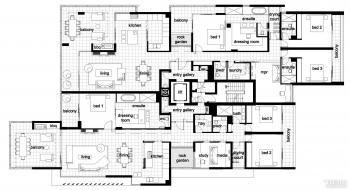 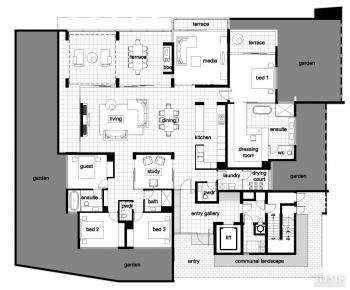 Now, at one end of the site, two adjacent buildings sit diagonally toward the north-east and the river, with city views from the rear. One is seven storeys high and the other is six. Both contain two apartments per floor.

"Beyond anything else, water and city views make these apartments more sought after," says Gutteridge.

At the centre of the property is the entrance and public amenities area. Next to this are two riverfront buildings, six- and three-stories high; the latter with just one apartment per floor.

Gutteridge says the fourth building had to be smaller because it is near the heritage Woolstore renovations.

"Council required us not to obscure sightlines to the Woolstore sheds or from the sheds to the river. In fact, the entire development could not mask views to the river, so the buildings were spaced at suitable intervals. To retain public access, the design incorporates a pocket park, boardwalk and marina," he says.

While the buildings are different sizes and shapes, the architectural language is the same, featuring black ribbons of timber and cantilevered balconies.

The extended glass balustrade of each balcony forms a contrast with the recessed windows, which appear dark. This design also provides a larger balcony space and more privacy for owners.

Gutteridge says bold vertical elements and a strong black-and-white colour scheme work together to give the building a taller appearance and more elegant form.

The large open-plan units have cross ventilation and natural light from three sides. Marble flooring was specified, as the cooling properties of the material are ideal for Brisbane's climate.

Natural stone finishes such as marble are often avoided in commercial residential use due to the cost and high error rate in laying the tiles, but Arkhefield interior designer, Angela Layton, says this is just one example of the developer's high standards.

"In addition, clients were able to customise their apartments, drawing from a number of high-end suppliers and products," she says.