When limited floor space dictates the size of a kitchen, at least two design factors come into play – ensuring there is enough room to move and introducing a look that is understated but not aesthetically cramped.

A mezzanine ceiling outlined the scale of this kitchen designed by owner Dave Strudwick in conjunction with architect Barry Condon of Sarah Scott Architects. Created from recycled kauri floorboards, the ceiling also forms the floor of the office above.

Strudwich says the first step was to consider the necessary circulation space – the kitchen can be entered two ways – and position the cabinets, island and appliances accordingly.

"Including high upper cabinets to the rear provides maximum storage, while high-spec Blum fittings allow the cabinetry doors to concertina up, without moving beyond reach."

The kitchen is open to the living area and forms a central feature of the open-plan space. 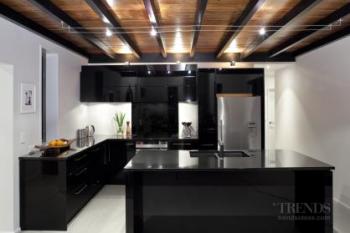 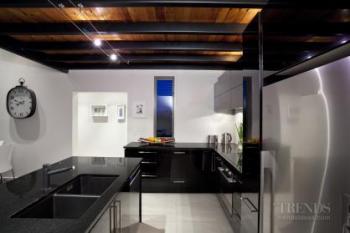 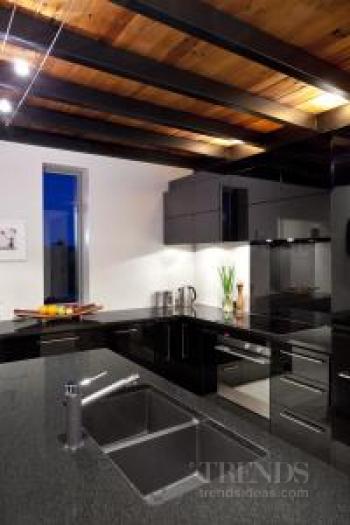 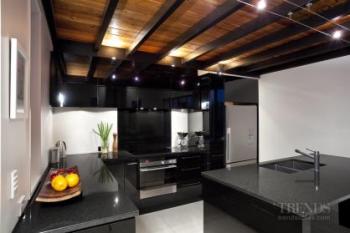 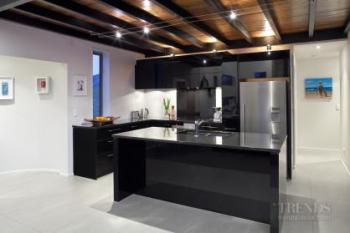 To achieve a New York loft-style aesthetic, almost everything is black. All cabinets are finished in black thermoformed vinyl wrap to achieve the level of gloss required, says the architect.

"The sink is black engineered stone and the benchtops are in a similar material. A black hob and black glass splashback also feature. The dark wood cross beams provide a connection between the kauri ceiling and the kitchen.

Strudwick says that while the sleek kitchen has a strong presence, it also recedes visually, making it hard to read the exact depth and the nature of the forms that comprise the space.

"There is a balancing element in the living area – a jet-black, raised fireplace," he says.

The initial plan was for the kitchen's back wall to be in the same tone, but a late female intervention placed contrasting white surfaces there, pulling the design back from what the owner describes as a masculine aesthetic.