Although first mooted more than 70 years ago, Norman Foster's Hearst Tower is a soaring tribute to 21st-century innovation, with architecture that fully embraces environmental design principles

Back in the 1920s when publishing magnate William Randolph Hearst commissioned a six-storey Art Deco block to house his empire, he anticipated that the building would eventually form the base for a landmark tower on New York's Eighth Avenue. But he could never have predicted the soaring glass structure that has set a new benchmark for environmental design.

For architect Norman Foster, whose London-based practice won the contract to design the tower, responding to Hearst's original vision in the New York of today provided a multi-dimensional challenge.

"The key question was how to relate the new to the old both materially and conceptually," he says. "Although the historic Art Deco building was always meant to be the base for a tower, this project demanded both the sensitivity to seamlessly fuse the contemporary with the historic, and the creative assurance to allow each element to express its own age with integrity. At the same time, we needed to design a truly 21st-century building for a progressive company that places a high value on the concept of a healthy workplace."

Foster says it was intended that the 46-storey headquarters for the Hearst Corporation would not only be an iconic building, but would also pioneer environmental sustainability in an office high rise.

From design through construction, furnishing and occupancy, the Hearst Corporation was committed to producing the most environmentally friendly office tower in New York City history. And it's a pledge that has paid off – the building is expected to be the first office building in the city to earn a Gold Rating under the Leadership in Energy and Environmental Design (LEED) guidelines, established by the US Green Building Council. 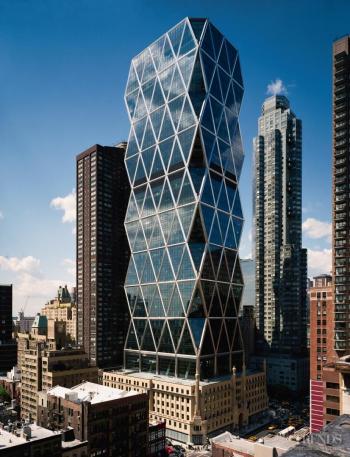 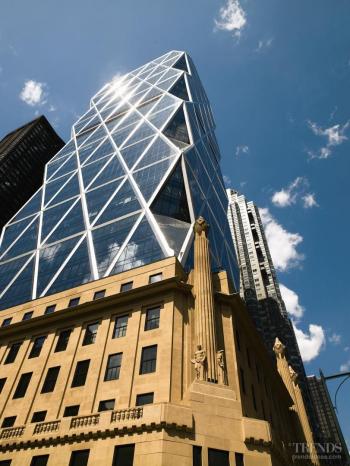 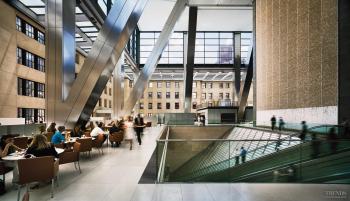 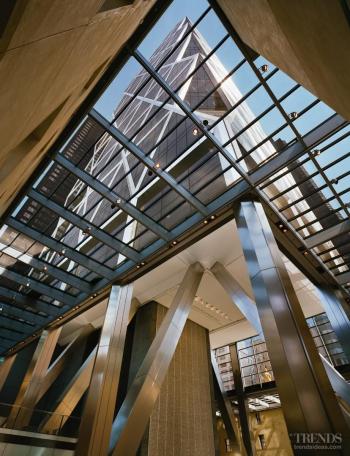 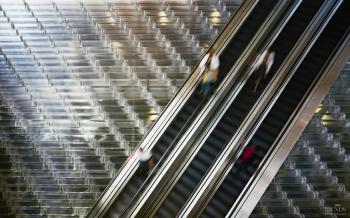 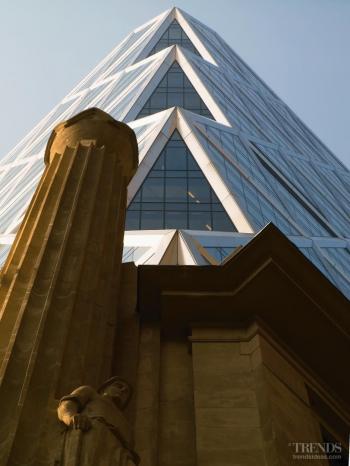 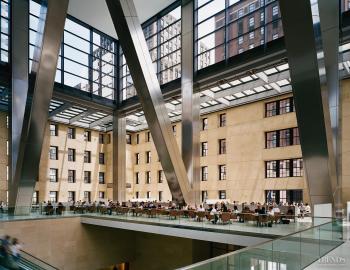 Foster says one of the most significant environmental features results from the structural design.

"We used a diagrid structure that is, by virtue of its triangulated geometry, inherently strong and light," he says.

The diagrid system (a verbal contraction of diagonal grid) creates a series of four-storey triangles on the facade. The system eliminates the need for horizontal steel beams, which is a first for North American office tower construction.

"It uses 20% less steel (approximately 2000 tonnes) than a conventionally framed structure and is highly efficient," says Foster. "In addition, as the tower's core is off-centre, it was the best means to create a flexible, column-free interior space."

Foster says the diagrid structure is also a key architectural feature of the building.

"By expressing the structure in a sculptural way and casing it in reflective stainless steel, it becomes the identity of the tower – especially from a distance. At different times of the day, the changing light strikes the building and makes it sparkle."

The tower was effectively lifted 10 floors to achieve a separation from the original building. This makes the tower appear to float above the solid base – an effect enhanced by a transparent skirt of glazing that floods the spaces below with natural light.

The building's faceted corners are another distinctive feature, designed to maximise natural light and increase the potential for views out across the city. Foster also provided an extensive public area by incorporating the upper four stories of the existing building into a grand atrium.

"The concept was to create an urban living room – a piazza that would connect with the city and form a link between the interior and exterior spaces," he says. "By reflecting, in tone and colour, the cast stone of the old facade, it creates an impression of a bustling town square, rather than a conventional office lobby."

The atrium incorporates a cafeteria and auditorium, as well as a number of mezzanine levels that can be used for functions. It also features an 8m x 22m sculptural water feature, designed by glass technologist James Carpenter, whose work with light and glass can also be seen at another recently completed landmark New York address, Skidmore, Owings & Merrill's 7 World Trade Center.

Icefall, as it is titled, is made from hundreds of glass prisms cast from Tasmanian sand, which has a low iron content and makes the glass resemble white ice. The cascading water, and the movement of people up and down the escalators that traverse the waterfall, help to animate the space.

In keeping with the sustainable design parameters, rainwater collected from the roof of the building is recycled for use in the sculpture. Rainwater is also used to replace water lost to evaporation in the office air-conditioning system, and is used to irrigate plants and trees both inside and outside the building. It is anticipated that rainwater will account for half of the water used.

Recycling applies to other materials as well – more than 85% of the steel in the building is recycled. Further environmental savings were made by using concrete cast stone on the facade rather than traditional limestone panels, while other green initiatives include the use of low-emission glass on the curtain wall. This blocks the invisible solar radiation that causes heat gain.

In conjunction with the glass, Hearst has installed light sensors that control the amount of artificial light available at any given time. To maximise energy efficiency, lights and computers turn off automatically when a room becomes vacant.

Foster says the triangulated structure has the advantage of allowing more natural light into the interior than in a conventional office tower, thus contributing to the anticipated 23% overall energy savings. The number of internal walls has been minimised to further maximise the daylight. Carbon dioxide sensors also contribute to the building's energy efficiency and are linked to a demand-controlled ventilation system.

Other environmentally friendly features include the use of low-vapour paints and formaldehyde-free furniture. Concrete surfaces are finished with low-toxicity sealants and, in a further nod to ecological conservation, the floors and ceiling tiles were manufactured with recycled content.