Any addition to an historic homestead involves a delicate balancing act; the new space must respond appropriately to the original style of the house, while also being appropriate for modern living.

This kitchen and family room are in an extension which is part of a major renovation of a 1920s home by Simon Novak of Novak and Middleton Architects.

The original kitchen was positioned adjacent to the former servants' quarters on the south side of the house, with no exposure to natural light or views of the garden.

"Obviously the function of a 1920s kitchen and the function of a modern kitchen are completely different. As the kitchen is now an integral part of family living, a small space tucked away on the dark side of the house was no longer adequate," says Novak.

The new kitchen has been situated next to the dining area, new family room and extensive outdoor living area, to allow an easy flow between these spaces. 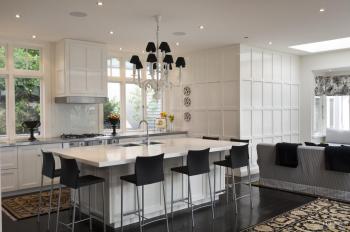 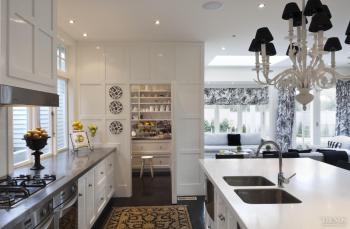 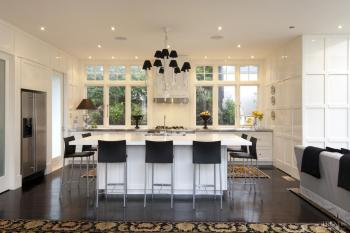 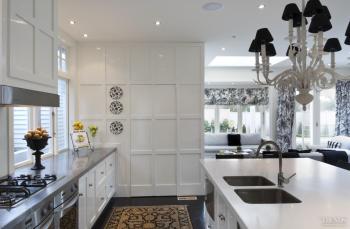 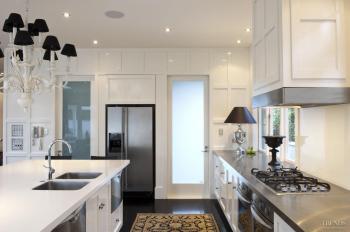 Traditional touches have been included, but with a more contemporary flavour, says the architect.

"For example, there is a 16-seater antique table in the dining area, so I wanted to create a kitchen that would tie in with that and at the same time, add a level of contrast to the space."

The homeowner wanted flexible and convenient workspaces, so Novak introduced a cooking area on the stainless steel benchtop facing the window, with washing up facilities on the island.

For a clutter-free, sleek appearance, appliances are hidden within the cabinetry. In a playful touch, the pantry is concealed behind hidden doors in the wall panelling. This panel detail is continued in the rangehood and into the family room.

"The new panelling in the kitchen has cleaner lines than the original 1920s style would have, which gives it a more modern feel," Novak says.

"The window is a replica of a traditional style, but the white-painted chandelier and stainless steel benchtop add a quirky twist."

At the request of the owner, the entire kitchen has been painted by hand.

"Although it's a low-tech technique compared to what's available these days, hand-painting the kitchen created a wonderful effect," says Novak. "It also means that touching up any paintwork that needs refreshing in years to come will be relatively straightforward."

This hand-crafted finish is contrasted with slick stainless steel and stone benchtops.

Bay windows, a frosted-glass door and a skylight in the family room let light into the kitchen, with task illumination provided by spotlights.