One of the potential drawbacks of living in a densely populated urban environment is the lack of privacy outdoors. A common solution to this problem evolved from the earliest days of serious urban density in Europe, where walled courtyards were used to give households some private outdoor space.

This concept has been revisited by architect Ed Niles in his design of a contemporary city home. The house is located in a busy urban area and surrounded by early 20th century residences in a variety of traditional styles. The design wraps the house's main building around an asymmetrical courtyard to give it a usable and private outdoor living space.

From the outside, little clue is given to the courtyard's existence, with the façade of the home giving the impression that the building extends back uniformly. Only upon entry to the home or directly to the courtyard through a small side door does the form of the house become apparent. The concealed nature of the courtyard is a key to maintaining privacy in the space.

A swimming pool and spa have been built into the ground, with just a strip of paving separating the two. Greenery is introduced through trees planted amidst the paving and also in large planters. The space is furnished with the usual trappings of outdoor living comfort, in the form of cushioned sun-loungers. But in this courtyard decorative pieces have a more prominent presence. 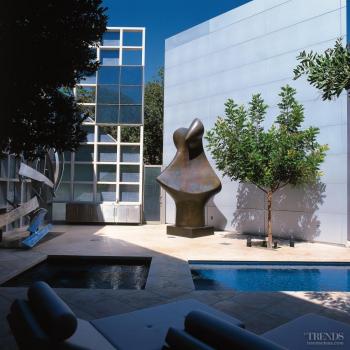 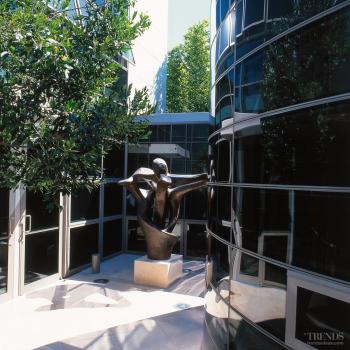 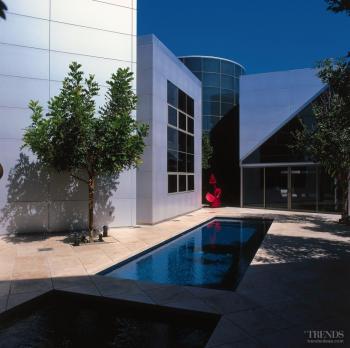 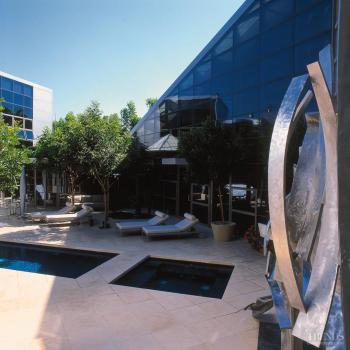 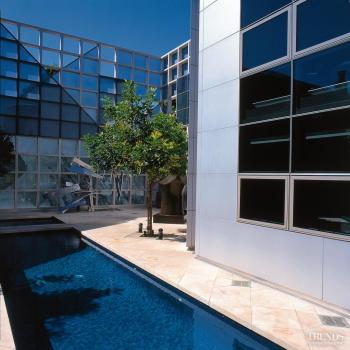 As the owners are collectors of contemporary art, one of the necessary features of the home was an ability to house a variety of artworks as well as the occupants. A number of these works are large-scale sculptures by prominent artists, placed in the secluded courtyard. One of these is located slightly out of view in an alcove created by the home's formal dining room. The dining area extends out into the courtyard, giving it a strong connection with the space and light of the outdoor area.

The usability of the outdoor space is aided by the roof line of the building, which was designed to maximise the sunlight entering the courtyard and some of the home's interior spaces.

"The roof dips down to swallow the sunlight," says Niles.

The central courtyard maintains a connection, both visual and spatial, with the interior spaces of the home in other ways too. Glazed sliding doors at the end of the space allow direct access to the open plan part of the home that contains the kitchen and family area, as well as a separate bar. From there a further set of sliding doors leads to a rear courtyard that also serves the guesthouse at the back of the property.

"In this way, the two courtyards are connected and as you move from one to the other, the quality of the spaces remains the same," says Niles.