Cottage in the woods

This house plays down its scale for a more intimate appeal

Cottage in the woods Discover this article's resources 0

A large, traditional-style country house may feel gracious, but it can translate into a rather formal, even daunting, aesthetic. Bringing a cottage sensibility to the design will make for a more welcoming, relaxed environment.

Achieving this kind of balance was a central concern of the owners when they asked architect Cathy Osika and interior designer Susan Fredman to create their 6000sq ft house. The predominant look was to reflect the old-world charm of a Michigan, cottage-style, white clapboard house, mitigated by an intimate air. The private setting, ringed with mature trees and accessed by a long drive, created an appropriate backdrop for a cottage-like appeal, says Osika.

"To introduce this feeling, we needed to temper the presence of the house. The layout played an important part in this – it ensures the considerable volume is not all seen at once. Because the garage is to one side and the other areas range back and down from the front, all you see at first are the two gables and the connecting ridge.

"A band across the front facade further breaks down the visual mass, and other detailing helped, too."

The front entry porch contrasts solid columns with a soft, curving roof line. Where a strictly formal residence would have displayed brackets under the eaves, here Osika added less formal louvers. Copper detailing and stonework on the bay windows also soften the facade. 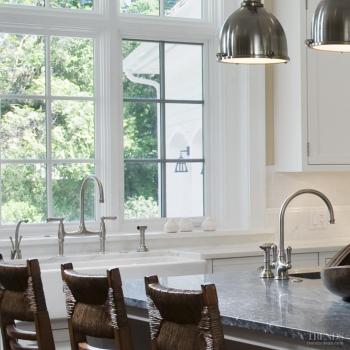 "Windows were an essential part of the design balance," says Osika. "A mix of casement and double-hung elements gives the impression that the house was built over time – much like a real cottage. The small oval window by the front door contributes to this whimsical appearance."

The interiors strike a similar balance between regal and rustic, with detailing playing an important part. For example, the entry hall has a prominent staircase, but detail on the newels is restrained, and stringers are simple. Most crown mouldings are subtle and paneling is transitional.

The layout of the interiors also belies the classic design. The owners are empty nesters, but often entertain their grown children and young grandchildren, and so wanted an open-plan layout that would allow them to keep an eye on the pool at the rear and on the front yard.

"On the first floor, the dining room, family room and breakfast area form a central core. While this floorplan does not provide the separation you would find in a more traditional interior, cased openings create some demarcation between the spaces. Transoms give the casements a rustic look," Osika says.

Despite the open connections, most rooms have their own personality – all tied together by the scraped, beveled warm wood floors that run throughout the house, says Susan Fredman.

"Straight ahead from the front door is the library, which was designed as an adult retreat, in muted tones with wood finishes and a limestone fire surround. Most rooms are over 10ft high – hardly cottage-like, so a coffered ceiling was added here for intimacy.

"The dining room has a refined silk area rug set beneath a long farmhouse table and plush seating – this central space can cater to four or twenty," she says.

Modern appliances are integrated into the cabinetry in the kitchen. Here, in the family room and on the covered, screened porch, the beige and tan color palette gives way to crisp white.

"Exposed ceiling beams extend the cottage-like character to the family room and enclosed porch, which has the same clapboard finish as the exterior," says the interior designer.

"The clapboard creates the feeling that the room was once an outside area.

"Spaces at the rear of the house are the most informal, with several quirky modern artworks and touches such as the eye-catching chairs that look as if they have been upended and dipped in paint," Fredman says.

"Upstairs are a second sitting room and guest bedrooms. The master suite is on the first floor, and has a different feel to the rest of the home," says Fredman. "The owners wanted a spa-like ambiance for their bedroom and bathroom. Treatments are more contemporary, with cream onyx cabinet countertops, clean-lined cabinetry and a glass shower stall."

Despite the scale of the home – there is also a basement complete with media room, playroom, office and gymnasium – the effect is essentially intimate.

"Grace and grandeur are balanced by the overall understatement," says Osika.