High profile is not a phrase normally used in association with a funeral home, but there's no doubt that both the prominent location and design of this new home raise the profile of the business.

Director Phill Jones of Tse Architects, the firm commissioned to design the new Harbour City Funeral Home in Upper Hutt, says the site is right beside a roundabout on an arterial road.

"This is a very high-profile location – it was formerly the site of a post office that the company had converted for use as a funeral home. But it is also is a mainly residential neighbourhood, so it was important that the new building blend in and not look out of place in the low-rise environment.

Associate architect Andrew Bluck says cedar slats across the facade facing the main road introduce a horizontality that also helps to soften the raw, monolithic look of the box-like forms. 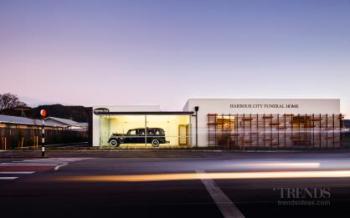 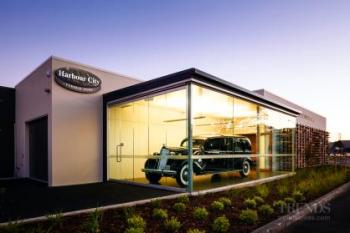 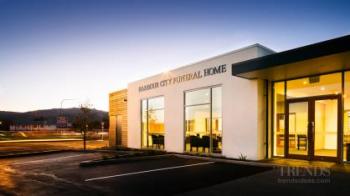 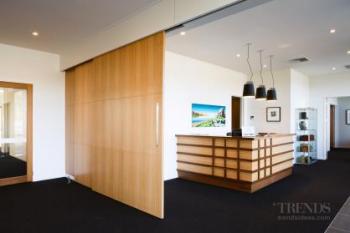 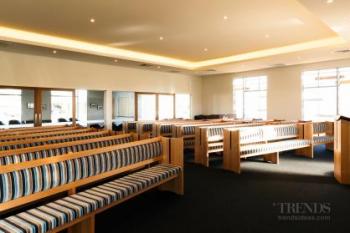 "It provides privacy as well – the screen blocks much of the direct vision into the chapel while still allowing plenty of natural light to flow through. This creates a wonderful play of shadows on the inside of the building, as the position of the sun changes throughout the day."

Another key feature of the exterior is a glass-box garage, which serves to display the company's vintage 1936 Packard hearse.

"This is a recognisable showpiece for the funeral home, and a great advertisement for the business."

Jones says Tse Architects has worked on other projects for Harbour City Funeral Home and had already established an identifiable branding for the company.

"It's a simple, contemporary styling with similar materials – although we don't prescribe a cookie-cutter design, there is a unity to the look."

On the interior, this can be seen in the sleek timber veneers and the design of the reception desk, which features a mix of dark and light veneer.

Bluck says the small size of the original premises on the site was a key reason for the new building, which needed a much more flexible design that acknowledged the sensitive nature of the business. Large operable doors can be used to close off different areas, creating intimate spaces or opening them right up to cater to large groups. The reception area and client rooms can also be used while a service is under way, with no disruption to either group.

The chapel can seat 130 people, but glass sliding doors can be opened up to accommodate another 70 people in an adjoining area. There is also an adjoining refreshments lounge. Other facilities on site include private viewing rooms and administration offices.