Contemporary commercial building in Christchurch with laneway bars and restaurants

As the first permanent buildings to be completed in the former Christchurch CBD Red Zone, the Strange's and Glendenning Hill buildings have caught the eye of designers, developers and locals alike.

Architect Jasper van der Lingen of Sheppard and Rout Architects says this is not surprising, as everyone has been waiting with interest to see what forms new CBD buildings will take in the post-earthquake reconstruction.

"We were the first cab off the rank, so to speak, so we spent considerable time discussing this very issue with the owner, KPI Rothschild Property Group," van der Lingen says. "The city was still experiencing large aftershocks, but the owner was adamant the damaged heritage building should be replaced as soon as possible. We had considerable debate and discussion about the design, and it became clear that the buildings needed to look strong. Being able to see the structure of a building is a visual reassurance that it will withstand future earthquakes."

Van der Lingen says the same owner had only recently strengthened the historic 1882 Bonnington brick and stone building that adjoined the original Strange's building, so it survived the quake. The team realised it could play a crucial role in the design, creating a raw, textural backdrop to a new laneway and courtyard that would be home to a number of cafés and bars.

"The Christchurch City Council is encouraging such mixed-use developments and laneways as part of the urban blueprint for the city. It is all about revitalising the city and making it a lot more liveable and friendly." 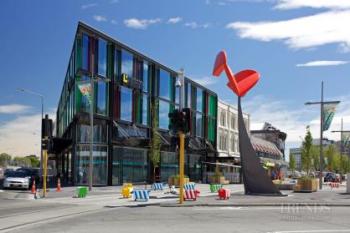 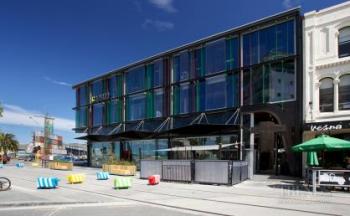 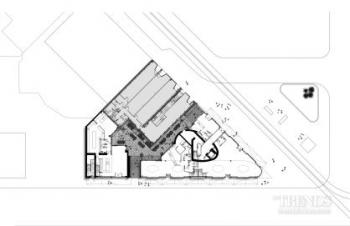 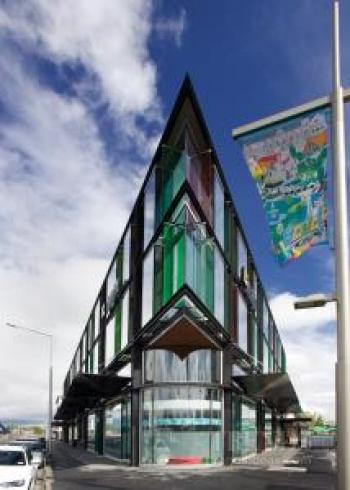 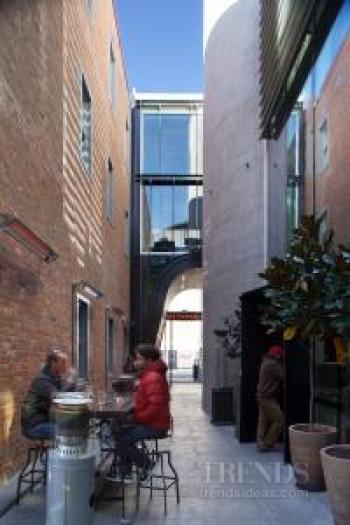 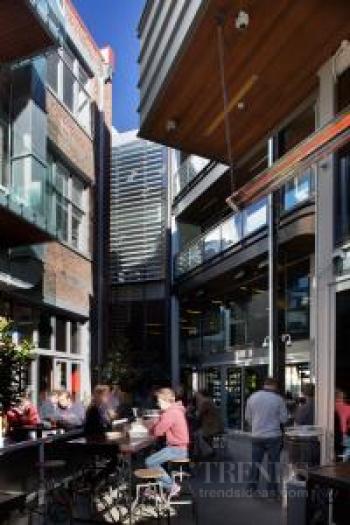 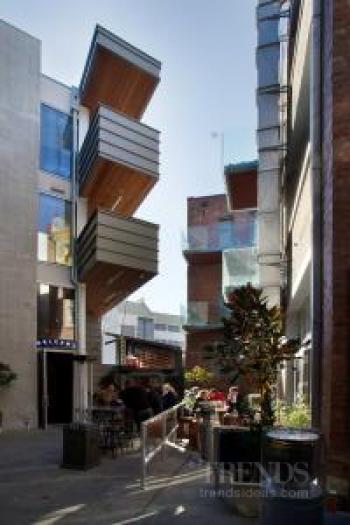 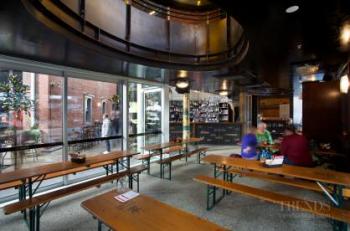 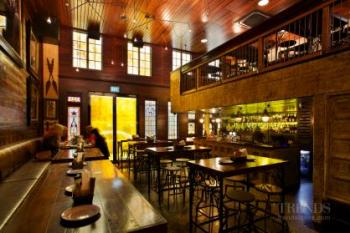 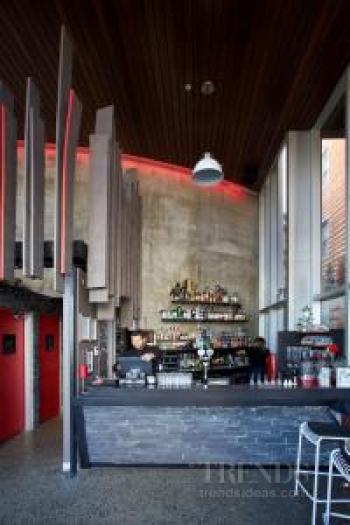 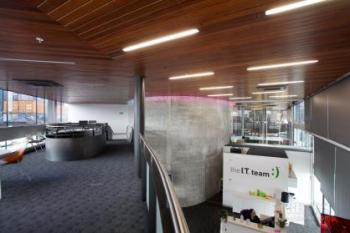 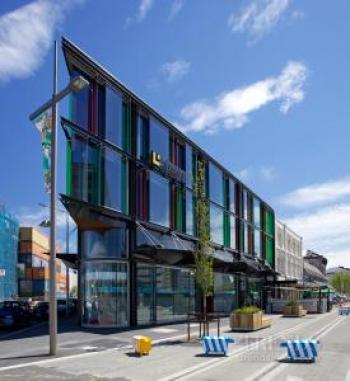 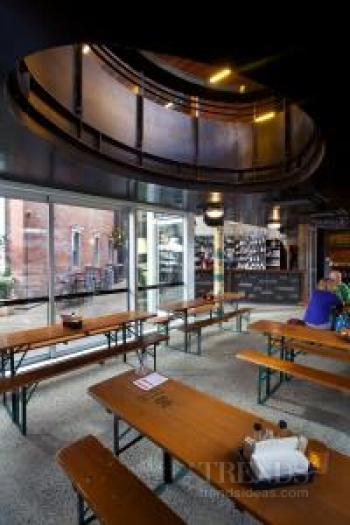 "For the new Strange's and Glendenning buildings, we chose to express the steel framework on the outside of the building, so the bones and structure are clearly visible – the strength can be seen at a glance. The two buildings are seismically separate, however, and the Glendenning building has a Lichfield Street address."

Sheppard and Rout Architects also created a large egg-shaped cylindrical concrete core, which provides the main structural support for the Strange's building. The form of the cylinder, which features concrete half a metre thick, is exposed on all levels, and pops out the top, so it can be glimpsed from many areas.

"The oval shape is one of the strongest forms in nature," says van der Lingen. "The client wanted a building that would last forever. It wasn't enough to just meet earthquake codes – we needed to surpass them, so this building is built to IL4 level, which is usually restricted to emergency facilities. This means the building is built to a standard that is 188% of the earthquake code for Christchurch."

Various services are contained in the core – it accommodates the stairs, lifts, and a number of utilities, including bathrooms, ducts and switchboards.

The prominence and consequent significance of the corner site was also recognised. Van der Lingen says the building needed to make a strong statement, but the team wanted to reference the historic predecessor at the same time.

"The glass facade is an abstract representation of the old heritage buildings that lined Lichfield St," he says. "The windows are all vertical, with deep recesses that create shadows and stringlines – they define the position of the floors inside. The vertical panels are set in and out, which repeats the rhythm of the fenestration on the Bonnington building next door. To achieve a real depth of shadow we added coloured fins to the panels. These also help with sun shading at certain times of the day, and they cast interesting coloured patterns on the interior."

The pointed end of the building, at the junction of the roads, is a key focus.

"The original building had a curved end that went right the way up," says the architect. "We felt the end should be rounded at the lower section, where people circulate around the building, and can see and touch the glass. But on the upper storeys we went for a sharp edge to the acute angle, which is an urban gesture to the city – it clearly signals the prominence of this corner site."

While offices occupy the upper levels – the top floor is tenanted by the builder Leighs Construction – the lower level is given over to five café-style bars, namely Lower 9th Diner, Nucleus, Orleans, Strange & Co and Vespa. All the venues open into the new laneway and courtyard, which is entered from both High and Lichfield Streets. There is a new gateway between the old and new buildings on High Street.

"Here, the dark steel framing curves down to the ground, referencing the old brick arch that was the entry to the original building," says the architect. "It creates a portal between the street environment and the laneway. It also adds a little drama and a sense of theatre, and it is lined with timber, just like the interior of the bars that follow."

Two of the bars have mezzanine levels, including one with two large oval openings edged with blackened raw steel.

"There are four of these large oval holes in two mezzanine floors," says van der Lingen. "They were a novel way to ensure the floor area of the mezzanine levels remained under the maximum coverage allowed. The blackened steel imparts the semi-industrial look we wanted, and the oval shape echoes the form of the oval support column."

Tom Newfield, operations manager for Britomart Hospitality Group, the owner of the Orleans, Lower 9th Diner and Strange & Co venues in the Strange's building says his business benefits from the synergy created by the laneway courtyard.

"We have been open for just two months and although the CBD is still a barren wasteland, the venue is drawing people back into the city. There is a gathering of momentum and energy, with the venue filling the void as a late-night destination."

Newfield says the design of the restaurants and bars reflects the international trend towards more casual, informal dining.

"The way people socialise is changing," he says. "So we have created a very relaxed vibe, with interiors that pay homage to the heritage aspects of the site. The Strange & Co bar, for example, has an industrial workshop aesthetic, with raw exposed concrete and polished timber floorboards. The restaurants also reflect an international influence, and were inspired by Southern American cuisine."

The Orleans restaurant, which is reminiscent of an old rustic saloon, uses recycled materials from demolished Christchurch houses, such as jarrah wood and pressed tin ceilings. The Lower 9th Diner recalls an abandoned overgrown theme park.