Traditionally, High Street buildings have provided retail facilities at street level, with commercial tenancies on the upper floors. It's a formula that hasn't changed in centuries, but the Christchurch rebuild is providing opportunities for developers and designers to literally think outside the square, as this project shows.

"This is a very high visibility triangular site, at the junction of two main streets, and the owners were keen to maximise this exposure," he says. "We designed the building to have a transparent ground floor to promote an engaging retail frontage – the Spice Paragon restaurant has subsequently taken the tenancy."

Elvidge says the site boundaries excluded the very tip of the triangle.

"We wanted to avoid a stubby end to the building, which would have been the result if we had built right up to the boundary. So we sculpted the end of the building, putting a slight kink in the structure to provide a pointed end. Horizontal louvres enhance this sharp leading edge. At street level, however, we left enough space for a small area of outdoor seating at the apex." 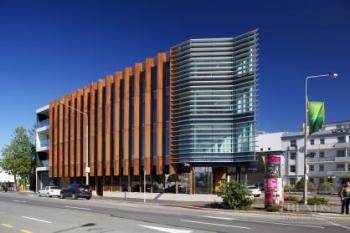 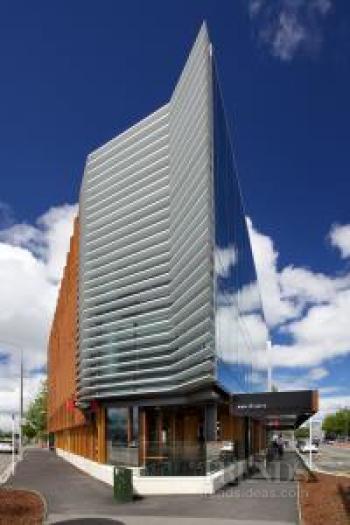 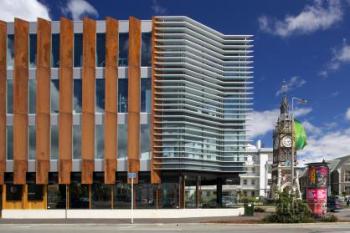 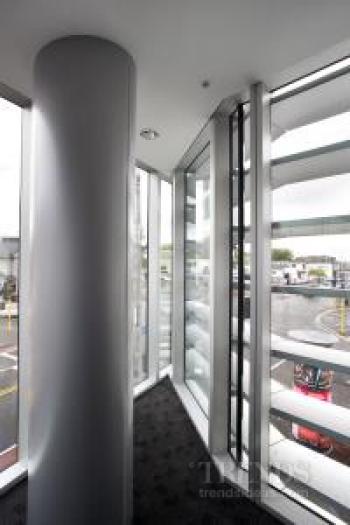 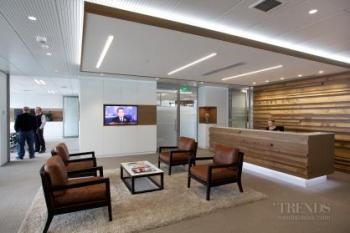 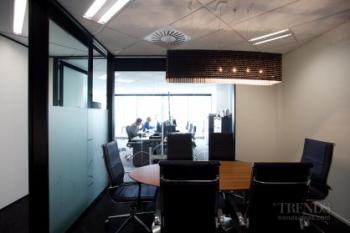 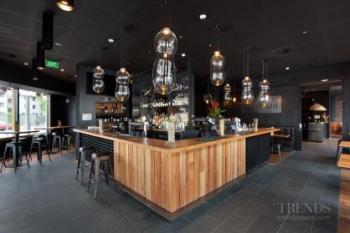 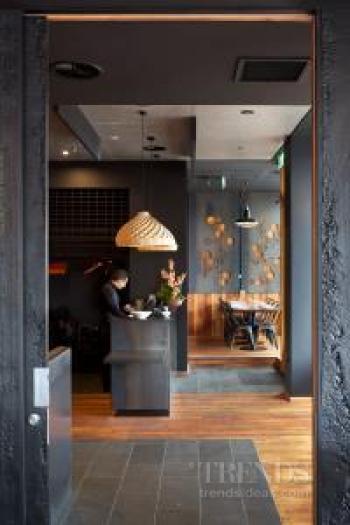 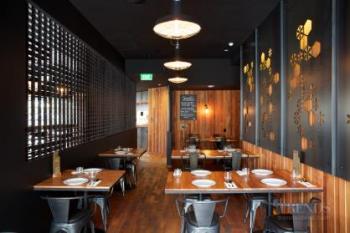 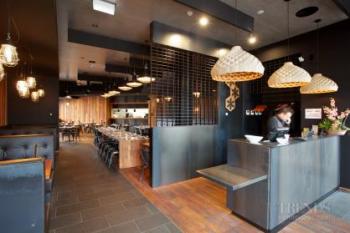 The architect says the owners have a farming background and expressed a desire for the building to feature natural materials.

"The clients requested a town-meets-country approach. We chose a rich material palette that speaks of rural and urban imagery. The northwest elevation features Corten steel fins – we call them billowing fins as they have a slight curve. The rusted, weathered patina complements the oiled timber that lines the recessed areas at ground level. The fins also provide essential sun shading to the office floors, which means office workers rarely need to pull the blinds. This in turn helps to activate the exterior of the building, which adds to the vibrancy."

A local Mt Somers limestone features at ground level, while Timaru bluestone clads columns and a long feature wall in the entry foyer. This is a highly textural volcanic stone with air bubble fissures.

Elvidge says the stretched glass facade on the other side of the building creates a simple, calm backdrop to the historic clock tower that was restored following the earthquakes.

"Overall, the finely detailed language of this building provides a contemporary response to the highly detailed, yet traditional nature of the clock tower."

The Spice Paragon restaurant and Khao-San Road bar on the ground floor reflect a similar attention to detail. Designed by Crafted, the bar and restaurant echo a theme established by the company when they undertook an earlier commission for the restaurant in another part of the city.

Designer Callum Pankhurst says for this project, key motifs and colours are similar to the first restaurant, but the client wanted something a little different in terms of the material palette.

"The client specifically requested a very raw, semi-industrial aesthetic. Consequently the restaurant features a lot of hot-rolled steel and distressed-grade red beech that has a warm, recycled look. This timber is milled from trees that have been attacked by borer, so the holes and knots create added visual interest. We have also oiled the timber and it is maintained by waxing, so it will develop a rich, weathered patina over time."

Hot-rolled steel was specified for the cashier desk, wall panels and laser-cut screens.

"Because some parts of the hot-rolled steel cool faster than others, it has interesting tonal variations," says the designer. "The hexagonal laser-cut motifs on the wall screens repeat a branding theme that appears in a lot of the Spice Paragon marketing – the shapes reference spices, in particular star anise. These are illuminated by LED lighting, so the hexagons glow out from the dark steel."

Other lattice-work screens divide key areas of the restaurant, and also feature on the front of the bar. These are made from interlocking flat steel, with minimal welding.

"These screens create privacy and intimacy, but with a degree of transparency," says Pankhurst. "They provide a theatre of movement, and also convey a slightly Oriental lantern effect that is appropriate. Although the food in the restaurant has a Thai base, it also has a strong Western influence, so there was never any intention of providing an especially authentic Thai decor."

Another key element in the interior is a long black wall made from a Muros fibreglass product. Pankhurst says this conveys the texture of shuttered concrete, but was a much more cost-effective way to achieve a similar look.

Not surprisingly, lighting plays a key role in setting the ambience. Crafted specified custom hand-blown pendants from Denmark, which create a talking point in the bar.

There are also suspended black tube lights that provide ambient light and help to enhance the intimacy of the space. Baffles in the ceiling, which reduce noise levels, are additional features.

In keeping with the theme, much of the furniture is steel, including the chairs and bar stools. Bench seats are in timber and black leather.

Pankhurst says the success of the project can be attributed to the close collaboration with the building owners and the other consultants.

"There were a lot of challenges to work through, especially in terms of the fire code, but now the project is finished, it has achieved everything we – and the restaurant owners – wanted."