Planning an extension to a landmark heritage building in the 21st century is all about respect, not replication. But the design of the new contemporary art gallery to be built alongside historic Lopdell House in Titirangi, Auckland also presented other challenges, says architect Julian Mitchell of Mitchell & Stout Architects.

"Clearly, the modern building needed to sit comfortably beside the heritage structure, while presenting a new architectural expression," Mitchell says. "But we also had to work with a very steep site that has a three-storey drop-off from front to back, and a relatively tight footprint.

"There was also the challenge of the light. Modern architecture is all about the way a space responds to natural light – as architects we are always looking for ways to open up an interior to the light. Art curators, however, request closed-box gallery spaces that they can light artificially. This was one of the key reasons that Lopdell House, with its abundant large windows, was unsuited to provide the required gallery spaces."

All these factors helped to determine the design solution. This was aided by the architects' earlier involvement with the restoration and earthquake strengthening of Lopdell House, which is owned by Auckland Council and administered by the Lopdell House Development Trust.

Mitchell equates the building to a 3-D jigsaw puzzle of interlocking forms, with deep fissures and skylights designed to bring natural light deep down into the interior. 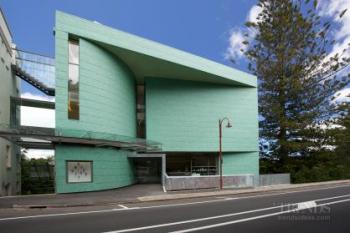 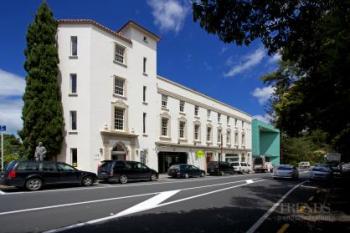 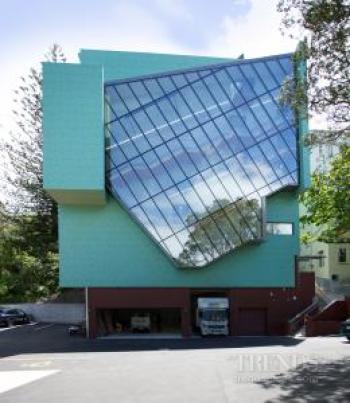 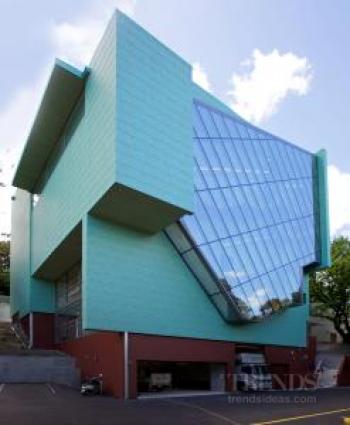 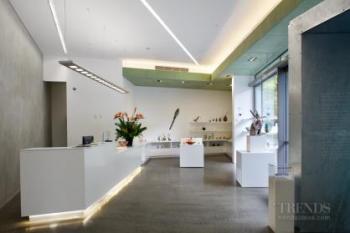 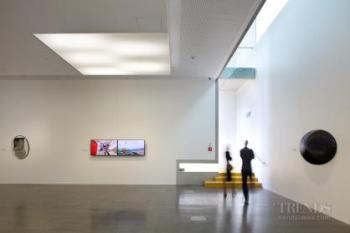 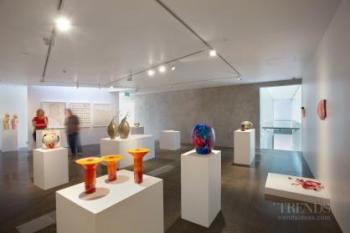 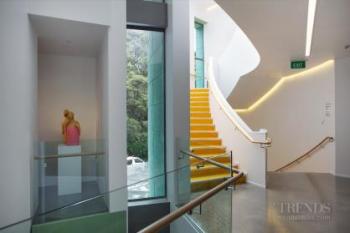 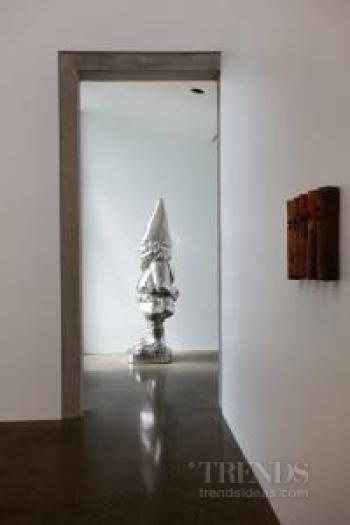 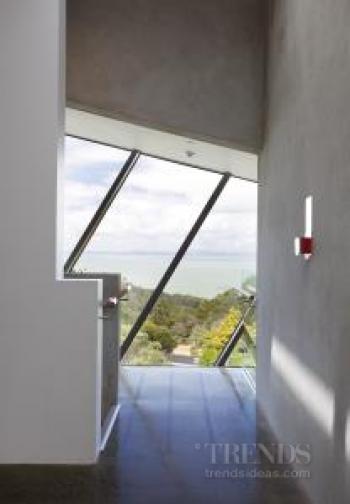 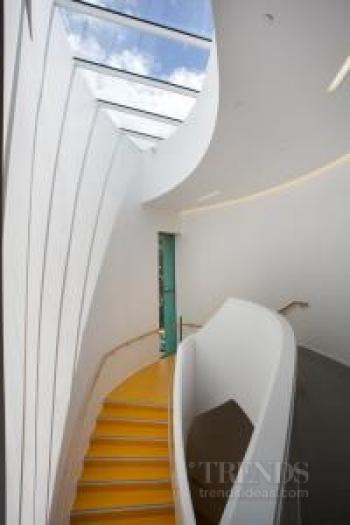 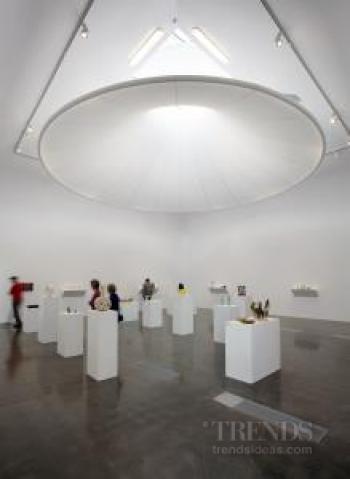 "It's a fairly square site, and subsequently a square building, but one of the walls on the front elevation is pushed back from the street to allow natural light to penetrate the teaching spaces on the lower levels," the architect says. "The wall on the opposite side of the entry curves around towards the door, so it feeds visitors into the building. Pulling the facade back from the street, and introducing the curved wall was also a way to give the building a sculptural form."

The gallery is the same height as the heritage building, and features a similar band across the top of the flat-roofed street elevation.

Mitchell says the choice of cladding was long debated, and resource consent was gained for the use of green, pre-patinated copper, which has a lifespan of 200 years.

"However, cost considerations, and a potential problem with guarantees for the aluminium joinery that would have abutted the copper meant we needed to look for a different, but similar alternative. We chose pre-painted aluminium folded in the traditional European manner. It has a tile-like look with a stippled, textural finish. This was never intended to resemble faux copper – it is a totally different material with its own character. But with the resource consent already provided, it made sense to retain the soft green palette."

The south facade of the building features a large, fully glazed commercial curtainwall positioned on a 45° angle. The curtainwall encloses a secondary stairwell, and is separated from the gallery spaces by an internal wall.

"Putting this diagrid element on an angle gives it visual energy," says Mitchell. "The glazing also allows people using the stairs inside to appreciate the magnificent bush and harbour views, and the people travelling through this circulation area help to animate the exterior."

Similarly, the long slot windows in the building, which bring light into the main spiral staircase and landings, are enlivened by the foot traffic inside.

The architect says the form of the building was also influenced by the need to provide a variety of gallery spaces of different sizes.

"This modulation meant we could utilise the idea of tension and release – visitors move from the bright, light and airy circulation areas with their expansive views, to the compressed, internal gallery spaces.

A dramatic spiral staircase links all the main floors, with LED cove lighting accentuating its sculptural form. On the top level the stairs open to a stair bridge across to the rooftop terrace on the old building. Another bridge, used by staff, links the two buildings at a lower level.

Openings between the gallery spaces and circulation areas bring indirect natural light into the galleries while avoiding damaging UV rays.

"They also provide a peep into the exhibition spaces beyond, so they have a curiosity value," says Mitchell. "People can look across voids to another gallery, and they can see a little of the artwork on show."

The large gallery on the top level reflects a more unusual approach to light control – the design team created a large, lantern-like light diffuser that sits directly beneath a central skylight.

"When light is reflected off a surface, the UV rays are reduced by 50%," the architect says. "If they then bounce off another surface they are reduced by an additional 50%. We applied this principle here. The direct light is initially mitigated by a series of fixed louvres on the skylight, which are set at different angles to avoid direct sunlight. The light reflects off these louvres first, then it bounces off the diffuser, back up to the curved walls that form the ceiling, before being reflected back down. The UV levels are reduced with each reflection.

"It is a simple construction – essentially it is a large piece of fabric stretched between two concentric steel rings, one large and one small. But it does have a quality that is a little reminiscent of the work of sculptor Anish Kapoor."

Mitchell says the design team was aware of the need to ensure the architecture would speak for itself and not detract from the art.

"In designing a gallery there is always a fine balance between architectural expression and providing a great exhibition space. A successful gallery will always do both."