Initially contracted to design a remodel, the designer of this new house says the project escalated until it became clear the only option was to simply start over.

Fu-Tung Cheng of Cheng Design says the owners of the existing house on site required a larger home that simply could not fit into the same footprint. Building anew was a better way to achieve what they wanted, and it did not need to cost much more than a total renovation.

"Their home sat in a neighborhood of houses in a similar traditional style – there were plenty of quaint gabled rooflines," Cheng says. "But what they wanted – and what was ultimately proposed – was a complete departure. The owners had seen my work with concrete on smaller jobs and loved the modern aesthetic, and we could see there was a potential to do something similar on a much larger scale."

Cheng says that in experimenting with concrete walls, he wanted to move away from the "ordinary". In doing so, he took a very hands-on approach to the house construction.

"We chose to pour the concrete in stages, so it could be manipulated every step of the way. The formwork of each stage was just 4ft high, and was wrapped in shiny Formica, which imparted a great sheen to the concrete. Concrete can appear as a very cold, forbidding surface, but these walls have a blue-black tint and are hyper smooth and inviting to touch. 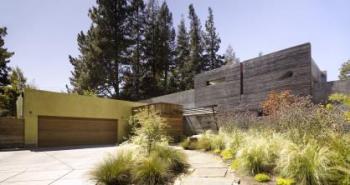 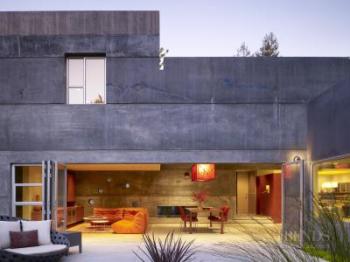 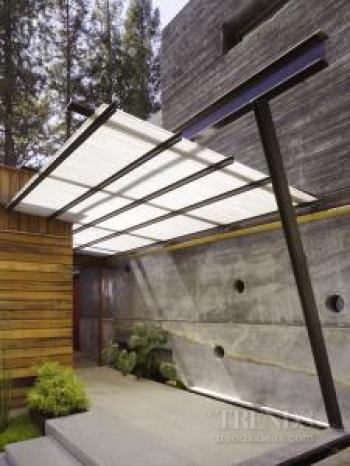 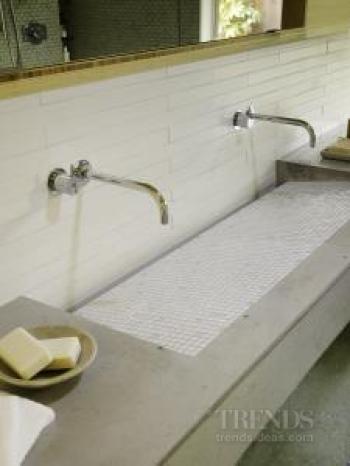 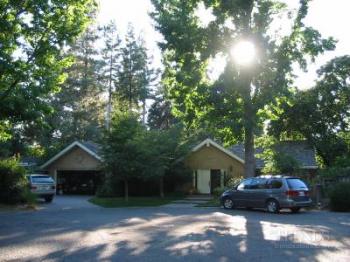 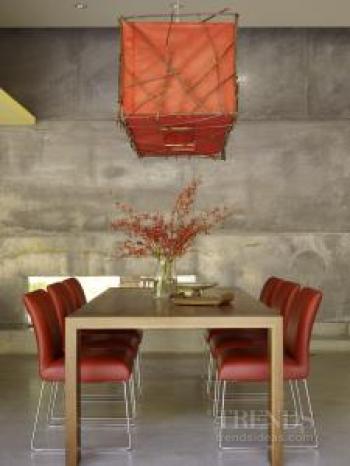 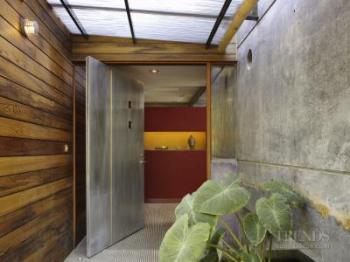 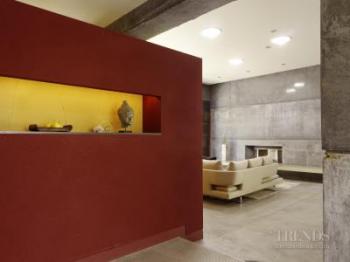 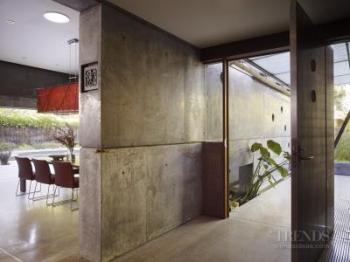 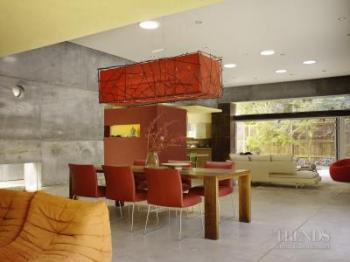 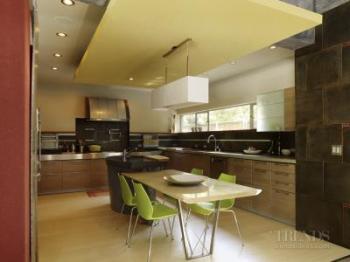 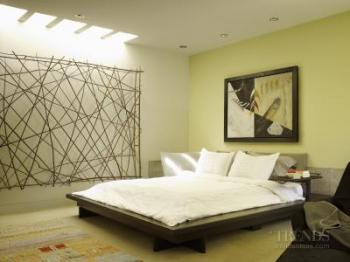 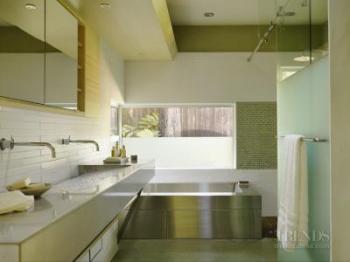 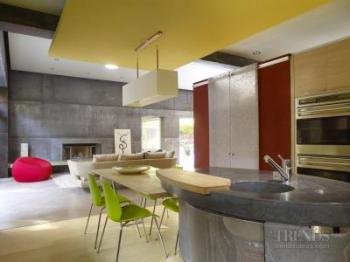 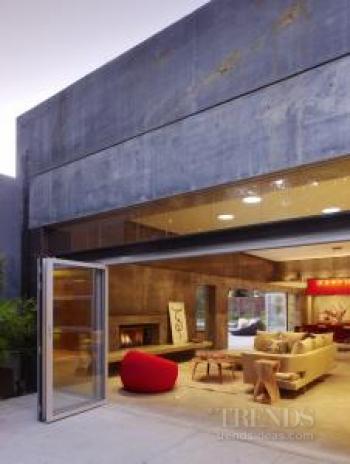 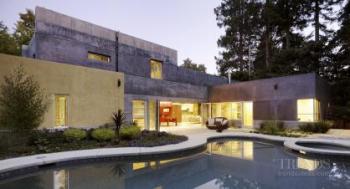 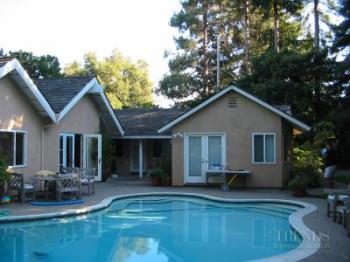 "Once the concrete was poured into each section, I introduced streaks of amber-colored concrete that could be pushed down into the walls. For added visual interest at the front of the house, the upper concrete walls were striated to resemble geological strata bands."

Cheng says the resulting walls, which are 14in thick, with 3in of foam insulation, convey a strong sense of substance and permanence. And because they make up the entire wall, there is no need for wallcoverings or veneers.

"We introduced porthole windows to the walls in irregular positions, and added an elliptical-shaped window to the upper level. These apertures highlight the thickness of the concrete and you get a strong sense of the real mass of the house – it is almost castle like. And it has a solidity that simply cannot be replicated in a house built from wood."

In contrast, a lightweight, translucent canopy defines the entry, which is through a large zinc and brass pivot door.

The concrete side wall extends right into the house, forging a connection between inside and out, and helping to screen the living area from view. An outdoor-indoor fishpond beside the entry, flows beneath the wall to the inside of the house.

To relieve the austerity of the concrete walls and flooring, another wall beside the entry is covered in Japanese plaster in a rusty brick tone, with a glowing, illuminated yellow shelving niche.

"It was important to keep the interior warm and inviting, and this applied to texture as well as color," says Cheng. "We were constantly looking for materials that would have a tactile finish, to contrast the very smooth concrete."

Two suspended ceilings in the main living area feature Japanese plaster mixed with a fine wood fibre. This imparts a textural quality that helps to warm the space, visually. Similarly, a large red paper lantern with twig-like framing, is a bold contrast to the gray concrete.

To bring natural light into the heart of the open-plan living space, Cheng introduced irregularly spaced solar tubes to the ceiling. These mimic the form of the port holes on the exterior walls and serve a similar purpose.

In the main living room, the focus of attention is the inset fireplace within the massive concrete end wall. Here, the concrete poured for the cantilevered hearth is a soft olive green shade.

Concrete also appears in the kitchen, where it forms a conical island with a 5in-thick countertop, sculpted to create an organic form, and to provide estuary drainage from a cutting board. The solid, anchoring bulk of the island is balanced by the lightweight form of an adjoining wood table top, which has fine steel legs.

Another concrete countertop runs along one wall, while the rest of the work surfaces are stainless steel.

The kitchen features another of Cheng's designs – the rangehood with Zephyr ventilation is from the designer's own collection. All these elements are complemented by a bank of European Alno cabinetry in a light wood veneer.

Other highlights of the living space include extra-wide openings to two terraces, which enhance the connection with the outdoors. One opening is straddled by a massive steel I-beam, with clerestory glazing above. This creates the illusion that the heavy concrete wall is suspended on top of the fine glass, which suggests a contradiction in terms.

"On the outside of the house, we did keep a reference to the original property," says Cheng. "The swimming pool is essentially the same organic shape, but we added a spa pool, and re-paved and re-landscaped the entire area. There is now a much better flow between the indoor and outdoor living areas."