With its soaring, multifaceted roof line and glazed gable ends, this house was designed to frame a spectacular view

There's a school of thought that says a great view should speak for itself, so it can be enjoyed without distraction by ornate architecture and interiors.

It's a philosophy that influenced the design of this large house on the hills above Lake Wakatipu in Queenstown.

"They liked the alpine roof forms and the local schist stone, which is so much a part of the region. But they were also very familiar with Colorado Rocky Mountain architecture. Essentially, the house blends these two styles. The roofs are steep pitched, but they have low-level gutters so the wings of the house appear to hug the landscape."

Cameron says that although it is large, the house appears as a village of gabled volumes linked together. 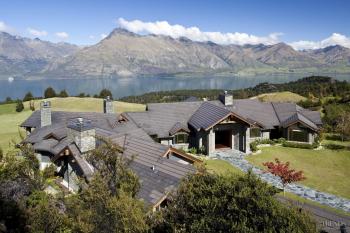 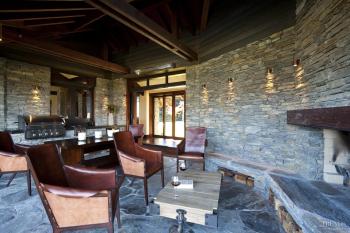 "This prevents the scale of the house from being too overwhelming. The roof comes down low over the entry, so there is a real sense of intimacy and welcome."

Cameron says that while the mountain and lake views were the foremost consideration, the architecture is also a response to the shape of the building platform, and the need to maximise the sun.

"As with most Queenstown houses, the views are in one direction and the sun in the other," he says. "Our solution was to wrap the wings of the house around the building platform, thus creating a sunny courtyard at the front."

A wide circulation passage along the north side of the house ensures that while all the main rooms open up the views to the south, they can also benefit from the sun in the north.

Each glazed gable end is positioned to maximise a particular slice of the view. At the entry, for example, the doors open to reveal a view right through the large open-plan living room to Walter Peak across the lake. The soaring ceilings, with their exposed beams and trusses, also help to draw the eye up and out to the view. But Cameron says the ceiling drops down lower above the fireplace and formal dining area to enclose these areas for added comfort.

Builder Gary Burnett says each beam and truss is made from Oregon pine, but has a 20mm skin of Tasmanian oak. This was a way to provide the high level of finish required by the owners, who wanted the house to have a comfortable, informal elegance.

"The finishing conceals the massive structural support that was required for the concrete tile roof, which weighs about 70 tonnes," Burnett says.

The material palette of the exterior continues inside the house, reinforcing the visual link between inside and out. Schist, which clads the exterior and forms the terraces and paths, also features on fireplace surrounds and columns. Tasmanian oak wood panelling and dark-stained French oak flooring contrast with off-white walls.

American interior designer Marian Wheeler of Wheeler Design Group, who worked with Jane Low of Jane Low Design in Auckland, says the furniture needed to match the huge scale of the rooms and the high ceilings. Consequently, the sofas are large, with high ends.

"It was essential to respect the view," Wheeler says. "Fabrics and colours had to be quiet and understated, so the view could be the centre of attention. For this reason, also, we have not placed any bold art works that would compete with the view, and there are no drapes. Interest is provided by contrasting textures in the fabrics. Because of all the glazed surfaces, we chose sun-resistant fabrics that would also provide some acoustic insulation."

Other furniture pieces in the living room include a large, backless day bed that sits in the window, providing an ideal seat or lounger for one or more people.

"We call this the sweet spot," says the designer. "It has an intimacy with the view, but is also close to the fireplace."

The kitchen is positioned at one side of the living area. Here again, dark-stained Tasmanian oak features on cabinets, which have Five Star granite benchtops. On one side there is a pass-through to a sheltered loggia with a separate outdoor kitchen and fireplace.

A wood-panelled library occupies a smaller gabled volume. This room also has its own fireplace, and an adjoining wine cellar behind glazed doors.

"Rather than have the cellar hidden away in the basement out of sight, we wanted it where we could enjoy the sensory input," says one of the owners. "The visual aspect is an integral part of the whole experience of being in the library."

"The library is a very intimate room, without large windows," says Cameron. "But there are small dormers, and doors that open onto the sunny circulation spine on the north."

Another gabled volume accommodates the master suite, where the bed is placed to maximise the views. A fireplace in a subtle stone surround enhances the sense of cosy retreat.

Other rooms include several guest suites and a large gymnasium on the lower level, which is also a media room.