Campus-style working environments are a reflection of modern business thinking, which prizes open communication and transparency

The onward march of technology has had many influences on commercial architecture. In the past that tended to centre around the materials or machinery used in construction. An emerging trend in recent years has been directly influenced by the work environment itself, as businesses eschew the hierarchical structure of high-rise towers for open-plan offices. This has become known as campus-style corporate architecture.

The latest development to follow this style is the new Auckland head office for Telecom New Zealand. Telecom Place comprises 30,000m2 of office space spread across four interconnected buildings, none of which is taller than eight storeys.

Originally conceived as four separate buildings, since its completion Telecom Place has garnered positive reviews for its integrated design.

"By combining four buildings into a linked campus under a glass atrium roof, the project really pushes the boundaries of commercial office design, development and building in New Zealand. 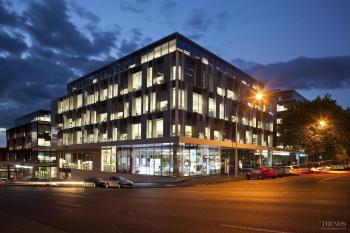 "I believe other large corporates can learn from the Telecom Place model and indeed, many are adapting the traditional office model to fit a sustainable framework, taking into account the way people work now, the way they get to work, company culture, cost savings and the environment."

"We have an opportunity," says Mansons TCLM director Culum Manson, "with the revitalisation of this quarter of the city, to create not just campus-style buildings, but an entire campus precinct centred around increased pedestrian access and businesses that are engaged at a street level."

Situated across the road from Telecom Place, 162VIC, the company's next development, continues this theme.

"With this new venture, we've taken the concept we began with Telecom Place and applied it to a single-building development," says Manson.

"Large, efficient floor plates make use of open sightlines to foster interdepartmental communication – a key component of the Telecom design."

Sustainability, too, plays a crucial role, with Telecom Place taking a leading role.

"Almost all new large office developments have some element of green, but I think Telecom Place goes beyond this to embrace sustainability in a very innovative and progressive way," says Townsend. "The building's location, water consumption features, lighting, temperature and electricity consumption, as well as interior fit-out, were all exhaustively scrutinised to ensure that Telecom Place exceeded expectation. This approach earned the development a coveted, and well-deserved, 5 Green Star – Office Design rating from the New Zealand Green Building Council."

Even relatively simple concepts have the ability to shape the way staff interact with the workplace on a sustainable level, says Manson.

"Telecom New Zealand invested a lot of time prior to construction analysing staff movements, and determined that the site's proximity to public transport meant a greater emphasis could be placed on encouraging staff to commute to work, leaving their cars at home.

"As a developer interested in sustainability, we felt that this was an element we could incorporate into 162VIC."