The natural environment can be a strong design influence, as this project shows.

"The house is a refined expression of the materials that feature outdoors," he says. "The glazing complements the translucency of the water, while the wood, stone and raw concrete reference the trees and natural stone."

This contrast can be seen to good effect in the kitchen, where flush cabinets in European white oak are paired with a large, rustic slab of maple wood. The maple forms a wide bar top for a casual dining area at one end of a long island. It also provides a strong textural element that is a visual link with the natural surroundings.

A Pennsylvania bluestone tiled floor, which extends out to the terrace, reinforces the connection between inside and out. Similar bluestone features on a wall at one side of the kitchen, which forms the spine of the house. 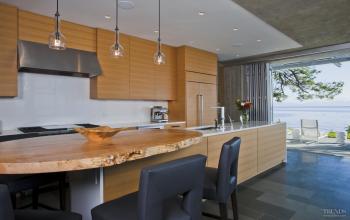 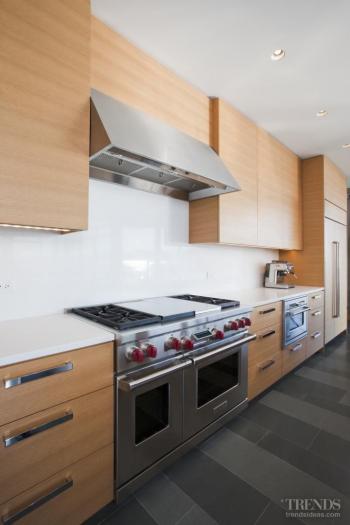 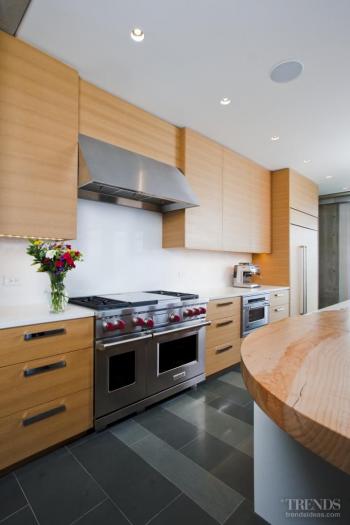 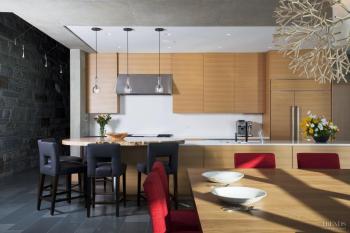 To minimise the intrusive nature of large appliances, the refrigerator is integrated into the wood cabinetry. Clutter is also minimised by having a second working kitchen directly behind the perimeter cabinets. This provides ample storage for long-term supplies.

"Although the location is isolated, the owners do entertain often, with guests staying over," says the architect.

In addition to a Viking double oven, there is a single under-bench oven on the same wall in the main kitchen. The microwave oven is in the rear kitchen.

There is also plenty of space for several people to work in the kitchen at once, thanks to the long white Okite quartz benchtops on both the island and perimeter cabinets. The backsplash is also in quartz, which reflects light back into the kitchen, enhancing the contrast between textural and smooth elements.