Transitional cathedral by Warren and Mahoney

Rebuilding an earthquake-damaged city is probably a 20-year project, but the completion of the Christchurch Transitional Cathedral sends a clear message that the city is back in business. And it's not just the speed of the design and construction that's attracting attention – the architecture also breaks new ground.

While the concept of a cardboard structure is not new – Japanese architect Shigeru Ban has created such buildings elsewhere in the world, including in Kobe after the 1995 earthquake – the installation of cardboard tubes on a sloping angle is a first.

Architect Peter Marshall of Warren and Mahoney, the architects for the Anglican Diocese who were charged with realising Shigeru Ban's concept, says the project was one of the most intriguing and complex projects the firm has been involved in.

"Geometrically, the structure is unique," Marshall says. "The cathedral is trapezoidal in plan with a raking ridge that soars to the height of a six-storey building. With the sides of the building also on a rake, and a twist, the 3-D geometry posed challenges for the documentation and construction."

Marshall says computer modelling and extensive testing of the cardboard tubes and polycarbonate cladding resulted in several changes to the conceptual design. 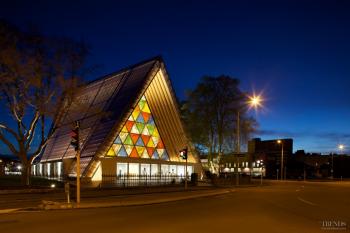 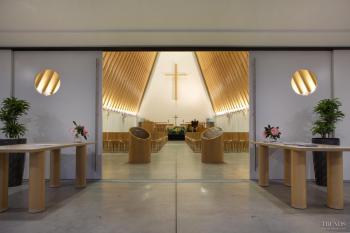 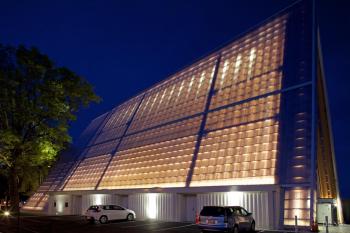 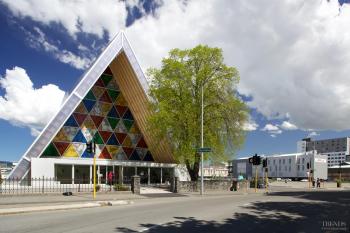 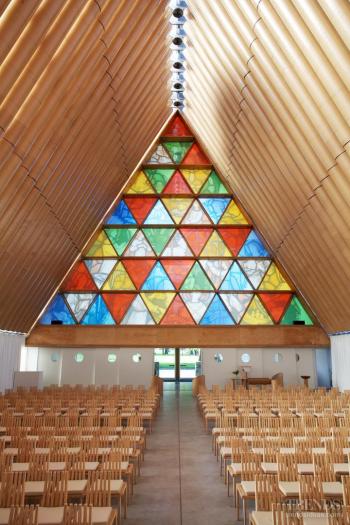 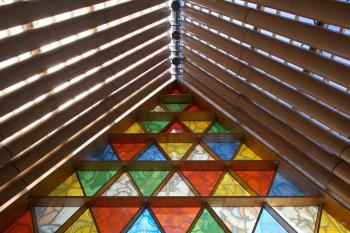 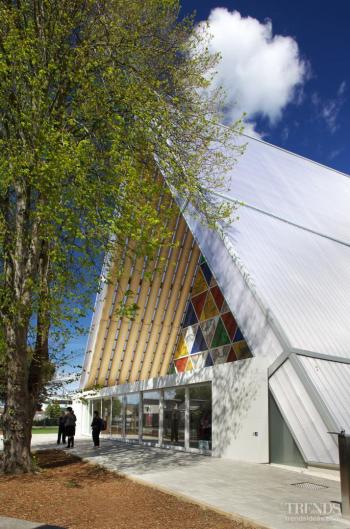 "It was originally intended that the cardboard tubes would be held in place by their own weight and fixed to the underside of timber trusses. It became clear that this would not work, so LVL beams, some of which are more than 20m long, were inserted into the tubes to strengthen the structure. The detailing of the various junctions and flashings was also refined to ensure they could withstand the wind loading and be watertight."

Shipping containers – a relocatable building option used for retail facilities elsewhere in the city – are positioned at the base of the building where they house chapels and administrative facilities.

Marshall says despite the technical challenges, the concept for the cathedral was essentially simple and innovative.

"The structure is very expressive and conveys the sense of something special," he says. "Because the polycarbonate cladding is almost transparent, light shines through, illuminating the entire building. The stained glass trinity window facing north is also a clear church symbol, and a visual link to the celebrated rose window in the former cathedral.

"On the inside, the sheer volume of the interior and the soaring height reference traditional cathedrals and the way these are designed to raise the eyes upwards. Shigeru took height and width measurements of the original cathedral so that the dimensions of the new structure would be similar."

Marshall says the building's powerful presence can also be attributed to the materials and the way these define the structure.

"The reinforced cardboard tubing expresses both the architectural form and the structural support, which is a particularly pleasing result."

The gradual change in the pitch of the roof – from 70° at one end to 50° at the other – is another significant feature.

"The twist creates a sense of movement and drama, which gives the building a much more interesting architectural form. There are just two narrow polycarbonate panels from top to bottom, and each section twists slightly. There was enough play in the interlocking detail to allow the twist to occur."

Because the polycarbonate is a twin-walled material, it has insulating benefits. The architect says the cardboard also helps with insulation, noticeably mitigating traffic noise, even though there are 150mm gaps between the tubes. And heating cables within the concrete floor slab help to keep the interior warm in winter. Automated vents at the top and bottom of the opposing ends of the building provide cross ventilation when required during the hot summer months.

Initially, it was expected that the Transitional Cathedral would have a life span of around 10 years, and would be in use while the replacement cathedral was constructed in the square. However, Marshall says even a temporary structure has to meet required building codes, which means it can endure for 50 years.

"At the end of its time here, it can be repurposed, or dismantled and rebuilt somewhere else. For now, however, the completion of the building, albeit a transitional building, sends a strong signal that the city is on its way back. With the international benchmarking through the involvement of Shigeru Ban Architects, the interest from overseas has already been immense and this can only be good for Christchurch."