Designed for a Cordon Bleu-trained chef, this new kitchen brings a modern, European flavour to a Victorian residence

Old-world charm is a large part of the appeal of a heritage home. But traditionally this character was not something that carried through to the kitchen, which was often relegated to a small, dark room at the back of the house.

Such was the case with the Second Empire Victorian home featured here, which was built in the late 1800s. Architect Barney Maier of Feinmann Inc says while the home was attractive from the outside, it was a different story inside.

"The kitchen didn't reflect its old-world charm – it just looked worn," he says. "Small windows and an inadequate amount of lighting, though not unusual for a home of this age, did not help."

Maier says one of the owners is a Cordon Bleu-trained chef and the couple wanted a kitchen that would meet both their cooking requirements and design preferences.

"They had already chosen European-style Arclinea kitchen components, so the space needed to be sympathetic to these new elements. At the same time it still had to complement the home's Victorian architecture." 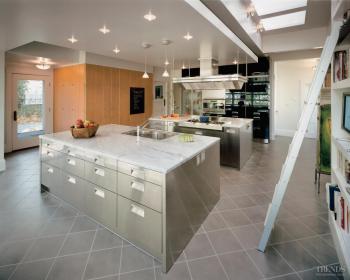 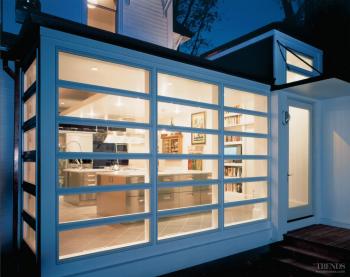 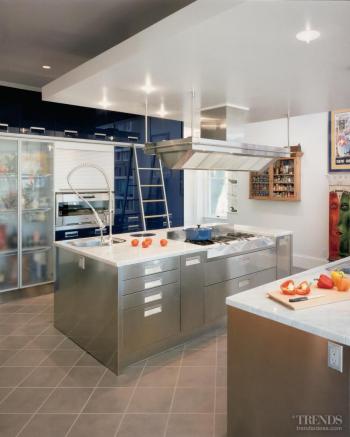 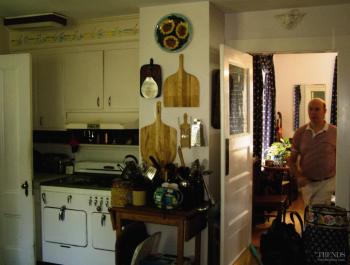 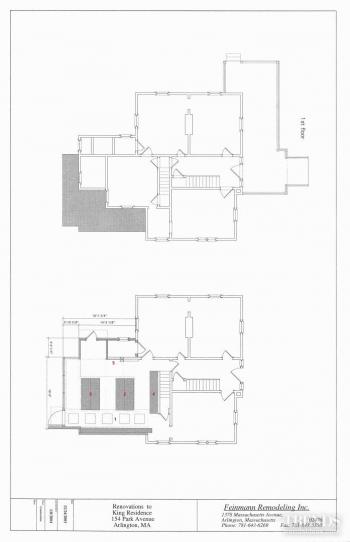 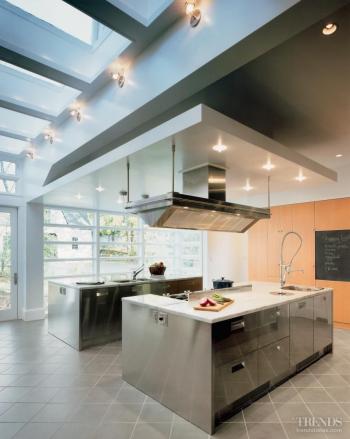 Maier says another challenge was to create a strong link to the garden where fresh herbs and produce are grown for use in the kitchen.

To cater to these requirements, the kitchen was enlarged by extending it to the rear. A wall of floor-to-ceiling glazing was incorporated.

"The window wall allows the new kitchen element to peek out of its Victorian surroundings," says Maier. "It also lets in plenty of light."

Additional natural light is provided by a row of skylights that define a passage to the garden.

Within the kitchen itself, two large islands provide plenty of work space, as well as additional storage. The islands are finished in stainless steel, which is contrasted by a bank of dark blue enamel cabinetry, and a side wall of timber cabinets. Maier says the wood helps to warm the kitchen visually, yet still conveys a sleek, streamlined look in keeping with the contemporary elements.

"The wood is rift-cut, with the striations appearing uniform from a distance. The detail reveals itself as you get closer."

A floating horizontal ceiling plane anchors the islands within the large space. As well as providing lighting for the work surfaces, the lowered ceiling supports a large, brushed stainless steel exhaust fan. It also helps reconcile the modernity of the new kitchen with the high, sloping ceilings of the Victorian house beyond, says Maier.