Traditional New England shingle-style homes dot the coastline along the Eastern Seaboard. The style has become especially synonymous with summer houses on Long Island and in the Martha's Vineyard region.

This new house, on Chappaquiddick Island, echoes the architectural vernacular, but the design team from MJ Berries – Jon Hattaway and Martin Potter – have put a very personal spin on the interior.

Hattaway says the two owners had different preferences that needed to be accommodated with the design, color and material palettes.

"He loves tradition, while she is an artist devoted to color and texture," he says. "They both had a lot of design involvement with the house, right from the start, including the architecture. The house, which was designed by Ahearn Architecture, has a very New England look when viewed from the water, but has a more European sensibility at the front.

"The home is large, with five light and airy bedroom suites that are almost like separate apartments, where the extended family can stay when they come to visit."

View all 23 images in the gallery 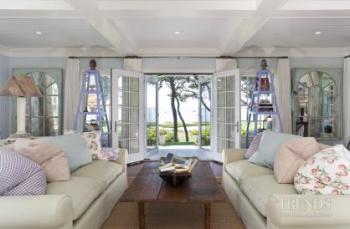 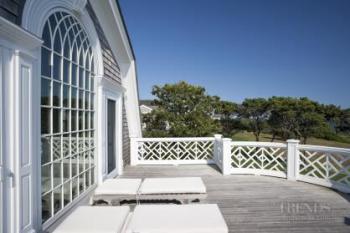 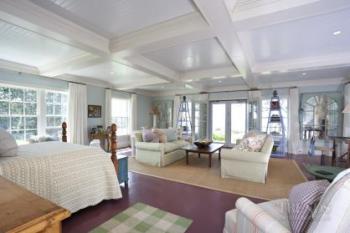 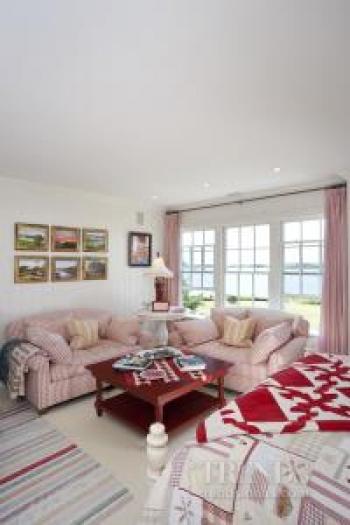 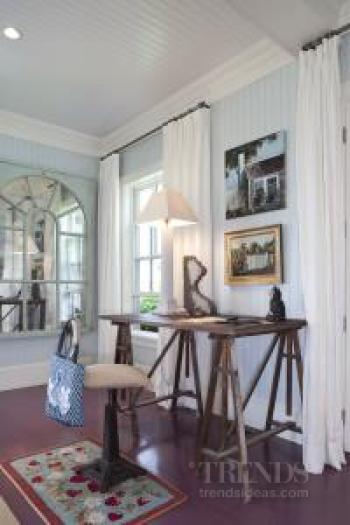 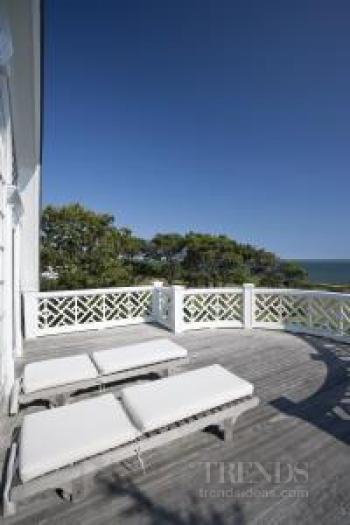 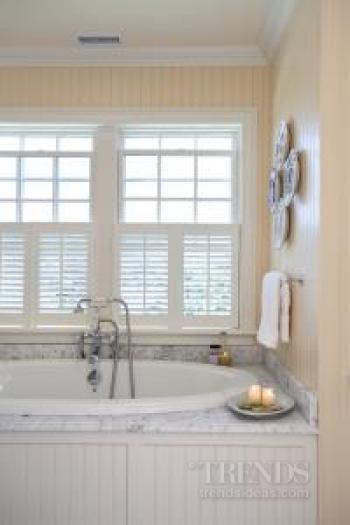 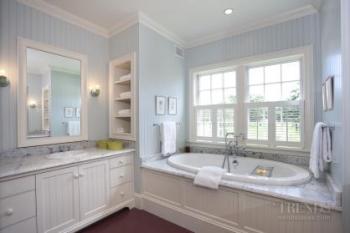 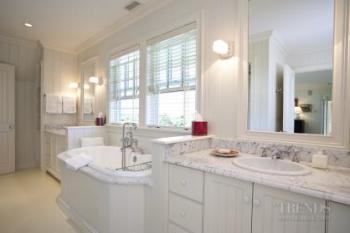 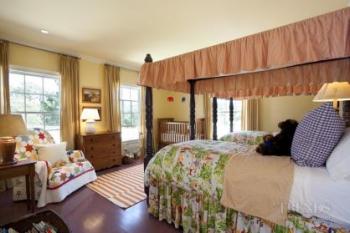 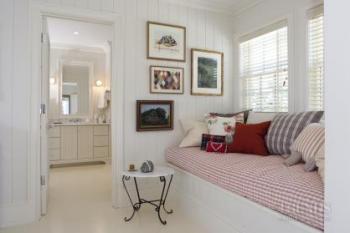 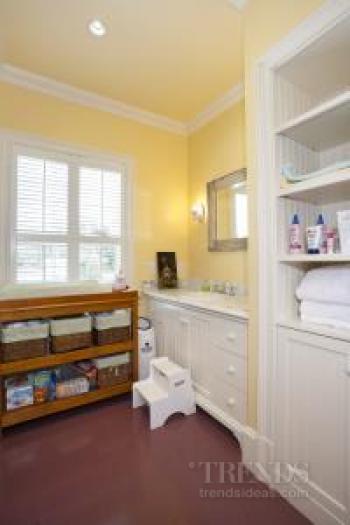 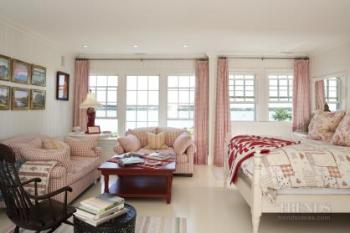 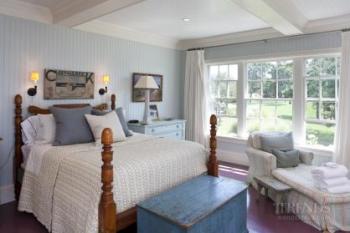 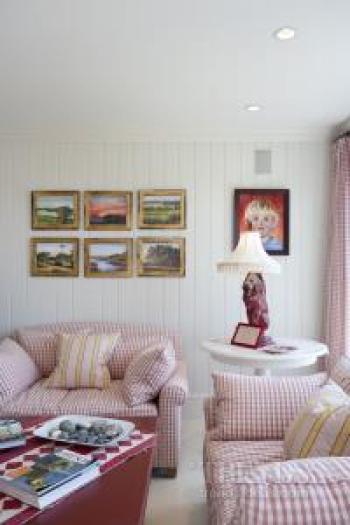 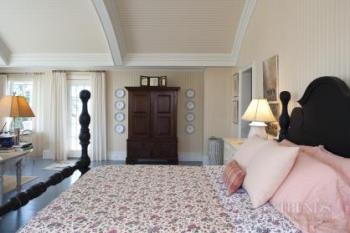 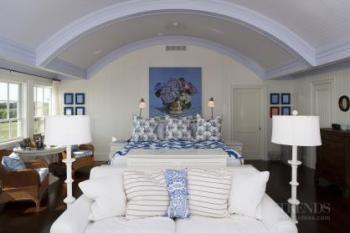 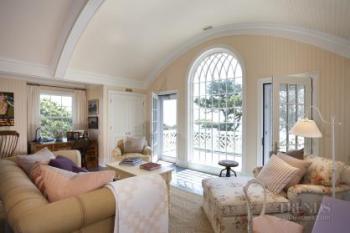 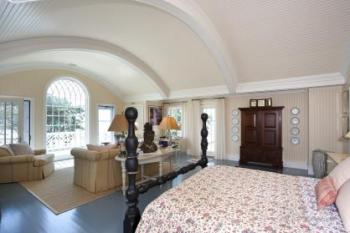 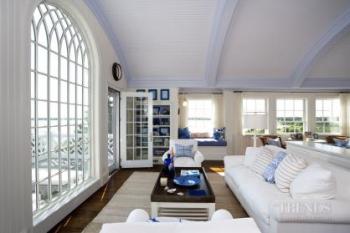 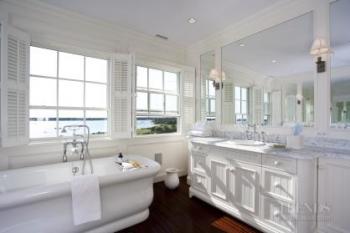 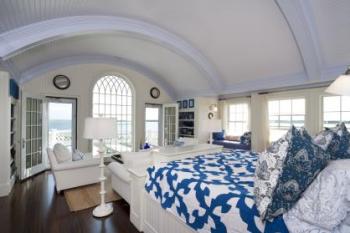 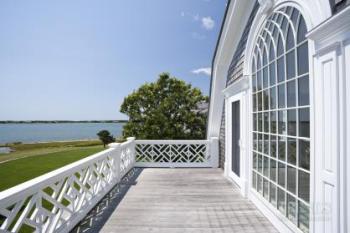 Hattaway says all the suites have space for seating areas and ensuite bathrooms, and are linked to an additional room that could be a children's bedroom. And they are all designed to maximize spectacular water views.

"This arrangement means there is a suite for the owners, and one for each of their children and families. Each suite needed to match the personalities and design preferences of the people who stay there."

The designer says the size of the bedrooms was a challenge – it was essential that furniture did not look lost in the space. Consequently, the team took a bold approach, opting for large, comfortable beds and sofas, area rugs and a mix of old and new furnishings.

One ground-floor suite features a warm raspberry-colored painted floor and light sky blue painted beadboard walls. This suite has French doors that open up to the water views. To expand the sense of this view, Hattaway and Potter positioned two large mirrors either side of the doors. These are made from vintage arched windows, which provides a visual link to the fenestration elsewhere in the house.

Soft white linen drapes with deep hems are found in many of the bedrooms.

"In the humidity, the linen rises and falls like the tide," says Hattaway. "This is simply what happens when you hang linen drapes just 30ft from the ocean – but it is all part of the look. The drapery metal hardware was chosen to resist the effects of the salt air. The rods have a very simple design, bordering on the industrial. It's a style used in 18th and 19th century houses in France, so it has a historical precedent."

For the suite shown on these pages, the team chose a red and white theme, with sheer cotton gingham drapes. The drapes are layered, and the lining is not attached at the bottom, which means the fabric billows in the breeze, enhancing a sense of romance and escape.

But the interior of this suite is more complex than can be seen at first glance.

"There are at least seven different shades of white in the room, and about the same number of different reds," says Hattaway. "If all the walls, ceilings, doors and floor were painted in the same white, the room would look very flat and two dimensional. It is the subtle play of tones that give it vitality – they bring it to life."

Throughout the house, color is present, yet restrained. Many of the fabrics have a faded quality, with brighter tones introduced through accessories, such as an antique blanket chest or side table. The owner's artworks enliven all the rooms, including the master suite, shown on these pages, which features a soft periwinkle blue painted barrel-vaulted ceiling. Hattaway says the owner also likes to bring a touch of black to a room, as a defining accent.

The master suite is the one bedroom that has a natural wood floor – Brazilian hardwood. Natural materials also appear in the brown bamboo side chairs, which feature woven sides and dark lashing.

"The median brown tones of the wood dictated the exact shade of the blue and green we needed to introduce," says the designer. "Everything in this room, from the blue-framed paintings – with one quirky red frame – to the vintage quilt on the bed, works together to unify the space and evoke the right feeling."

Hattaway's and Potter's love of furnishings even influenced the design of the terrace railing on the balcony outside. This mimics a Chinese Chippendale pattern.