With its solid, square-edged form, white walls and plantation-style interior, this house is reminiscent of tropical Caribbean resorts

Windswept coconut palms framing an azure sea bring to mind a picture postcard image of a tropical island resort. But creating such a picturesque setting for a new property usually won't happen overnight.

For the owners of this resort-style beach house in Queensland, Philip and Sandra Rerrie, the solution was to buy a property with established landscaping and extensively remodel the existing house.

Designer Philip Rerrie, who has spent much of his life in Jamaica and is a former principal of Archidiom Design, worked with the Archidiom design team to re-design the original house so it would better suit the family's needs.

"The site, which is on a headland, is quite magical," he says. "There are 180° views of the coast, the Coral Sea and Whitsunday Islands, all framed by established palms."

Rerrie says the house was less appealing, however. The tired, 1980s-style bungalow was comprised of lots of small rooms and was not well suited to a laid-back resort lifestyle. 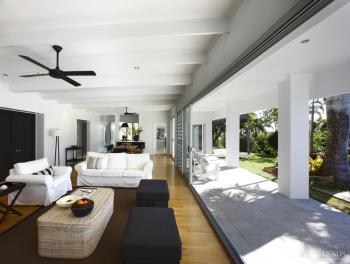 "Archidiom Design is known for its bold, contemporary architecture, but this project was always going to be a little different," he says. "Working with the existing structure, we set out to create the quintessential Caribbean house. Caribbean architecture is very relaxed and comfortable, and rooted in the past. We wanted the house to have the wide verandas, plantation shutters and tongue-and-groove panelling that convey that sense of history."

Rerrie says it was also essential to provide a spacious, airy interior that would be open to the outdoors and maximise the expansive views.

To meet this brief, the entire house was gutted and rebuilt within a solid, square-edged shell that features heavy structural columns.

In place of several small rooms, there is now one large central living area, which opens along its main axis to a deep covered terrace overlooking the landscaped swimming pool. Exposed, white-painted beams and tongue-and-groove ceilings enhance the laid-back Caribbean look. But Rerrie says the architecture also references traditional Queensland houses with their semi-enclosed verandas and louvre windows.

"The louvres, the ceiling treatment and the way the entire length of the living area is opened up to the outdoors makes the whole room seem like a veranda," he says. "The effect is compounded by the way the bedrooms open directly onto the living area – almost as though they are opening to a veranda. The cross ventilation makes the entire room a breezeway, yet the design also ensures there is protection from strong onshore winds when required."

Although the main living area is just one large space, there are several seating zones.

"Holiday homes are all about entertaining," says Rerrie. "The room needed to be able to seat several groups of people, but we didn't want them to feel disconnected from each other. Removing the interior walls to create one large space also means the views through the house are uninterrupted."

The seating areas include a day bed window seat in the kitchen, which is replicated by a similar day bed on the veranda, on the same horizontal axis.

"Again, we wanted people to be able to experience the views and the outdoor connection in different ways. These day beds command spectacular views of the sunsets," Rerrie says.

An additional living space is provided at the ocean end of the house. This can be opened up to the main area, or closed off by glass doors. It is also open to the master bedroom, effectively creating one large resort-style master suite.

The designer says the all-white interior was the best way to frame the vivid blue and green of the views – the interior is not a distraction. However, the design team did specify matt black-painted accents, including panelled doors and Casablanca-style ceiling fans, which add a contemporary twist.

"The black accents introduce an element of surprise," says Rerrie. "The traditional detailing is there, but the colour is unexpected. These surprise elements help lift it out of the ordinary."