Fitting snugly into its limited allotted space, this mainly black and white family kitchen – part of a bungalow extension – is also open to its wider surroundings

Kitchen designer Leonie von Sturmer began working with the homeowner in conjunction with the architect Peter Cresswell right from the outset on this bungalow renovation. The goal was to achieve a practical family kitchen without diluting the architect's vision for the extension.

"Because of the unusual and rather restricted space that had been allocated for the kitchen, it was important to deal with the intricate angles and measurements required," says von Sturmer.

One concern for the designer was that the kitchen was squeezed into the lowest point of the room, directly below an eyebrow window. This relatively tight space meant the cabinetry needed to be kept low.

"Also, with the dining area so close, it was a narrow space, so the width of the benchtops and space behind the island were both critical, too."

To connect the kitchen into the wider space, vertical battens were introduced on the island to match the wood columns that form the balustrade around the sunken lounge area. And, a Super White Granite benchtop was chosen to pick up the tones of the polished concrete floor. 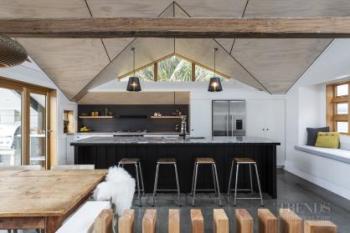 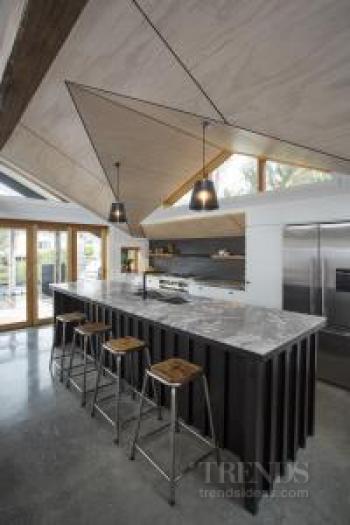 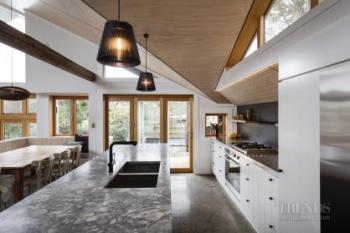 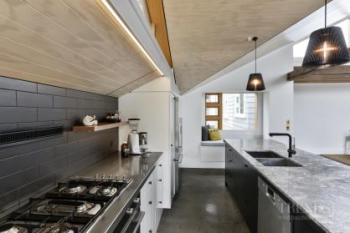 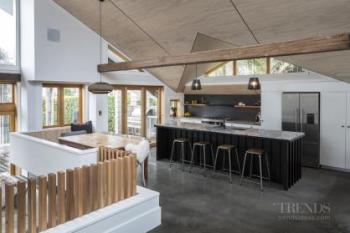 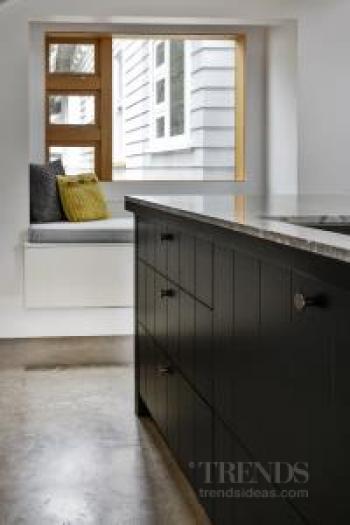 "We honed the top, so it is velvet to the touch," says von Sturmer.

Laying the thin slab on top of a timber base, also meant it didn't look too chunky.

Stainless steel was used for the perimeter benchtop, its more practical, utilitarian surface ideal for the harder working part of the kitchen. Matt black subway tiles were chosen for the splashback, to ground the back of the kitchen.

A wall-mounted extractor above the cooktop is painted in a matching matt black to blend in seamlessly.

"This is a practical solution – due to the height and space restriction along the back wall."

Cantilevered shelves, made from recycled Matai also used in the original part of the home, flank the extractor. A thin channel milled out of the underside of the shelves holds an LED strip for task lighting. A similar strip was added along the edge of the sculptural bulkhead.

The white cabinetry beneath features a shallow v-notch, as does the rear of the island, bulkhead and window seat – creating the sense of tongue-and-groove. This softens the look and ties the kitchen back to the original home.

However, it's the generous use of black that predominates in the design. Seen on the stained timber island and splashback, black also features on the tap, hardware and pendant lighting.

"The key to success with this modern-with-a-twist style kitchen was to keep it simple," says the designer. "Sticking to one or two colours, with only light detailing; honing the benchtop, to soften the look; and using traditional pulls on the drawers – with most finished in matt black.

"One other request from the owners was for a window seat looking across to the front of the house. I introduced this to the right of the kitchen, with storage underneath," says von Sturmer. "The owner loves it – it's now her favourite space in the house."