Call of the sea

Call of the sea Discover this article's resources 0

Any area can be enlarged by combining two rooms, but another option is to choose a palette of materials that creates a sense of spaciousness.

The owners of this home wanted to extend their bathroom to create a larger space that would accommodate two people, provide them with a spa-like experience, and have the same gracious proportions as the rest of the home.

Although the original bathroom was small, there was an adjacent closet, so designer Jamie Drake of Drake Design Associates suggested combining the two spaces into one.

"With remodelling, the bathroom is now large and luxurious, and its new layout and clean, minimal design and materials create an impression of spaciousness," says Drake.

The bathroom includes an oversized bathtub, and a double shower enclosure with two shower heads. 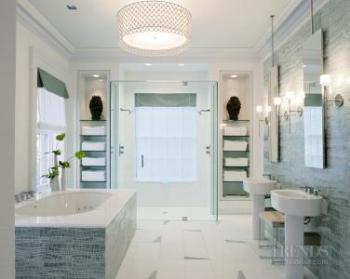 "As a dramatic architectural gesture, the two pedestal sinks are framed by a freestanding, backlit wall clad in Ming Green mosaic tiles that feature an undulating pattern reminiscent of an ocean wave. Frameless, highly polished, stainless steel mirrors behind the two basins appear to be suspended in space," says the designer.

"When all the other lights in the bathroom are extinguished, the backlit wall glows like a distant horizon."

Tiles on the floor also feature a wave pattern, but slightly altered to create a sliver design.

"This has produced a wonderful dialogue with the wall tiles, and emphasises the organic feeling of the bathroom," says the designer.

Between the two basins, a bench made from repurposed paper is branded with a literary quotation, adding a touch of individuality.

Drake says this bathroom was intentionally designed so it doesn't relate to other rooms in the house, but instead stands alone, creating a sanctuary for the owners.