Call of the sea

Sitting just above the high tide mark, this beach house was designed to weather the storms – and throw open its doors to summer

Call of the sea Discover this article's resources 0

Even a pocket-sized plot can be a slice of paradise when it's right on the sea front. And they don't get much closer than this house, which is just metres from the water.

But architect Steve Seddon says the location was both an inspiration and a challenge.

"Naturally, the owners wanted to maximise the great view and open up the house to the outdoors," he says. "But both the size of the site and the location meant the design and materials needed careful consideration. The house had to be able to withstand the effects of salt spray. And at high tide, in a storm, there was a danger of the waves throwing up a lot of water."

To help deflect the waves, Seddon designed a curved top to the solid sea wall fronting the property. A set of stairs within this wall are hinged so they can be lifted up to completely close off the gap.

The house itself is double glazed, and features weathered cedar cladding, which Seddon says is enhanced by the salty environment. Local stone, similar to the rocky coast, was used for a wall and seating area at the front of the house. 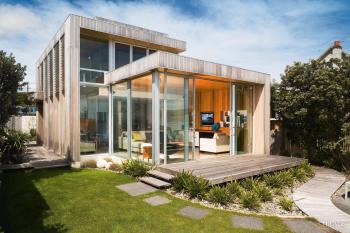 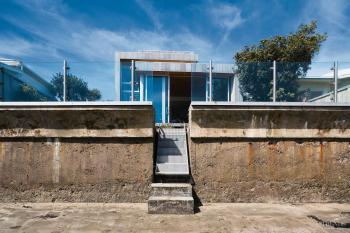 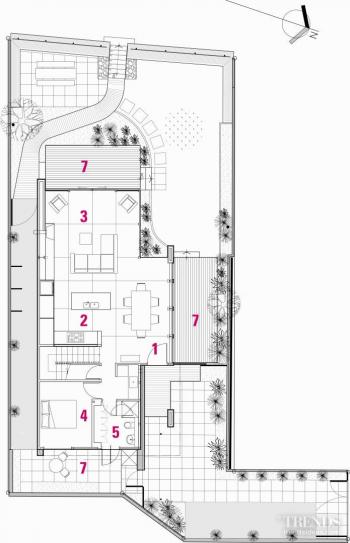 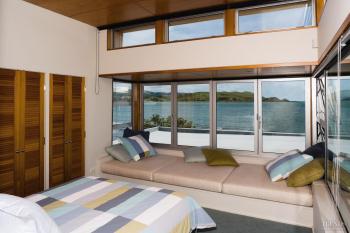 To maximise the small site without compromising the interior space, Seddon designed the house as two overlapping, inverted L-shaped volumes. From the front, one of the vertical supports appears to slice through a horizontal plane.

"There is a strong visual connection between the various intersecting forms," he says. "The two L shapes lean towards each other, yet don't appear to touch. This helps create a feeling of space and light."

It's a visual message that is repeated with the interior. Seddon says although the living area is open plan, and furnished to ensure the view through the house is not blocked, there was a need to define specific areas. Lining the L-shaped wall and ceiling in the living area with cedar not only creates a spatial distinction, it also creates a seamless link to the outdoors – the cedar walls extend through to the patio.

"In addition, bringing the outside materials in helps create the illusion of a larger space," says Seddon.

In the centre of the house, a wall of flush white cabinetry and a white ceiling form an L shape that wraps around the kitchen. This ceiling stops short of the opposite wall, leaving a double-height void above the dining area.

"The double height volume enhances the sense of space. And with the fully glazed walls, it also allows extra light into the living area," says Seddon.

Operable louvres ensure the owners can keep out the sun in summer, yet bring it in to warm the house in winter.

The glazed walls beside the dining table incorporate seamless sash windows, which can be raised to 2.1m, opening up the entire wall to a small barbecue area. As there are no doors, the outdoor living space is not compromised.

Creating a light spacious feel and providing clear lines of sight through the house also led to the installation of a glass panel above the kitchen splashback. This allows light into the stairwell, and, looking back the other way, provides a sea view from the stairs.

Space-saving design was also brought into play in the family bathroom. Although just 2.1m high, the room appears much larger, thanks to the position of the high windows and mirrors.

"It's a Frank Lloyd Wright trick," says Seddon. "If you lose the connection between the wall and the ceiling, you tend to increase the visual height of the room. With the windows and mirrors continuing to the ceiling, and the ceiling extending through to the eaves, you have the sense of a much larger space."