An upscale house may be built from substantial materials, along strong architectural lines, and still be subtle. Colour, finishes, furnishings, and even material flourishes can emphasise design lines, or allow them to recede.

This large house was created by architects Jung-Brannen in response to the clients' appreciation of the architecture of the great American architect Frank Lloyd Wright. In keeping with Lloyd Wright's trademark strong, organic feel, the interior was designed with extensive wooden detailing, within capacious, simple settings.

However, getting the right feel for a home can be an evolving process. Upon returning from a stay at the Four Seasons Hotel in Los Angeles, the owners asked interior designers Bierly-Drake Associates to rethink the new home's emphasis. Chris Drake oversaw the project.

"The owners were effusive about the famous hotel's interior, and we were asked to redirect the interior towards that look, which is the epitome of Californian decor – airy and light, with an emphasis on texture," says Drake. "Addressing the extensive woodwork played an important part in the fit-out. Leaving the details in natural wood would have created a dark, masculine decor."

Drake's response was to retain the intricate detailing of the original interior, but paint it white. This preserved the delicacy of the fretwork and at the same time avoided a heavier, wood look. 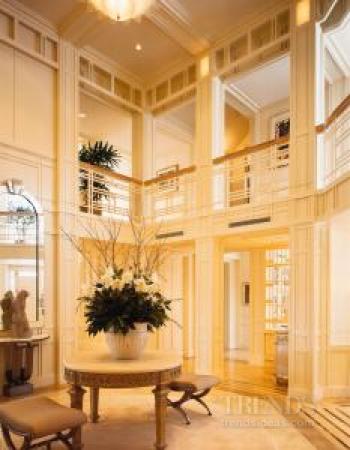 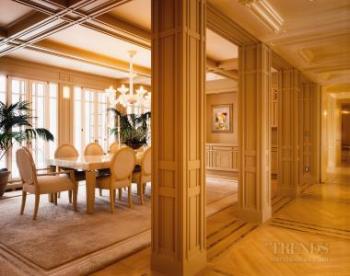 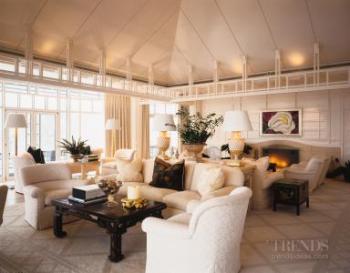 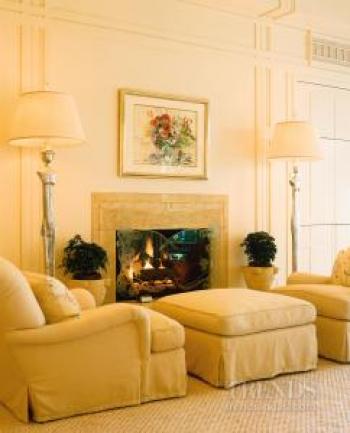 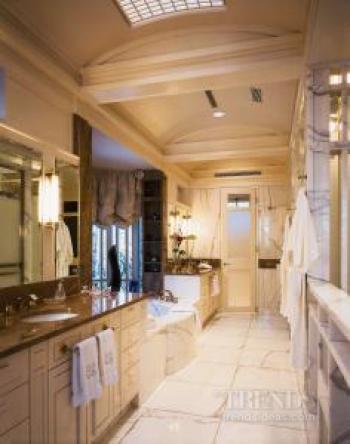 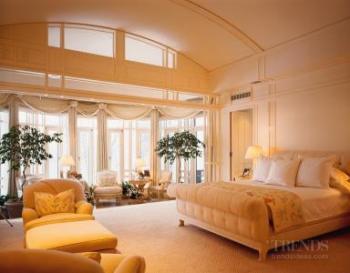 "To follow the light, white Californian feel, the entire interior of the home is painted in a soft cream," says Drake. "In a sense, painting the intricate woodwork to blend with other surfaces gave it almost a textural appeal, again in keeping with the Californian style."

The interior's ivory tones provide a suitable backdrop for an array of subtle and exotic textures that further the Californian-style decor.

The furniture itself is in similar cream tones. Material treatments range from ivory-coloured Chanel fabrics through to Thai silk. The formal drapery is in a combination of Italian damask and Chinese antique velvet.

A Californian style of interior is also signalled by exotic Eastern touches, such as black lacquered pieces, inset with gold leaf.

Texture, intricacy of finish and ivory tones run throughout the house. In the dining area, an antique Venetian glass chandelier hangs over a bleached satin wood dining table, with silver leaf inlay. The dining chairs are upholstered in an ivory-hued leather.

Away from the custom wool and silk Stark carpet which adorns the living room floor, much of the ground floor is finished in French limestone – another Californian influence. This is inset with a brown Emerador marble, for added visual interest. The strips of marble inlay also echo the shapes of the detailing on adjacent pillars. Bleached maple flooring sits alongside the limestone.

Upstairs, the pre-eminence of luxurious materials and textures is continued in the master bedroom. The bed itself, with scrolled headboard and feet, was designed by Syrie Maugham, the wife of author Somerset Maugham. An ivory-toned ottoman is covered in a Ralph Lauren cashmere fabric – fashion fabric reinvented here as upholstery.

Elliptical woodwork provides a defining element between the master bedroom and the sun room. This subtle curved element is repeated in various areas, including the living room and bathroom.

Finished in marble, with a palette of white, grey and silver, the bathroom has a steam room, sauna and spa bath, and has the feel of a health spa.

"The owners regularly entertain and hold charity events in the home," says Drake. "Even with the fine materials and finishes running throughout, this house is built to be lived in."