This two-pavilion residence takes design cues from the relaxed, open-plan houses built in the 1950s in the desert town of Palm Springs

When designing a house centred around a courtyard, there are many precedents to draw on. One is Desert Modernism, an architectural style that emerged in and around towns such as Palm Springs, California in the 1940s and ‘50s. Typified by glass walls, extended eaves and outdoor living spaces or courtyards, the style is well suited to any temperate environment.

The architect of this house, Matt Brew, and the owner had visited Palm Springs and the Coachella Valley, and were familiar with the region's Mid-century Modernist houses set in dramatic desert surroundings.

"The owner had bought property in a rustic setting and we wanted to create a low-slung home that nestled into the landscape," says Brew. "As it was a wide, open site and we shared a passion for the mid-century houses of Palm Springs, this seemed an appropriate starting point for the design process."

The initial concept was to arrange the house around two courtyards – one the entry vehicle court and the other a sheltered living court between the living and bedroom pavilions, with the garage and a linking glass-walled corridor forming an H shape when seen from above. There is also a studio or guest house, set away from the main living pavilion and separated by a raised section of lawn.

"As there is plenty of room on the site, the building forms have all been teased away from each other, allowing a series of axes and gaps to develop between the spaces," says Brew. "These gaps are internal and external, blurring the boundaries between indoors and out – allowing the landscape to permeate the residence." 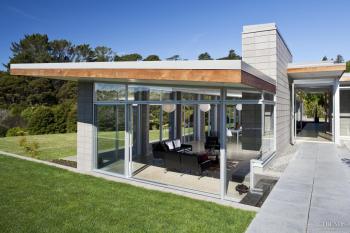 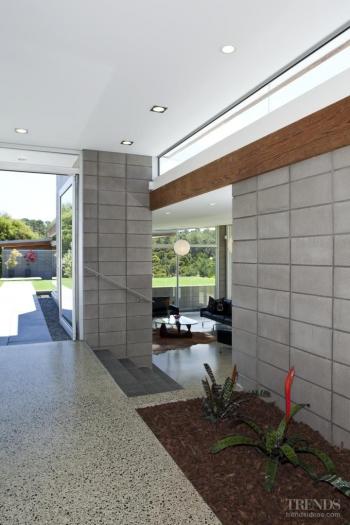 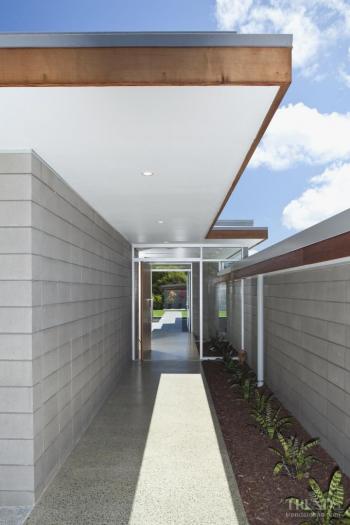 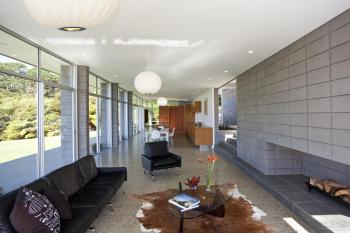 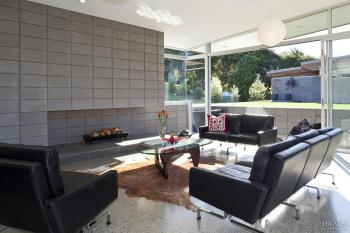 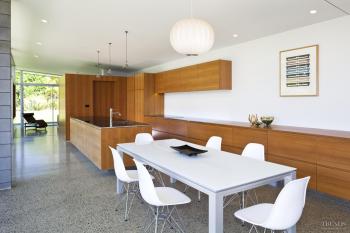 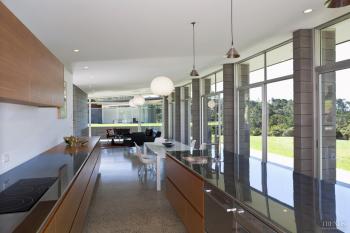 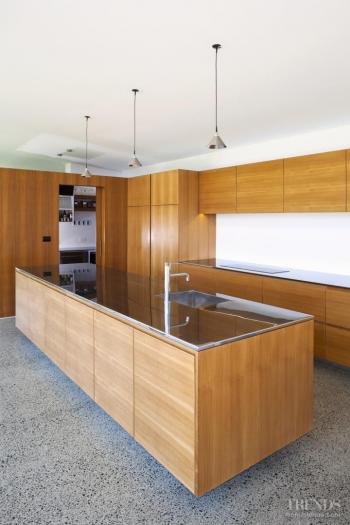 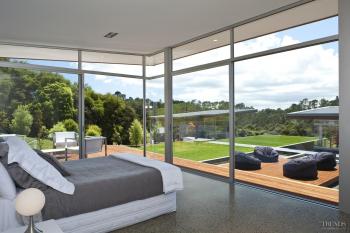 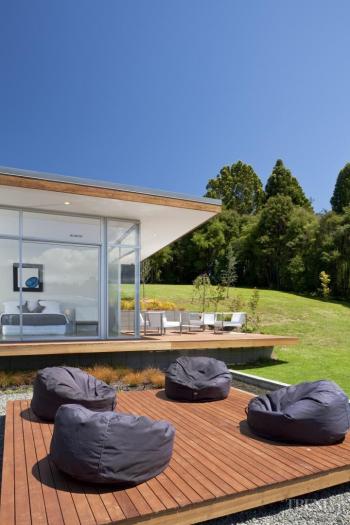 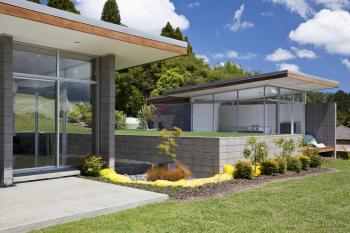 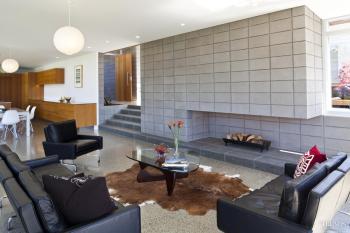 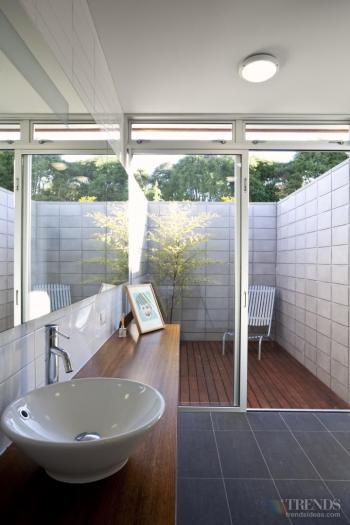 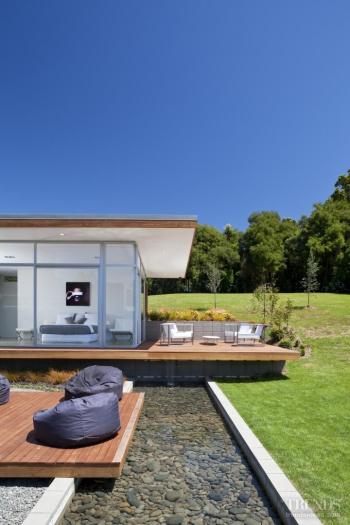 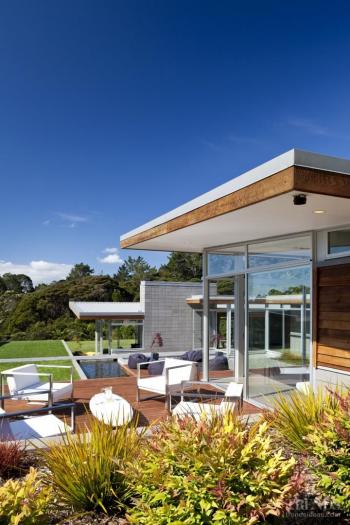 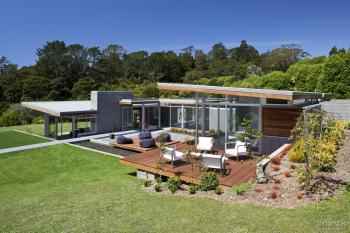 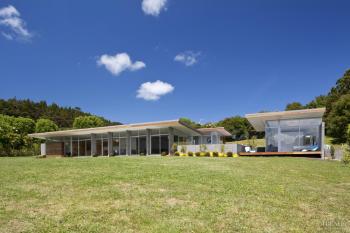 Mono-pitched roof forms accentuate the horizontal nature of the building forms in relation to the landscape. The large overhangs have the added advantage of providing good passive heating and cooling by shading out the summer sun, while admitting sunlight and warmth in the winter.

"In addition, the house has a concrete base construction, a design which allows the concrete to store heat from the sun during the day and release it slowly into the interior during the night. The design seems to work so well that the in-floor heating is very seldom turned on," the architect says.

The home's most dramatic characteristic, however, is its deconstructed feel. Concrete wall elements that provide privacy and anchor the house visually are interspersed with extensive walls of floor-to-ceiling glazing.

"The idea in a design like this is that you read the solid elements rather than the glass, giving the effect of floating roof forms cantilevering out from the solid walls," Brew says. "The glass opens the house up aesthetically, and appears at less expected junctures – connecting roof forms where the pavilions meet the garage, at corners of the living areas and linking corridors."

In the bedroom wing, open-air, private courtyards bring light and fresh air into the two bathrooms, in an interior that interweaves with the environment at every turn.

The natural world enters the residence in material form, too. To offset the broad expanses of concrete and glass, rich cedar weatherboard infills were introduced as floating counterpoints. The warmth of wood also features on the fascia that runs around both pavilions and the guest house and on the timber decking outside.

In terms of day-to-day use, the house is equally well considered. The open-plan living area runs almost the length of the living pavilion, with a television room set behind a sliding door at the far end. This placement minimises disturbance to those at the other end of the pavilion or using the kitchen in between.

The kitchen is also open plan, but has a walled-off scullery to shield clutter from view of the greater space. This work area was detailed by the owner and is finished in teak veneer.

Across the courtyard, the bedroom pavilion comprises the master suite, two more bedrooms and bathrooms. Both bathrooms have attached courtyards recessed into the slope of the site.

"Extended sightlines through the house add to the impression of openness in the main living pavilion," says Brew. "Entering the front door you can look right through the interior. There are similar views to the bedroom pavilion, and along the glass-walled corridor linking the two bodies of the home."

These long viewing axes also provide ideal gallery spaces for the owners' art collection, with works hung on the side walls, or at the end of the corridors for optimum dramatic effect.

Desert Modernist houses were also typified by an abundance of stone boulders and other natural elements dotted around the sites – water features were another frequent inclusion.

"Large boulders are still to come to this site, but a water feature runs by the master bedroom, alongside the central deck and down and around the living pavilion," says Brew. "Its sound adds to the sense of tranquillity in this quiet rural setting."

At the rear, the pavilions are dug into the hillside, and with a multitude of native plantings slowly coming into their own, the house will soon be fully immersed in its surroundings.