Historically the kitchen was an isolated work area, with little consideration given to its relationship with the home. Today, kitchens are far more likely to be located centrally, as part of an open-plan design.

However, with the right design you can still capture the ambiance of a bygone era, while reflecting the values and lifestyles of modern living.

This kitchen replaced a tired, 1970's design, which the homeowners found dysfunctional. And although the architecture of home is best described as Mediterranean, the new kitchen has a more Parisian Bistro influence, says designer Lisa Steinbach–Schecter of Kitchens on Montana.

"The original kitchen was dark, with just one window above where the range now stands" she says. "The clients called for greater use of natural light, and visual access to the garden and canyon views beyond."

As a start, three new windows were installed, allowing light to flood into the space. 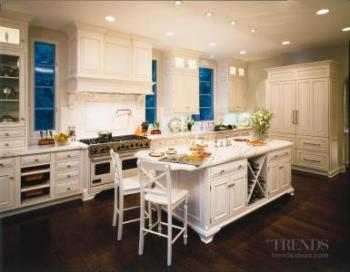 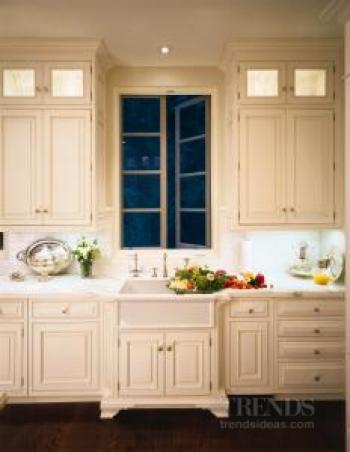 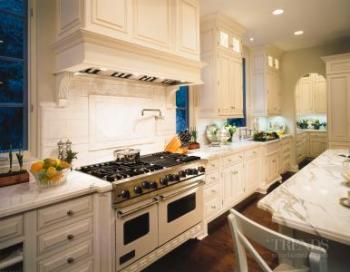 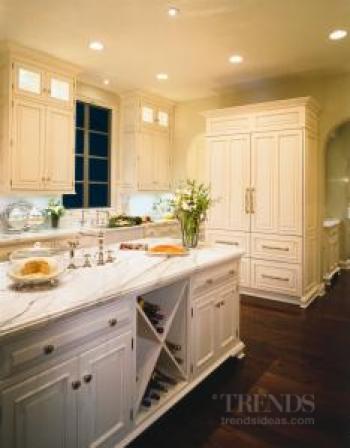 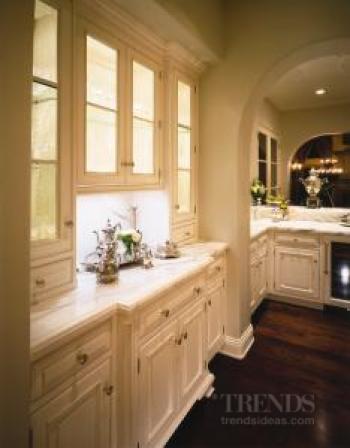 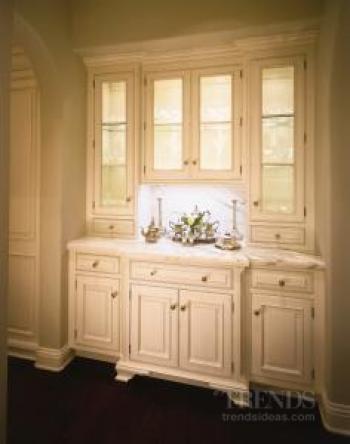 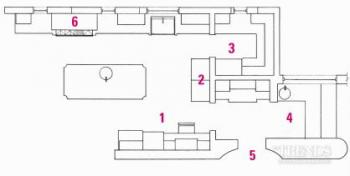 A warm, bright inviting ambiance was then created by installing cabinetry with a base palette of white, anchored by a stained chocolate, tongue-and-groove, oak floor.

"Color consistency was maintained by painting the walls egg-shell oyster gray, and the ceiling a Swiss, coffee-white. The look was completed by introducing a biscuit-colored Viking range," says the designer.

Ornate chamfers, featuring reeded corbels, flank the range, and have been repeated on either side of the farm-style sink. These give the design a touch of luxury and extravagant flair.

Cabinets on either side of the sink hide a dishwasher and a trash compactor, respectively.

These two islands were replaced with one, large central island, which now provides a gathering point for guests and family to chat while their hosts prepare dinner. The island accommodates a wine rack and a preparation sink. Recycling bins are concealed below, within the cabinetry.

The kitchen was also extended into a former den area, to include a substantial wet bar. This bar area is balanced by a butler's pantry to the left of the armoire at the end of the island.

"Part of the design inspiration takes its cue from the homeowner's collection of Baccarat and Lalique crystal, and antique silverware, which needed to be prominently displayed," says the designer.

A 10ft-high ceiling allowed for double-height cabinetry, where the silver and crystal is displayed. Ambient lighting illuminates the crystal, creating a dazzling effect.

"You should feel content in a kitchen," says Steinbach-Schecter. "And there is an exuberant quality to this design, which encourages lingering and contemplation."