Billionaire Warren Buffett, the so-called Oracle ofOmaha, once noted that in the business world, the rear-view mirror is always clearer than the windshield. A neat epigram – and no doubt applicable to myriad fields of endeavour – that recognises the value of education, research, and respect for history.

The latest portal for the development of business knowledge in New Zealand is at The University of Auckland Business School. The Owen G Glenn Building, named for the donor who contributed $7.5m to the development, is an environment for the analysis of past commercial success but, in terms of design, it is positively futuristic.

Like many significant modern structures, the building's design was the result of architectural collaboration, in this instance between FJMT and Archimedia. This association of Australian and New Zealand firms was successful in winning the limited competition the University of Auckland conducted in 2001. Archimedia's Lindsay Mackie credits the detail of the brief as being the first step towards a design that should become emblematic of the school.

"An objective of the brief was to increase the profile of the school from a leading Australasian institution into a world-class centre, excelling in the disciplines of business and economics," says Mackie. "The building's ribbons of curved class, breathable facades and highly visible spaces are symbols for a style of business that's transparent, dynamic and responsive."

Prior to construction, anyone viewing the site, which descends steeply into a gully with a motorway extension at its heart, might have called it challenging. 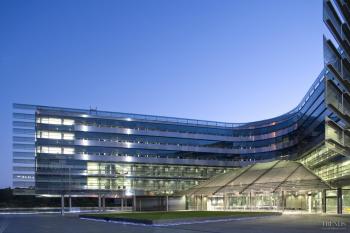 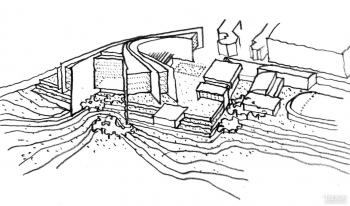 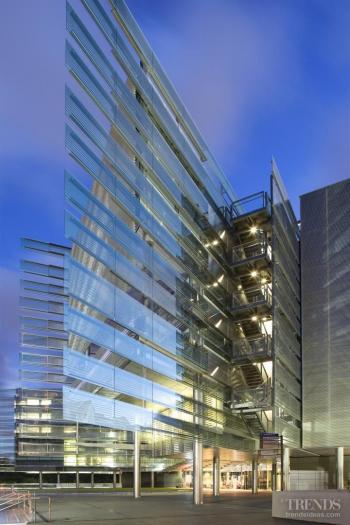 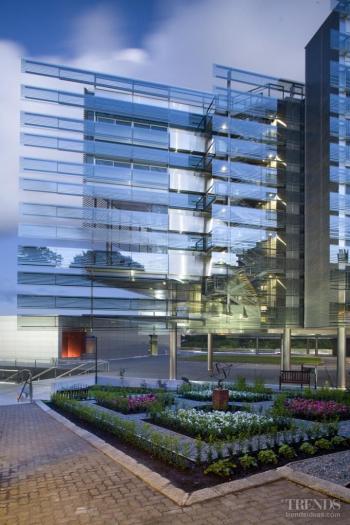 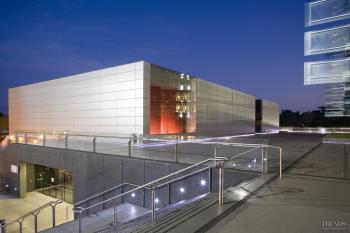 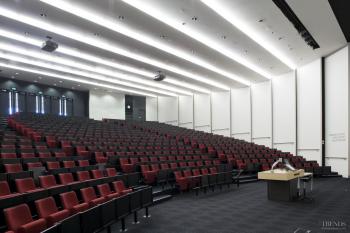 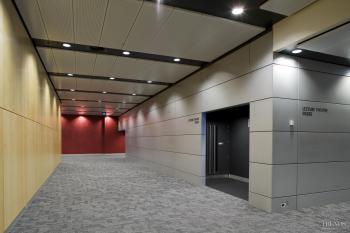 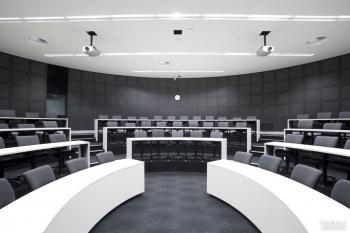 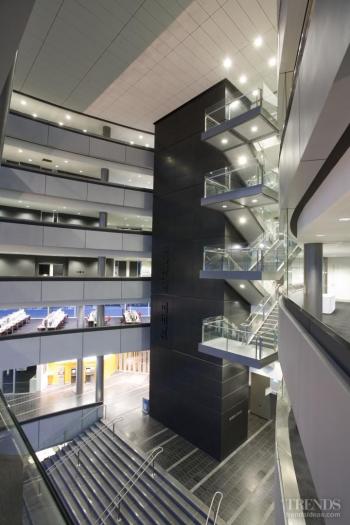 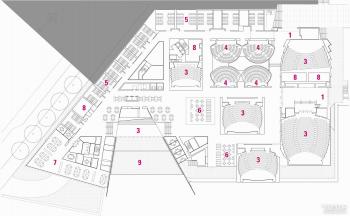 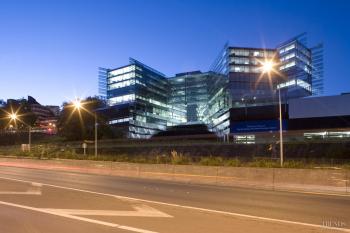 Richard Francis-Jones, design partner at FJMT, was undaunted by the topography. Deeming it ‘significant', he explains that sites such as this encourage unique creative responses.

"I was struck by the potential of the site, and the relationship a building could have with the topography, the natural landscape and the harbour. The building is designed to form a natural termination to the campus in a sequence of open spaces and sculptural form. A form that opens and connects with the harbour and the landscape of the domain, creating interconnections with the interior life of the building and the collaborative culture of the business school that thrives on informal exchange and connectivity," says Francis-Jones.

"The design of the school is closely related to the presence of the natural landscape and topography of Auckland, and is also a complement and acontrast to the traditional campus of the University. The fluid and open expression provides a strong contemporary counterpoint to the traditional insular European buildings that characterised the beginnings of the university."

As his concept sketch shows, the business school is a multi-layered affair. The upper structure is a sinuous form, wrapped in a facade of curvilinear glass ribbons, and orientated to connect with other university buildings, and city landmarks such as the Domain and Rangitoto Island. Built around an impressive atrium, this structure's arms contain cellular and open-plan offices, meeting rooms, classrooms, boardrooms, computer labs and study areas.

"The podium is connected back into the urban fabric of the university," says Francis-Jones. "Hovering above is the series of free-form organic ribbons that encase the upper structure. These create a sense of embrace to the public domain. The ribbons add to the sculptural form, helping to bring an edge-like quality to the site."

"We have created a series of glass ribbons with a metallic texture and layering achieved through inserted bands of titanium between the glazed panels. This was an innovative process, and involved Thermosash creating a full-size prototype," says Christine Kwong, associate at FJMT.

"The layered facade preserves the view but reduces sky glare, and ensures that natural light is filtered and controlled. These ribbons enhance the experience of the building from the exterior, softening and dematerialising the mass to give a transparent and dynamic quality," she says.

Themes of transparency and interconnectedness also run throughout the interior.

"The bridges that connect the two arms of the building across the atrium are social hubs," says Francis-Jones.

"They occupy a privileged position, orientated towards the relaxing and tranquil views of the Auckland Domain and its gardens. The sense of being suspended is analogous to a suspension in work, and the time found between classes. They are also in very visible positions, easily seen from the circulation areas. In this way an emphasis and significance is placed on the informal exchange of ideas between the academics and the students, collaboration and collegiality."

The shape of the upper structure, says Mackie, is also designed to provide optimum habitable space around the perimeter. In fact, in the upper office areas, there is virtually no occupied space that is more than 7.5m from natural light. Continuing the theme of proximity, in this case to lecturing staff, Level 0's theatres and auditorium were designed on a curve, so that despite their size there is a high level of intimacy.

The public spaces include the plaza, where the combination of hard paved areas, lawn and landscaped gardens also forms a forecourt for the ceremonial entrance, a spill-out space for restaurants and cafés, and a space for events. The plaza's central lawn is raised to the height of a comfortable seat, helping to ensure pedestrians use the main pathways, and don't track across the grass to the entrance. The main foyer is an equally important public space, creating a sense of arrival and orientation. Accommodating a café and informal seating, this area's glass ceiling rises under a sloping metal-louvre roof, forming a canopy that draws natural light into the central areas.

"It's the building's connectedness that expresses the business school's aspirations – layers of meaning, the environmental agenda, reference to the landscape, and the organisation of spaces integrated both horizontally and vertically," says Mackie.