Throughout America, as European explorers and settlers encountered the native population, they impacted on every aspect of the indigenous way of life. Over time, the resulting fusion of native and colonial aesthetics created artistic expressions that became the hallmark of specific regions. In the Southwest, Spanish missionaries had a profound influence on native architecture, and this was the genesis of two unique architectural styles: Spanish Colonial and Mission.

For Carolyn Claiborne, the Spanish Colonial style has long been a passion. Even before she began her career in interior design, her travels to Mexico and Europe fueled her vision of the home she would one day design and live in.

"It has always been my dream to build a house like this," she says. "I've been traveling to Mexico for over 40 years, and throughout that time this house was taking shape in my mind. When the time came to build it, all I needed was an architect to take my ideas and sketches and turn them into proper building plans."

Michael G Imber, a regional architect specializing in historically sensitive designs, helped Claiborne translate her vision. She came prepared with detailed lists of the assorted elements she had acquired during her travels, or designed herself. The trove included antiques, items salvaged from demolished buildings, carved stone and wrought iron accent pieces.

Claiborne says, "Because I had the dimensions of every item, and I knew precisely where I wanted to put every piece, it only took us about three or four meetings. I told Michael that this was my dream home, and I needed him to help me create the envelope. I knew exactly what I'd do inside." 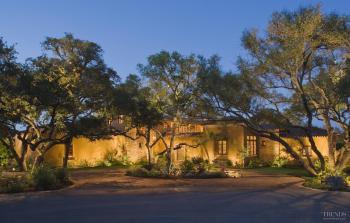 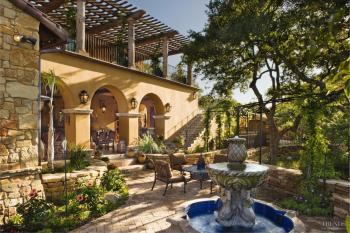 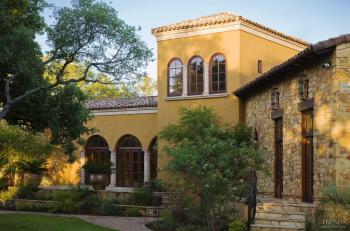 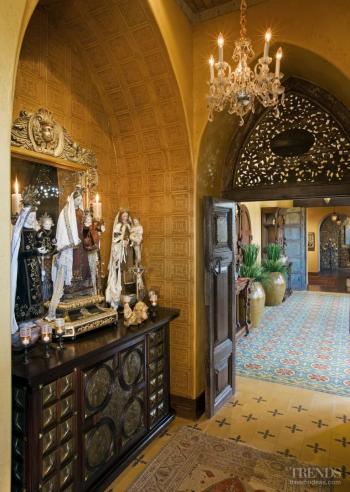 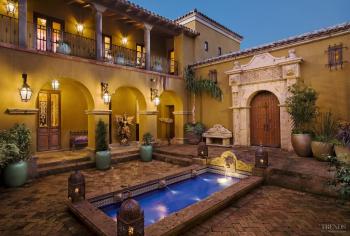 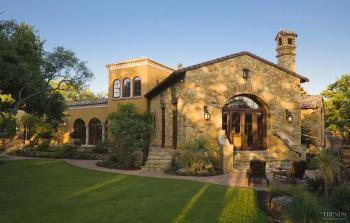 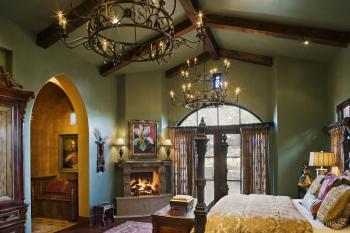 Most exterior walls are stucco, but local Texas limestone is used as an accent on some volumes and faces. The carved elements are chiseled cantera stone, a material that is unique to Mexico and the Southwest. Cantera stone is a sedimentary stone, formed from volcanic ash and dust, compressed over thousands of years. Durable, but malleable, the stone absorbs both heat and moisture without expanding or contracting. These qualities make it an especially appropriate material in the American Southwest, which while mostly hot and dry, can be inundated by heavy rains. Traditional red clay barrel tiles on the roof add to the faithfully composed exterior.

The large home is situated around a central courtyard, as is typical of Spanish Colonial style. The traditional heavy wood doors are rounded at the top and feature wrought iron hardware and detailing. The main entrance is accented by an ornate stone archway, which was carved in Mexico to Claiborne's specifications.

Underfoot, handmade Saltillo bricks, laid in a herringbone pattern, feature in all the exterior spaces. Open loggias surround the courtyard on both the ground and upper levels. Claiborne says this engaging outdoor space is ideally suited to entertaining on a large scale. The pool in the middle of the courtyard features painted ceramic tiles and lion's head spouts. It is reminiscent of the central fountains typically found in Mexican villages.

The four sets of glass-paned doors leading into the main living areas were salvaged from a old luxury hotel in southern Mexico City, which was going to be demolished. Inside, arched openings and walls of painted plaster or natural stone are accented by hardwood floors and colorful rugs. Ceiling beams are exposed. The rooms are situated around the central courtyard, and full-length doors in many rooms create a smooth transition between inside and out. Mexican and European folk art, including textiles, pottery, statues and metalwork, is displayed in every room.

Claiborne is a collector of noted contemporary artist Patricia Nix, and examples of her work are seen throughout the interior.

"I've collected Patricia's work for years," says Claiborne. "Many of her paintings are influenced by the culture of Texas and Mexico and the Spanish Colonial history of the region, so this house is a perfect setting for them."

Claiborne's commitment to authentic materials and methods extended to every aspect of construction. A number of artisans from the San Miguel area of Mexico were involved in this project, including stone masons, plasterers and iron workers.

Claiborne commissioned fittings, such as the lighting fixtures, on her travels and shipped them back to the United States. Antiques and objects purchased in Europe – especially Spain and Portugal – also figure in the home.

The house includes four bedrooms and bathrooms, plus a powder room. And alongside the old-world detailing is modern convenience. The kitchen features the latest appliances by Wolf, Sub-Zero and Miele. Wrought iron fixtures are supplemented with recessed ceiling lights, all controlled by a Lutron system. The entertainment system includes indoor and outdoor speakers.

Despite the size of the house, and Claiborne's commitment to authentic methods of construction, the project took less than 18 months to complete. Claiborne attributes this to the years she spent planning and acquiring materials.

"We had a fantastic team of people working on this house, and that helped speed things along," she says. "But the reality is, although the house is just two years old, in my mind I've been living in this home for over 20 years."