A lighter aesthetic comes to a master suite that suffered from earlier, heavy-handed refits

Relaxation and privacy are what most of us look for in a master suite these days, so it's no surprise to find designers are creating spaces that are light and soothing – not ostentatious and overbearing.

This master suite has been reinvented by architect Jim Fraerman, interior designer Anne Kaplan and kitchen-bathroom designer Mick De Giulio. The project was to follow the same concept as the whole-house remodel – with all work undertaken at the same time.

Built in the ‘70s, the house has good bones that had been obscured by a series of excessive refits in the following decade. These of-the-time rethinks had disrupted the natural grace of the rooms, says Fraerman.

"Treatments in the master bathroom were typical of this approach – the skylight was obscured by oppressive, tiered ceiling elements and the original cabinetry had been replaced by a vanity with chunky, pillowed facades," says the architect. "An introduced bathing pedestal had made stepping up to the oversized tub or cramped shower slippery and dangerous."

This clutter has been stripped out to create an architectural space in tune with the house. 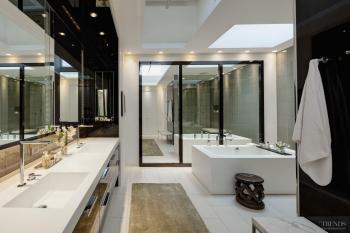 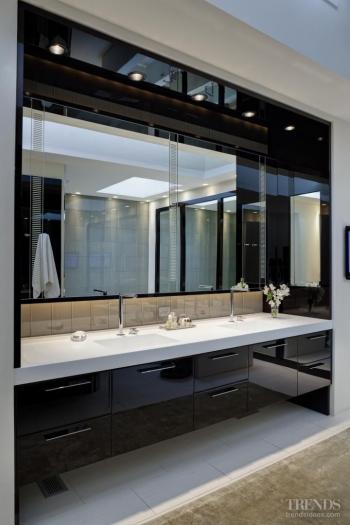 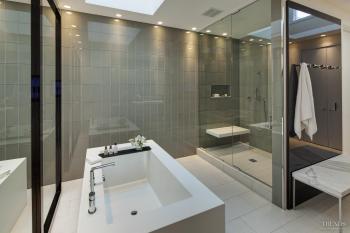 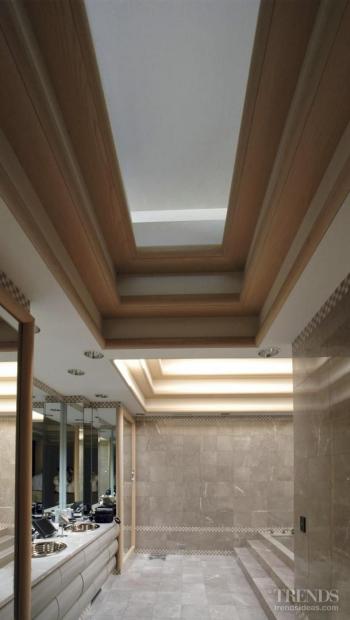 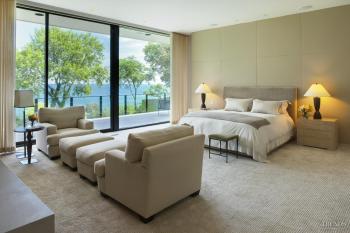 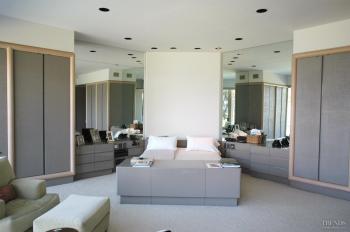 The heavy ceiling was replaced by a crisp, white plane that has a void above the new tub and a second cutout that leads the eye down the room. These admit light from a skylight covered over by the earlier refits. The sides of the voids slope backwards, accentuating a floating effect.

In addition, the bath-shower pedestal was removed – replaced with the dramatic, angular white tub and a more spacious shower stall.

Designer Anne Kaplan says the white walls are in Venetian plaster, a texture which introduces a refined, personal ambience to the room.

"We selected tilework in tones that worked with the decor of the house. A silk rug on the floor adds texture and warmth – it also has a shimmery look reminiscent of water."

With the Fraerman-designed vanity niche having white cabinetry faces, the desired effect of lightness was achieved. At this point, the owners decided some contrast was needed. They asked bathroom designer Mick De Giulio to add some dark elements that wouldn't detract from the overall look.

"I refronted the vanity in polished ebonized walnut – toning in with the dark aluminum window frames seen throughout the home. A wall-sized mirror, also framed in walnut, gives a sense of space and a reflected glimpse of the shower from the entry. I also added a wall panel in the same wood by the door," De Giulio says.

The master bedroom was also reinvented by Fraerman and Kaplan. Again, outdated elements were removed and the space was realigned to create a modern master bedroom and study, joined by a pivot door. The refit makes the most of the bedroom's volume and views.