There's a good reason why developers opt for neutral palettes – they don't want to scare prospective purchasers with a bold design statement.

"It was best described as a beige drywall box," he says. "This did not suit my client, a company with a strong design focus, who wanted a crisp, contemporary interior."

Stringer says the condo was to be used in a number of ways – as a guest apartment for visiting clients, a corporate retreat for meetings, and for entertaining purposes.

"Design flexibility was essential. The remodel also had to be cost effective, without sacrificing good design." 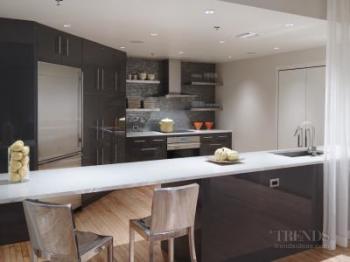 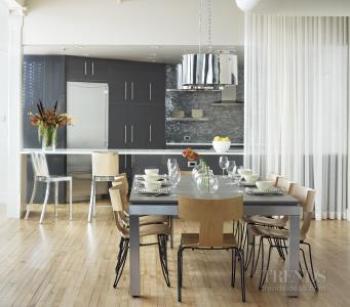 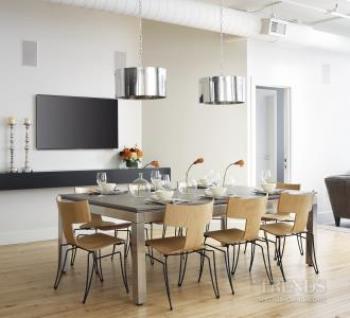 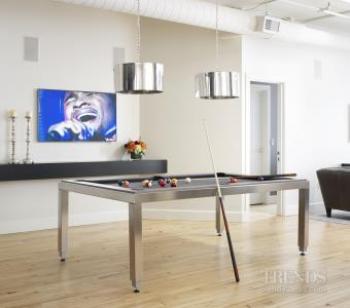 With this in mind, Stringer suggested contemporary Ikea cabinetry in a glossy grey.

"Almost everything we do in our design company is bespoke, so this was a little off-the-wall for us," he says. "But even though the client is very design driven, and has a collection of classic Mid-century furniture pieces, the kitchen itself was not about provenance. I admired the lines of this Ikea cabinetry and the surface gloss was just right."

The designer teamed the cabinets with white quartz and recycled glass benchtops, and smoky metallic mirror glass tiles on the splashback, which have an iridescent quality. Polished stainless steel shelves reinforce the look.

Stringer also introduced a much longer island, anchored at one end to a structural column. The other end of the island forms a bar, where a bartender can serve drinks without interrupting the main work zone.

"The client wanted to be able to screen off the kitchen, without completely hiding the activity, so we added a long, sheer drape that can be pulled across the front of the island. You can still see movement through the drape, but it is muted – meal preparation is like a ballet in the kitchen."

Stringer says there had been a pool table in the condo when the client took ownership. This proved to be popular with clients and staff.

"We chose to keep this option, by specifying a dining table that can be converted into a pool table. The legs have gas struts, so they can be raised and lowered easily.

"The table also functions as a conference table – video-conferencing equipment is stored in the floating console below the television."

Despite the changes, the character of the building remains intact. The high ceilings and original windows were retained, as was the maple flooring. This was refinished, with a light grey tone replacing the yellowed varnish.