Better than new Perkins + Will office

Refurbished office building by Perkins + Will

Better than new Perkins + Will office Discover this article's resources 0

Refurbishing rather than demolishing an existing building is usually the most sustainable option, but it does require imagination. Fortunately, that's not in short supply when it's an architects' own office on the drawing board.

This remodelled office building at 1315 Peachtree Street, Atlanta is home to leading design firm Perkins + Will, along with other tenants, including the Museum of Design Atlanta (MODA) and a public library.

Architects Manuel Cadrecha, Bruce McEvoy and Paula Vaughan say the remodelling has extensively altered the look and functionality of the building, with many locals assuming it is in fact new.

"The building initially captured our attention because it was in a great location, close to public transport and just a block and a half from our former offices," says Cadrecha. "Although it was a very recognisable building, it had fallen on hard times and was in a state of general disrepair. But we could see it had good bones, with a long span of cast-in-place concrete, and a long north-facing glass elevation. It was also large enough to be a mixed-use building, but small enough for us to be the major tenant."

McEvoy says the project provided an ideal opportunity for the firm to walk the talk in terms of sustainable design and workplace best practice. 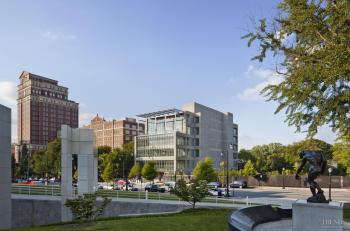 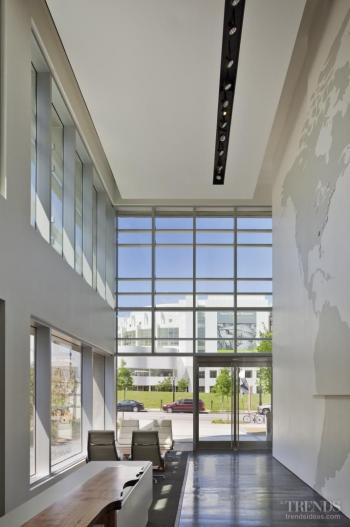 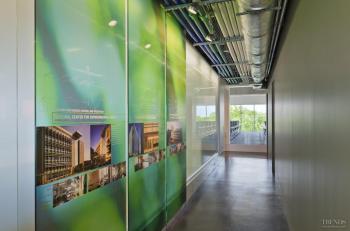 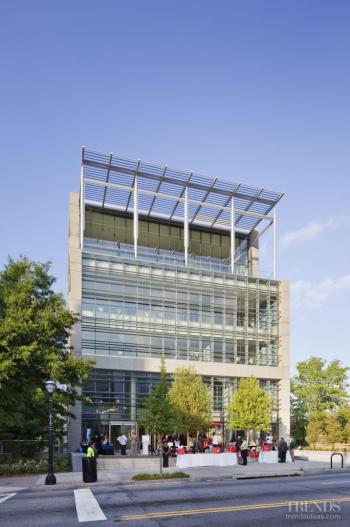 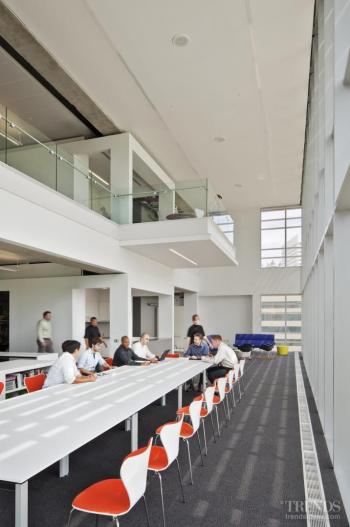 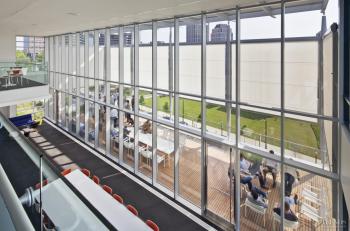 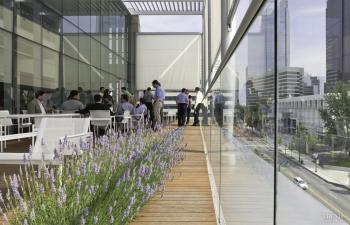 "The firm wanted to showcase its commitment to the environment and the transformative power of sustainable design through adaptive re-use and renovation. The building has consequently achieved a LEED Platinum rating, and is also a recipient of the Urban Land Institute's Development of Excellence Award and AIA/COTE Top Ten Award."

The need for energy efficiency helped determine alterations to the front of the building.

"The main exposure to the city is to the west, which was the most challenging solar orientation," says Cadrecha. "Setting the programme behind a self-shading curtain wall essentially creates spaces buffered from the heat and glare."

Horizontal shades that resemble air foils were added to the east and west sides of the building. These sit out from the glass, and are supported by vertical glass panes with ceramic frits. Additional shade to a terrace on the fifth floor is provided by dynamic sails. These are calibrated to move automatically so they shield the sun from the terrace and the two floors above throughout the day.

"People below are constantly seeing the building in motion as the shading devices move through the day," says Cadrecha. "The transparency also means the facade is further animated by the people moving through the interior."

"The scale of the building and its detailing is quite different to typical Atlanta buildings," says Cadrecha. "It has created quite a buzz in the city. People are interested to see what is going on inside – we even have regular tours."

What is going on inside is, in fact, a far cry from the typical workplace. In Perkins + Will's former office, staff worked in cubicles with low dividing walls. Here the workplace is open and staff are free to work wherever they wish, at desks, a long table, coffee tables or outside on the terrace.

"Staff work in many different ways, and are a lot more mobile," says Vaughan. "This has created a lot more energy in the workplace. And because much of our work involves teams, it's a highly collaborative space. We have team rooms where everybody can see the work as it is happening. We wanted to make it visible – for example, staff can write and draw on a long glass wall on one side of the team room. This borders the main corridor, so everyone passing sees all the writing in reverse."

Vaughan says all the work and breakout spaces are used constantly. And there has been another spin-off – the quality of the work produced has improved noticeably.

The sustainable design initiatives have also helped to create the perfect work environment. The building is equipped with raised flooring and a radiant heating and cooling system – the first of its kind in Atlanta. The design maximises natural light, with sensors automatically adjusting the amount of artificial light required. LED lamps further reduce the building's energy needs.

The building also features a trigeneration system, which uses natural gas to produce electricity. This means the building's carbon footprint is reduced by 68%. To reduce water consumption, rainwater is harvested, filtered, treated and recirculated for landscape irrigation and toilets.

All these initiatives have helped the building reduce energy consumption by 58% and municipally supplied potable water by 78%. In addition, salvaged materials were recycled for use by non-profit groups. This venture spawned the Lifecycle Building Center, which is a new, non-profit resource for repurposing salvaged material for future work in the region.