With their deep verandas, decorative fretwork and balustrading, traditional Queenslanders were always designed to have street appeal in abundance. But it was often a different story on the interior – these houses were invariably dark and inward looking.

All these challenges have been addressed in this major renovation designed by architect Shaun Lockyer of Shaun Lockyer Architects.

"The house has been given a contemporary treatment on the interior, and we wanted to make reference to this on the exterior," he says. "At the same time we needed to maintain the traditional, rather whimsical cottage features that define the Queenslander."

Lockyer says it was essential to disguise the large mass of the new garage, which is parallel to the street. Consequently, the floor level was dug down into the ground, and a new wall and landscaping introduced to the boundary. The trees will be trimmed as they mature, to create a hedge that will help to screen the building without blocking the view from above. 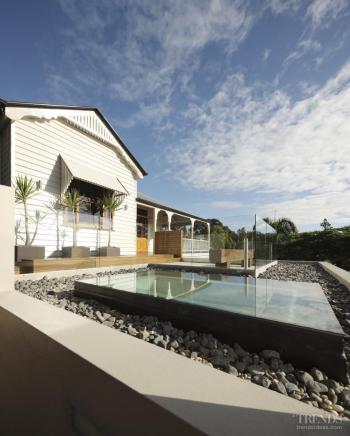 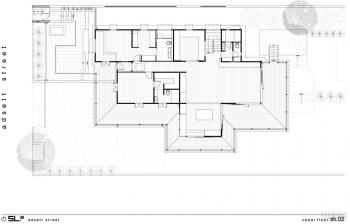 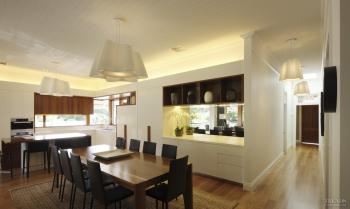 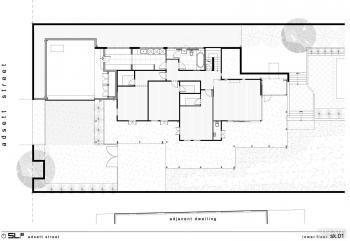 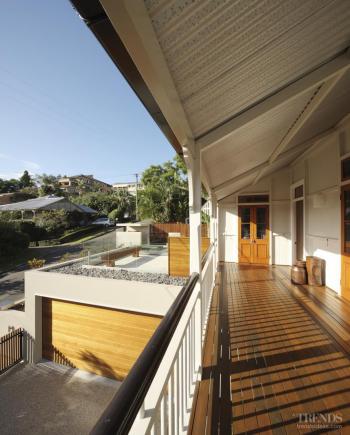 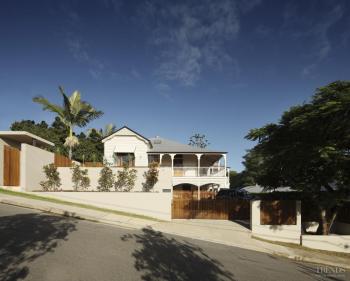 The pedestrian entry was moved to the far left of the wall, where a new gate is set beneath a contemporary canopy.

"This is a very deliberate structure that speaks strongly of the whole concept of entry," says Lockyer. "It has a solid form, like the garage, yet there is a degree of detailing and a play of shadow that adds interest. The path leads up around the garage and past a rooftop garden with a huge skylight that brings a flood of natural light into the garage. The skylight also works in reverse – at night it shines like a lantern, lighting the pathway."

The architect introduced a recycled timber bench seat to the rooftop garden, so the owners could sit and enjoy the expansive city view from the front of the house. Narrow spotted gum fence palings that echo the style of the existing balustrading are another new addition.

Although the front door is still in its original position, it now opens to a light-filled passage, courtesy of a new skylight.

"Formerly, this was a very long and dark hallway," says the architect. "As well as bringing in natural light, we shortened the length of the passage by removing a freestanding wall that formed the back of the kitchen in the living area. We also converted the last bedroom on the left into a study with a large sliding door – a new internal window maintains a strong visual connection with the living space."

Lockyer says introducing light into the dark interior and opening up the living spaces to the outdoors were the major drivers for the design, but these could not be at the expense of the heritage aspects of the house.

"We needed to work within the constraints of the envelope, and just touch the edges lightly," he says. "A lot of the changes were subtle, but they have made a huge difference in terms of lifestyle. For example, we replaced all the bifold doors to the verandas with large sliding doors. Traditionally, Queenslander verandas were designed for shade and shelter from the rain, not for outdoor living, so they are not overly large. When the bifold doors were open, the space on the verandas was diminished. The sliding doors provide a much more usable outdoor living area. They are also higher than the original doors, so let in much more light."

The design team moved the position of the kitchen and added a corner window to maximise a view that had formerly been blocked. The kitchen now receives more light than it did when it was in the middle of the house, and has a direct connection with the outdoors.

Shaun Lockyer Architects also undertook all the interior design for the project, replacing the yellowing, damaged hoop pine flooring with blackbutt hardwood. The colour of the floor matches the new rosewood doors and windows in the living areas. New ceilings replicate the original painted boards.

Wood also features in built-in cabinetry – the entertainment unit in the living room is a mix of ironbark and a white-veined black granite. And the kitchen cabinets team ironbark veneer with white lacquer. Textured furnishings and custom furniture and chairs painted in black Japan provide lively accents.

"Before the renovation, the entire house was death by beige, both inside and out," Lockyer says. "Although we have introduced a relatively restrained material palette, there is a richness to the interior that makes the home very warm and welcoming. We also ensured the exterior had a lot more visual impact by adding accents, such as the dark trim on the gutters and railings."