Belle of the ball

With its grand entrance and classical detailing, this new residence evokes the Georgian Colonial architecture of a traditional Southern estate

Belle of the ball Discover this article's resources 0

It's one thing to restore a grand residence to its former splendor, but it's quite another challenge to create that sense of established grandeur from scratch. It helps, however, to have one of the most picturesque country lots, as was the case with this large estate at Lake Sherwood, near Los Angeles.

The house, on several acres, was positioned to command the best views of the lake, a neighboring golf course and surrounding mountains.

Architect Richard Landry says his clients – legendary ice hockey player Wayne Gretzky and his wife Janet Jones – chose to emulate the Georgian red brick architecture of the local country club for their own home. This traditional architectural style was also in keeping with other homes within the gated community.

"The Georgian Colonial style is typical of the grand estates of the South," says Landry. "It is defined by a strong sense of proportion and symmetry, with tall, white columns – often two stories high – visually balanced against a classic red brick facade. These houses are also characterized by their balcony detailing and white windows flanked by black plantation-style shutters."

Landry says for this project the classic Georgian profile was interpreted slightly differently – the formal symmetry at the center of the house gives way to a more flexible architectural arrangement at either end. 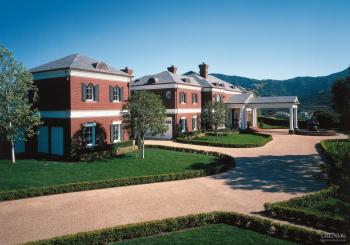 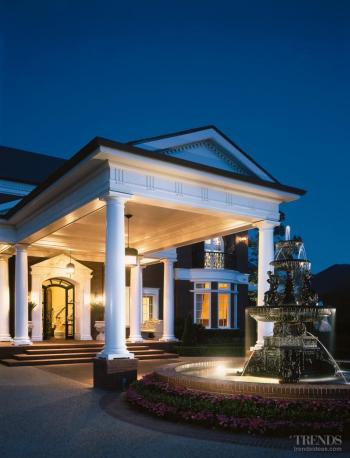 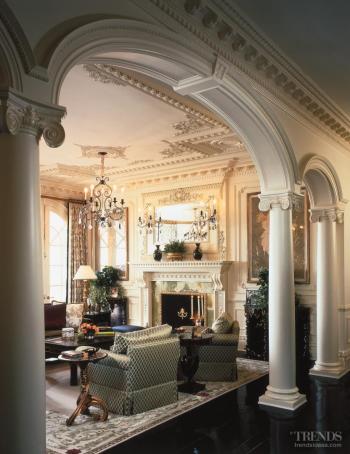 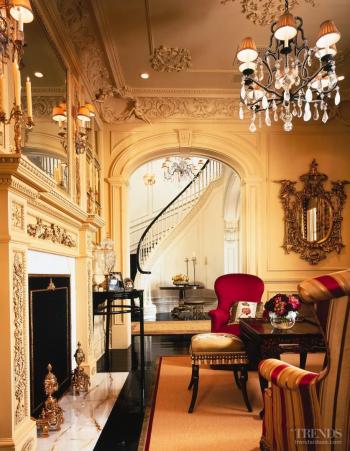 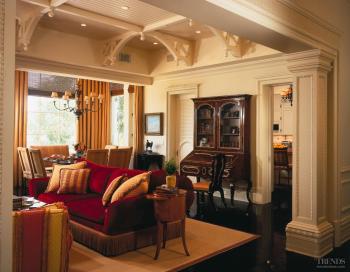 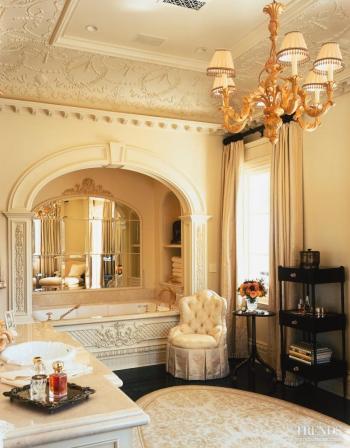 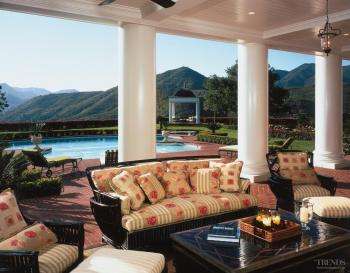 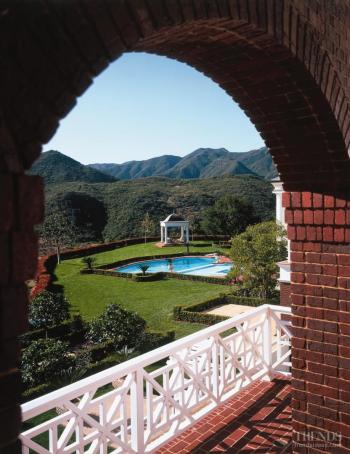 "A large building mass can be overpowering, so we have created three separate pavilions – the two at each side of the main building are not symmetrical. One of these buildings is a single-story detached guest house, and the other accommodates garaging with a carriage house above."

Project manager Brian Pinkett says breaking up the mass of the house was also a way to articulate the facade to achieve different roof lines and projections, rendering the house more welcoming.

"While all the buildings remain true to the main axial line, the porte-cochère in the center breaks up the linear look," he says.

The porte-cochère is also scaled to create a dramatic entrance – an effect heightened by the size of the columns and the double-height foyer beyond.

"Proportions are critical in attaining a sense of grandeur," says Landry. "The architecture of this house reflects classical proportions, which ensure it is pleasing to the eye."

But while the Georgian colonial traditions determined the look of the exterior, the interior reflects a distinct French influence. There is also a transitional aspect to the interior architecture, resulting from the need to provide modern amenities and an easy flow between rooms.

Landry says the owners wanted a home that would be appropriate for entertaining, yet still comfortable for raising a family. His design response was to create both public and private areas within the home, distinguished by different detailing.

"In the formal living room, we have introduced soft green nature shades. In other areas, red and gold dominate," says Lafia. "Many of the fabrics, including the rugs, incorporate silk, which provides a luster in keeping with the formality."

Lafia says she also mixed tapestries with stripes, florals, solid colors and tasselled fringes. Combining antique accessories and paintings with reproduction furniture pieces further enhances the sense of items that have gradually been acquired over time.

In the family living areas, the architecture and furnishings are less formal. Plank ceilings, simple moldings, and a conservatory-style breakfast room create a cozy feel. The kitchen has a similar intimacy, with its two ovens, beadboard cabinets and an island designed as a piece of furniture.

In keeping with modern lifestyles, the family living areas flow out to extensive terraces. Here, the owners and guests can relax on plantation-style furniture and enjoy the panoramic view or watch television on built-in plasma screens.