To ensure this home theater powder room would have an instant wow factor, the designer concealed the plumbing behind a false wall

Behind the scenes Discover this article's resources 0

Just as home theater design has become more sophisticated in recent years, so are guest facilities within entertainment suites being upgraded.

This remodeled powder room is adjacent to the home theater in a large house. Designer David Ellwood of Design & Decorate says the original bathroom was small and cramped – it included a bathroom, shower and vanity.

"The owners wanted an unadorned powder room," he says. "It was definitely a case of less is more. But they also wanted the bathroom to have the wow factor."

To enlarge the space by almost 2½ft, the designer pushed out the rear wall to meet the edge of the eaves. The new exterior wall was glazed, ensuring the room is flooded with natural light.

The simplicity of the design is enhanced by an Omvivo 7ft-long double washplane in white quartz. 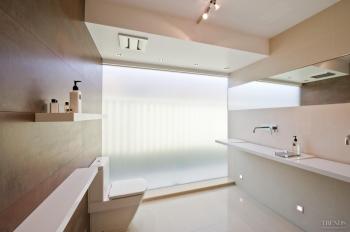 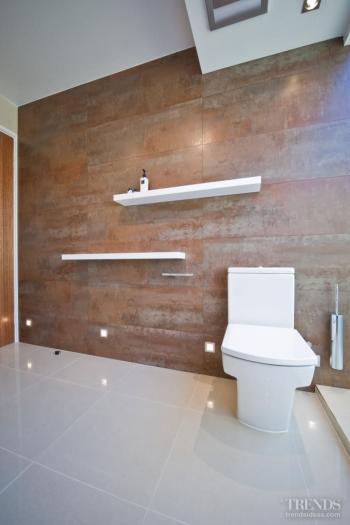 "The washplane provides a sense of drama," Ellwood says. "It creates a very thin, clean-lined vanity, which helps to lengthen the space visually."

A false wall was built to accommodate steel structural elements needed to support the quartz. The wall also hides all the plumbing and electrical services.

A tiled accent wall replaces the original shower wall, and adds a slight industrial feel to the room – the Ruggine Caldera tiles resemble rusty metal. Two thin shelves on the wall are the same thickness and material as the vanity.

Ellwood also designed a freestanding towel rail to fit with the contemporary look.