Upgrading a master suite is an ideal time to consider future proofing – will the design and functionality still suit your needs in the years to come?

The owners of this house took this into account when they planned a remodel, says architect Mark Evans of CG&S Design-Build.

"Because one of the owners has a disability, they wanted to ensure the bathroom would be accessible for a wheelchair," Evans says. "The existing bathroom was not well suited to their needs. There was a step into the shower, which only had a single wall-mounted showerhead. The bathroom also had a gigantic Jacuzzi and a make-up vanity, both of which were never used."

Evans says the dated decor, which included purple wallpaper, inexpensive cabinetry, bright brass hardware and carpet on the floor, was another reason to change.

"Fortunately, the bathroom is large, with a 10ft-high ceiling, so space wasn't an issue."

New his-and-hers vanities are in a similar position to the former cabinets, but that is where any similarity ends. The new cabinets, in knotty alder, include two tower units, which provide plenty of storage.

"To enclose the vanities and to make this area more intimate, we created a furr down. The towers meet this lowered ceiling, which gives a much neater finish than would have been possible with a 10ft ceiling."

One of the vanities is open beneath the sink to provide easy wheelchair access. And drawers alongside put items within easy reach.

A new bathtub features a polished granite tub deck that extends through to the new shower, forming a bench seat.

"We added curves to soften the look," says Evans.

Major structural changes were undertaken to create wheelchair access for the shower. Floor trusses were cut and the floor re-engineered to allow seamless entry.

The shower also features a hand-held showerhead as well as a wall-mounted fixture, and there are matching bronze handrails.

Evans says the color palette for the bathroom was largely determined by the porcelain floor tiles, which feature in another bathroom in the house.

"The owners liked this tile, so we used the same tiles for this bathroom floor and the shower walls, and we chose smaller versions for the floor of the shower. We then teamed these tiles with a beautiful natural quartzite stone tile, which runs along the front of the tub and into the shower."

Evans says the lighting was another area of concern in the original bathroom. This has been greatly improved with recessed can lighting, a central light and decorative sconces either side of the two mirrors. 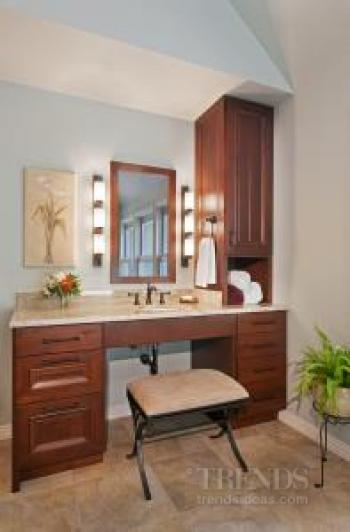 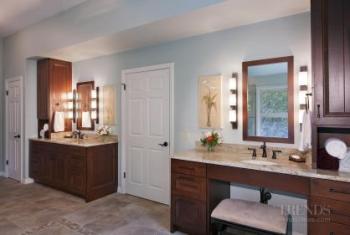 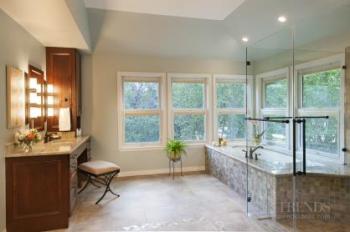 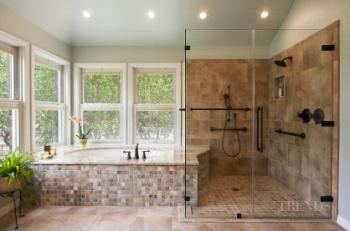 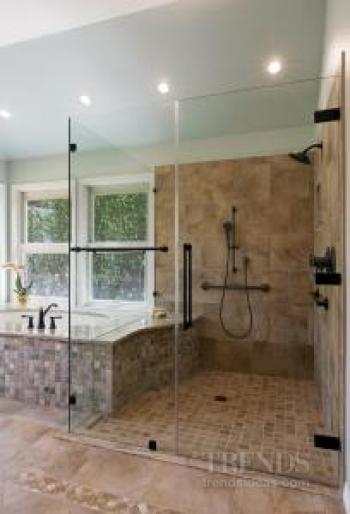