Wood cabinetry, a green tile splashback and understated slender benchtops all give this kitchen a furniture-like appeal so it doesn't stand out from its surroundings

The homeowners on this project wanted the kitchen to connect effortlessly to the interior and exterior living spaces – creating a functional yet casual kitchen at the heart of their new home.

Architect Roy Tebbutt at Strachan Group Architects (SGA) says the understated kitchen is positioned at the intersection between the main circulation hallway and the entry concourse – a pergola-like element that runs right through the interior and out to the lawn and pool area.

"Being an integral part of the home design process from the outset led to the kitchen becoming a logical extension of the materials and detailing seen elsewhere throughout the interior," says Tebbutt.

"And the connection doesn't stop there. The bamboo also connects with the home's window joinery and the slatwork that forms the pergola." 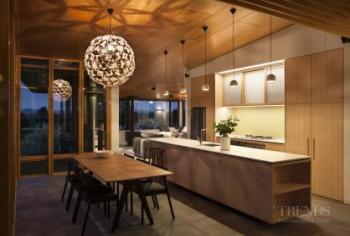 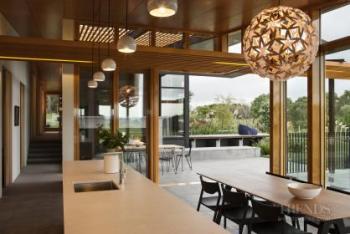 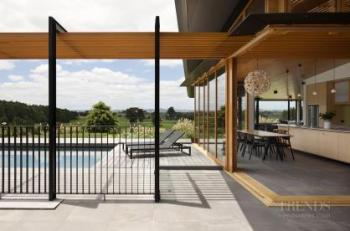 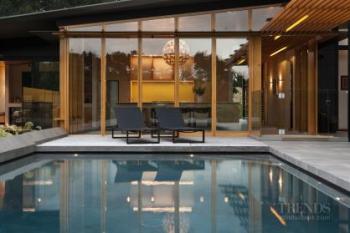 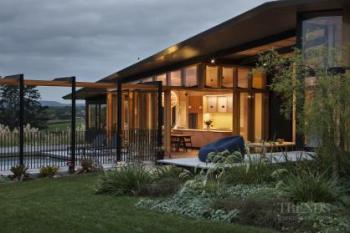 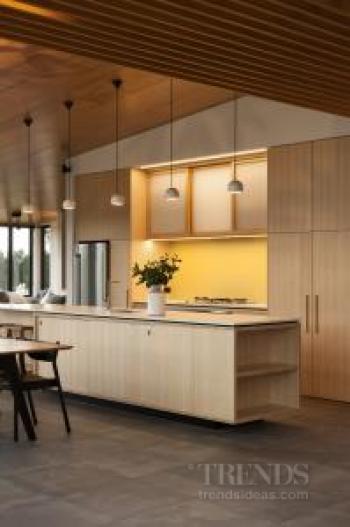 The modern plywood ceilings complement the bamboo cabinets, too, while the matt green splashback also tones in with both these warm, natural surfaces. The splashback is made from a single large-format porcelain tile with the matt finish helping to downplay rather than highlight the surface. And the engineered stone countertops with the look of Carrara marble are slender – again, downplaying their presence.

While the cabinetry and the island almost literally disappear into the woodwork, the kitchen's functionality is also downplayed in visual terms. The tall cabinet to the right of the cooktop includes a pantry with pocket doors that allow easy access to the internal countertop and shelves for food and appliances. The other tall cabinet that bookends the cooking area also has a small pantry that's used as a coffee station.

In addition, the ovens below the cooktop are partly concealed from sight behind the island.

The equally discreet rangehood is set flush under the central upper cabinet, its mechanics hidden behind the inoperable central frosted panel above. The panels to the left and right slide across to access additional storage space.

Everything was considered to merge the kitchen into the greater interior. The ends of the island have book shelves on them, giving the kitchen a furniture feel when seen from the hall.