Upgrading your kitchen requires a keen eye for balance and detail. On the one hand, the design needs to improve functionality, while on the other it has to look good in its own right, as well as relating to the adjacent spaces.

Designer and homeowner Shane George of Shane George Design renovated this kitchen space in his own home. The old kitchen had been finished in dark timber veneer and lacked ergonomic flow – although there was a small family room at the other end of the space, it felt disconnected, says George.

"As the owner, I wanted the renovation to both improve the operation of the kitchen and give it a fresh, modern appearance. At the same time, I wanted to introduce an informal dining solution that would connect family life to the cook and the kitchen," says George.

"To achieve this, I first had to rearrange the space. I repositioned the oven and microwave, integrating them behind cupboards on the side wall. I moved the cooktop forward onto the new island so the chef could interact with guests while cooking," says George. "I also moved the island prep sink to the back wall, helping to keep the messier aspects away from the public eye. A new walk-in pantry hides day-to-day clutter and a run of lift-door upper cabinetry stores occasional items."

There are niche storage elements, too – like the custom cupboard for coffee-related items to the left of the coffee maker. The hidden door slides outward, beyond the cabinet frame. 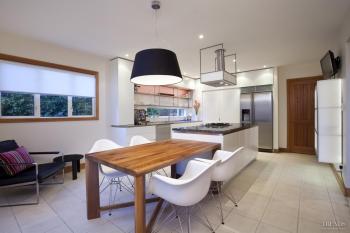 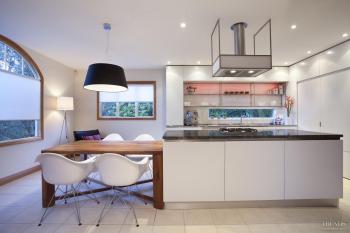 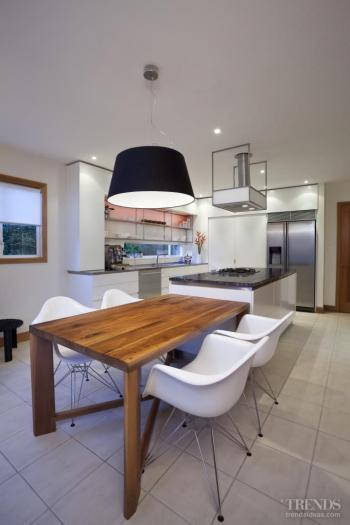 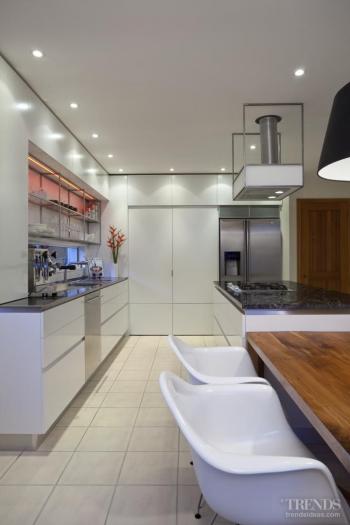 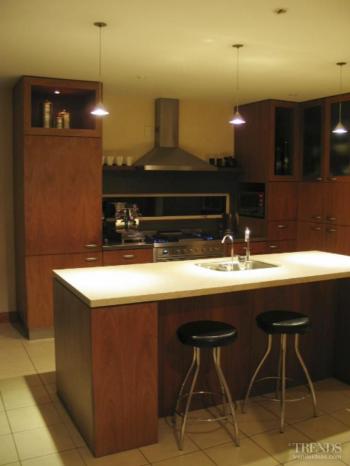 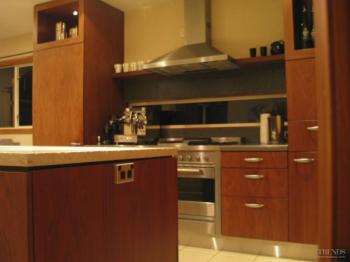 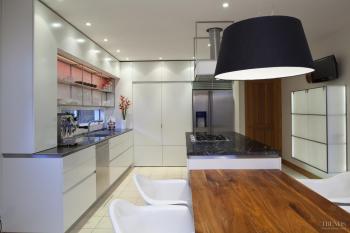 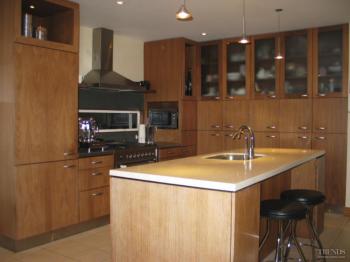 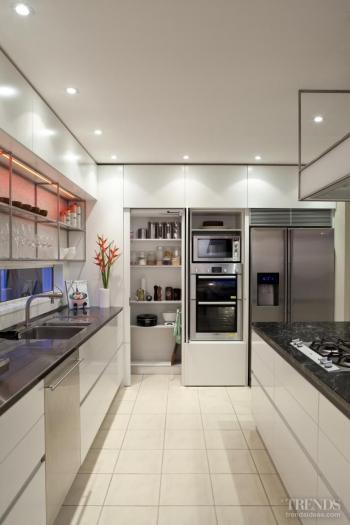 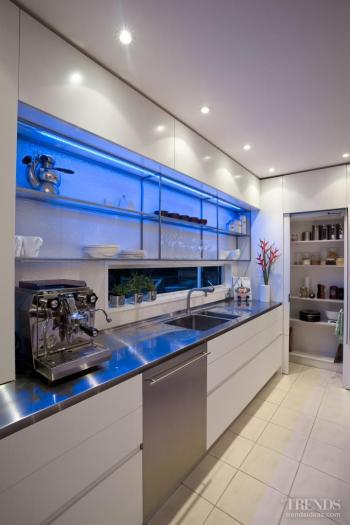 Other important elements included building a new end wall beside the refrigerator to achieve a more finished look and the addition of a solid wood dining table off the end of the island.

"The family often linger at the table in this area now, eating or chatting," George says.

The aesthetic of the kitchen was as closely considered as its layout.

"I wanted a semi-industrial, minimalist look but with some warmer touches appropriate to a family space – so material choices were key," says George. "The white lacquer cabinets, glass shelves and frosted acrylic cabinet doors and matching hood panelling all have a light feel – but most are tempered with cool metal edging.

"This stainless steel trim plays off the matt metal appliances, the toekick, and the perimeter benchtop, furthering the industrial feel. The black granite island counter grounds the space."

At the domestic end of the scale, the walnut table – created by Shane George – brings a warmth to the room. This blends with the wood window frames, drawing the space together.

"With so many plain surfaces, I wanted to add textural interest – another way to bring a domestic touch. The backsplash, in shiny glass mosaics, complements the pale tones."

LEDs enhance the mood of the space – a cool blue or a subtle red are among the options.