Back to the land – farmhouse remodel

Back to the land – farmhouse remodel Discover this article's resources 0

When new owners purchased this 250-acre farm property, it comprised an old, rather tired stone house and a number of outbuildings, but the location, in the Catskill Mountains area of New York State, was exceptional.

Architect Alexander Gorlin, commissioned to design an extensive renovation, says the house was encumbered by a number of ad hoc, haphazard additions built over time, from inexpensive materials. And the true character of the Dutch stone farmhouse was not revealed.

"The owners didn't really know they had a hidden jewel," Gorlin says. "But they could see the landscape was a spectacular place to have a weekend home. The property is approached through rolling hills, and you don't have any sense of the picturesque valley and the Catskill Creek below until you get to the crest of the hill near the house. The view has a tremendous pull, and this is enhanced by a triangular-shaped hayfield that forces the perspective."

Gorlin says the owners initially talked about adding new wings to the stone building, but it became obvious that it was essential to do something subtle – a design that wouldn't interfere with the scale of the original building.

The architect's solution was to create a series of linked pavilions of a similar scale to the stone structure, but with differing angles and setbacks – a train of buildings, such as you might see in a small village. 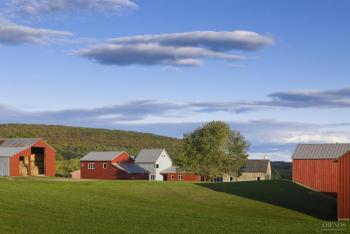 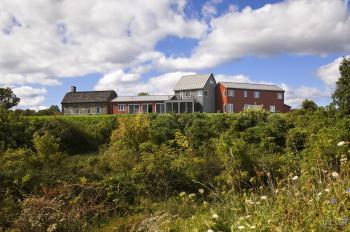 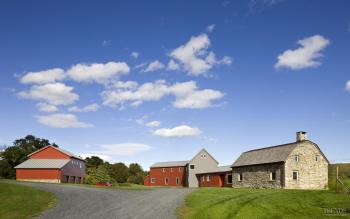 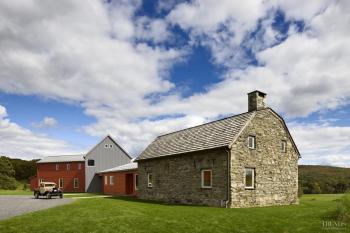 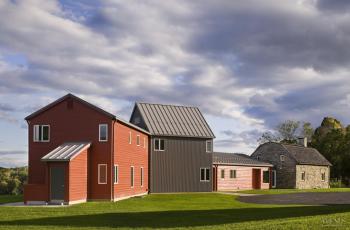 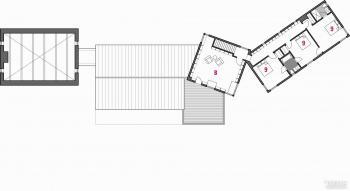 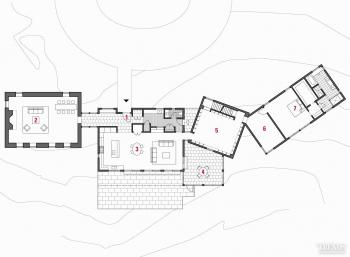 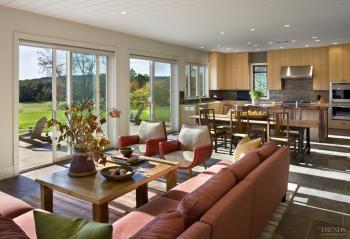 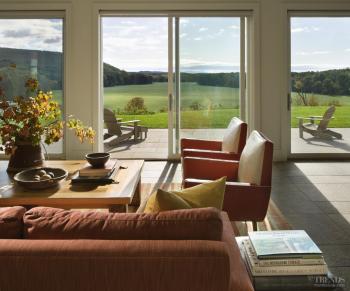 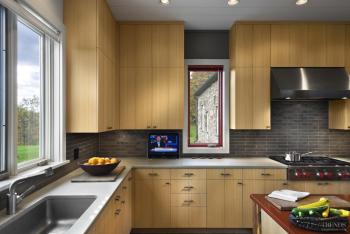 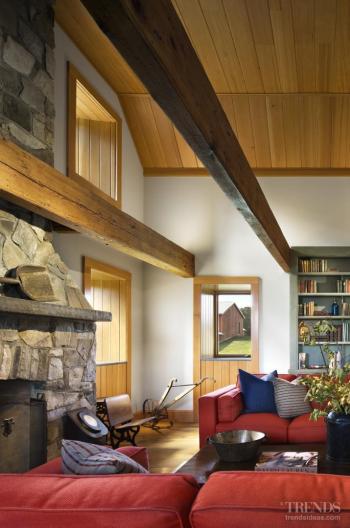 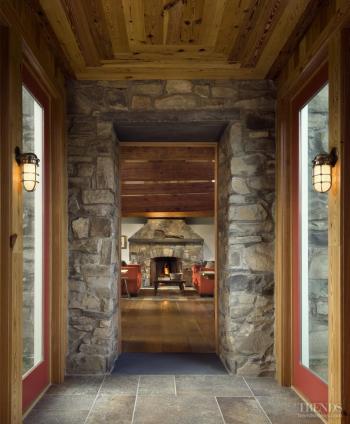 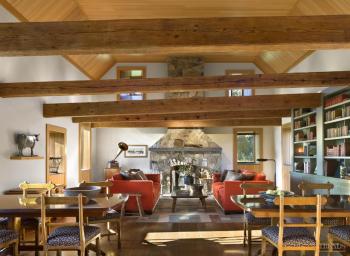 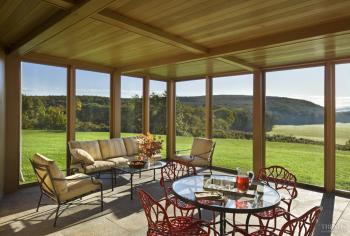 "They are all different, but they were all designed to echo the architectural vernacular of the farm buildings on site. For example, two are clad in red-painted wood siding, similar to the red barn buildings, and one of the two double-height volumes features corrugated steel."

Gorlin says he wanted to keep each pavilion as simple and primal as possible, to retain the essence of the architecture. Small high windows on the front of the buildings echo the rhythm of fenestrations in the stone structure.

"I also designed the house to read as a solid line on this side – like a wall that partially blocks the view on arrival. This allows the outlooks to open right up as you move into the house, which has extensive glazing on the other side."

Highlighting the original stone farmhouse as a stand-alone structure was another priority. The farmhouse has a long history – it was built by pioneering Dutch settlers in 1761. Beaten iron tie-rods that hold up the giant oak beams are inscribed with the date of construction.

The architect consequently created a fully glazed transition zone between the building and the adjoining single-story volume with the kitchen and family living area. This circulation space also accommodates the entry, which means part of the exterior of the stone structure is now on the interior of the house, and can be seen as you enter through the front door.

To further link the inside with the outside, the use of bold colors and contrasting textures continues on the interior, which was designed by Garrow Kedigian. Several of the interior window sashes are painted red like the barns. Sofas and chairs, in a mix of contemporary,classic and Mid-Century Modern styles, also pick up the red shade.

The original stone structure was gutted and restored to create a large great room. A loft was removed to highlight the huge beams, and to open the room up to the high vaulted ceiling, which is now lined with cedar. At night indirect uplights allow the ceiling to glow, creating a warm, inviting living space.

To make the small windows in the great room seem more significant, the designer added deep bluestone sills and cased the windows in pickled oak, extending the wood paneling to the floor. The same wood also features in the kitchen in the modern family living space. Flush doors and drawers give the kitchen a streamlined look, while the wood imparts a modern rustic flavor.

The house also incorporates 250-year-old wood beams and boards salvaged during the restoration of the stone building. Part of the beams appear on the corners of the kitchen island, while others were used on banisters.

As with the ceiling in the stone building, cedar boards line a large screened porch off the family room, which functions as an outdoor room. Other rooms on the first floor include a library, in the angled, double-story corrugated steel pavilion – the upper level houses a study. The master suite is on the lower level in the final pavilion, and has an adjoining sitting room. The upper level of this pavilion provides another three bedrooms and bathrooms.

Gorlin says the house is a significant, yet welcome departure from the owners' other home – a very modern glass building in the heart of Manhattan.