Back to the essence

Back to the essence Discover this article's resources 0

Martha's Vineyard is renowned for its colonial architectural heritage – from the seaport village captains' houses with their fanlights and widow's walks, to the gabled, shingle-clad family homes that dominate the landscape.

This New England tradition continues to influence the design of houses throughout the district. But for one architectural firm, a more subtle interpretation is providing a modern design solution.

Hutker Architects has developed a new regional vernacular that puts a contemporary spin on the past. Architect Charles Orr says this architectural style is a simplified version of the traditional, colonial houses – one that takes the design back to its essence.

"Many New England houses have become over-decorated," Orr says. "We have stripped that decoration away, to focus on the shapes and forms that characterize this style, bringing the design down to its simplest form."

The house featured on these pages reflects this approach. While the materials, including the shingled siding, white cedar shingle roof and fieldstone chimney, are typical of the region, the design has been pared back. 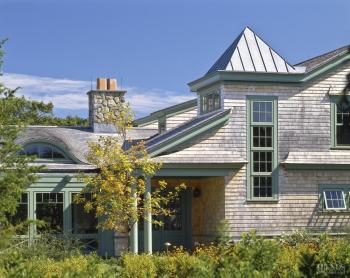 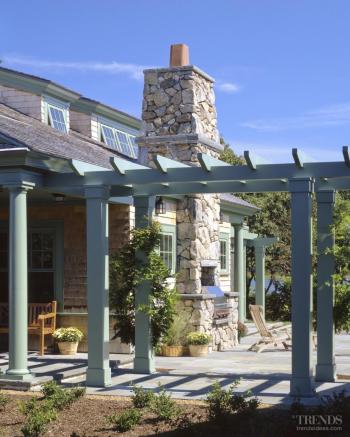 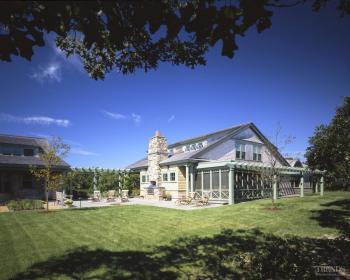 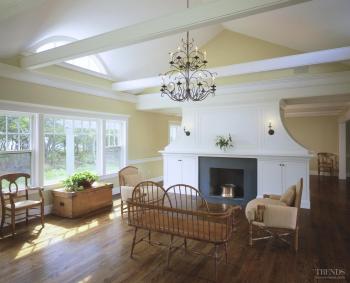 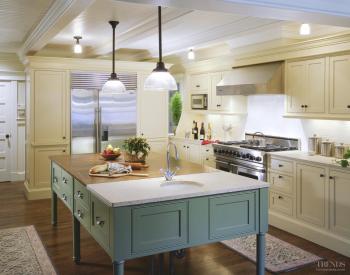 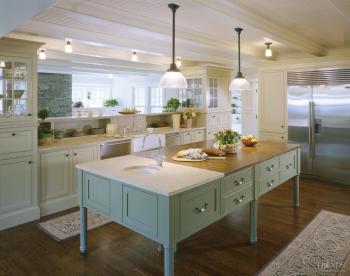 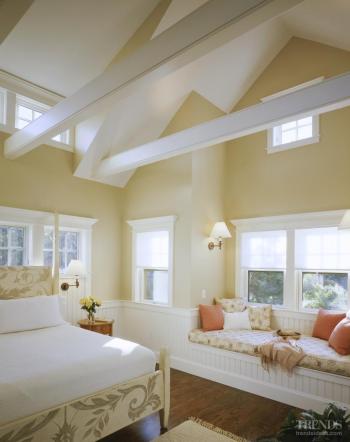 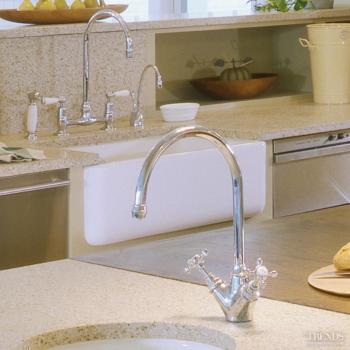 "The traditional gables, and the eyebrow windows are still there, but the house has a much simpler look," says Orr. "It also has a stronger connection to the surrounding landscape, which is a wooded lot overlooking the water."

The design team wanted the house to have a low profile so it would fit snugly into the landscape. Consequently, the house incorporates three distinct buildings, linked by pergolas. The main part of the house is one large gabled form, perpendicular to the water's edge. An open walkway connects this building to a garage and guest quarters, while a covered pergola links the house to the separate master suite.

The layout provides several outdoor rooms, with a series of gardens and terraces ensuring there are plenty of sheltered spaces for outdoor living. A screen porch is an additional transitional space where the family can relax outdoors.

The main entrance to the house is at one side, beneath large eaves.

"Traditionally, these houses have an entrance in the center," says Orr. "This arrangement is a little different – the energy of the raked roof focuses attention on the corner, highlighting the formal entry. We have added a tower element that further defines the entrance, but it is a perceived tower rather than a realistic one. A more usual treatment would be to pull the tower forward and express it in a vertical sense. This design flattens it out, providing a subtle, contemporary option."

Orr says the window arrangement reflects the local vernacular, with small top panes above large single panes. The arrangement and size of the windows, however, brings more natural light inside.

"Even though the windows are larger, we have deliberately retained the traditional proportions, ensuring the windows have a residential scale."

The interior reflects a similar attention to scale and proportion. The living room, for example, has solid, painted beams crossing beneath a high cathedral ceiling.

"The beams are structural, but they also help to express a sense of scale," he says. "They visually lower the ceiling to provide a more comfortable living space."

The main living areas all overlook the water, with the design providing an easy flow between each room.

"We designed pieces of furniture to delineate the rooms," says Orr. "The large fireplace surround, which incorporates cabinets and shelving, separates the formal living room from the dining room. And the kitchen and family rooms are also separated by freestanding furniture pieces. It feels as though you are in a big room, but each area is still cozy."

A large island in the kitchen, which resembles a table, incorporates drawers and a sink for food preparation. To further enhance the furniture look, the island is painted in a subtle olive-green tone, similar to the house exterior. The rest of the Shaker-style cabinetry is a soft yellow finish – a variation of the color tones that appear throughout the house.

Quiet colors are also a feature of the master suite, which has a similar cathedral ceiling to the living room. The bedroom has a window seat built into a small nook, creating an inviting reading area.

A similar nook in the bathroom features a large tub. Again, the windows are positioned to maximize the view, with blinds that can be rolled either up or down. However, the design team says the size of the lot and the woodlands ensure the house is a always a private retreat.