Faced with a limited floor area and a need to create the feeling of space, there are several options to pursue. Letting in a wealth of natural light is one. Introducing compact furniture is another. A third option is to increase the usable floor area by trading alcove space with an equally constrained neighbouring room.

All three approaches were taken when outfitting the ensuite and main bathrooms featured on these pages. Several elements combine to increase the rooms' sense of space, says architect Kerry Fyfe of Monckton Fyfe Architecture & Interiors.

"Alcoving the benchspace in this main bathroom was an important design feature that increased storage and usable floorspace in both rooms," says Fyfe.

The design provides more room to move and gives an increased view of the limestone floors and as a result an illusion of greater size. This effect is furthered with elements such as a free-standing bath in one and a cantilevered sink in the other.

"In a limited-sized bathroom, a free-standing bath might seem a luxury, but this appearance of a casual use of space brings a feeling of spaciousness," she says. "While appearing to be placed casually, the bath's exact position was carefully considered to allow maximum breathing space between the wall and tub. And at the same time, leave ample room for movement between the bath and basin." 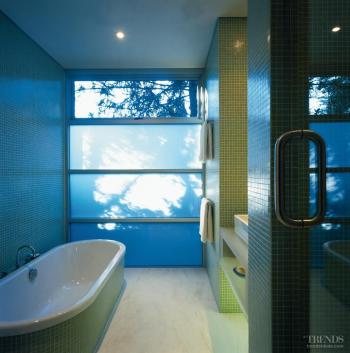 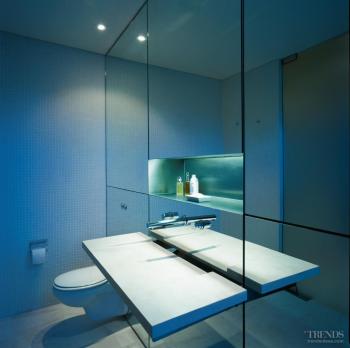 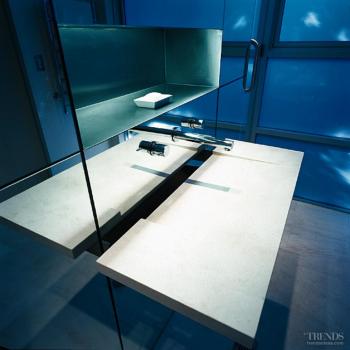 Introducing a wall of windows to a bathroom floods the area with natural light. When this is combined with a use of glass tiles and mirror walls, the effect is calm and expansive. Pale blue and green wall hues add to the feeling of serenity and, in this case, tone in with limestone floors.

"Bathroom storage is hidden behind mirror-fronted cabinetry above the basins, while the showers are unobtrusively tucked away behind glass doors – flush with the wall lines," says Fyfe. "Again, these elements help to keep bathrooms looking simple and commodious."