Contemporary offices offer every business advantage, from high-tech tools to sustainable features that improve natural light and indoor air quality. However, as social animals we're always at our best with a sense of common purpose, and that can be reinforced simply by bold wall graphics or encouraging staff to pass through other work areas en route to their own.

Mechanical engineering giant Aurecon recently opened its new head office in Aurecon House in Melbourne. The fit-out is an excellent example of a corporate strategy reflected in the geography of the workplace. Aurecon House attracted a 5 Star Green Star rating from the Green Building Council of Australia for the base build and Aurecon targeted a similar rating for its office interiors on levels four to nine, says interior designer Sue Solly of Geyer.

"Besides reflecting a sustainable agenda, part of Aurecon's own stock in trade, the project had to demonstrate the company's global reach to staff and visitors," Solly says. "The reworked interiors also had to bring a sense of togetherness to the 700 staff who had been accommodated over ten floors in their previous address."

Geyer's fit-out brings to life Aurecon's brand and business aims – to be leading, vibrant and global.

Integral to the design is a wide new central stairway that provides a pedestrian link and vertical views between all five floors. This offers a visually inviting and healthy means of moving between floors. To further encourage movement between the levels, facilities are decentralised. For example, printing is on level six and training rooms on level five. There is also an open-air terrace on level five, which overlooks adjacent parklands. These destinations ensure staff move through the interior, reinforcing a commonality of purpose. 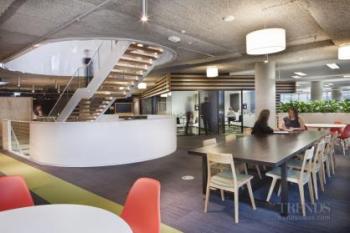 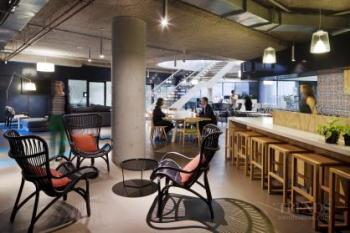 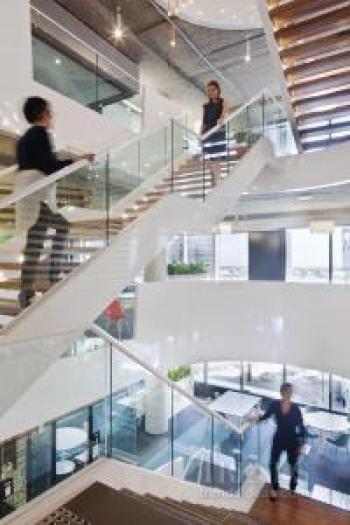 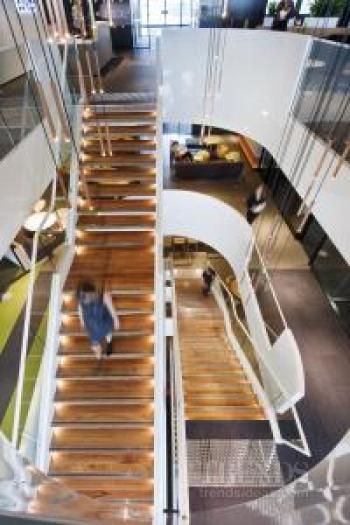 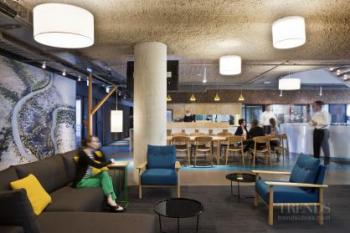 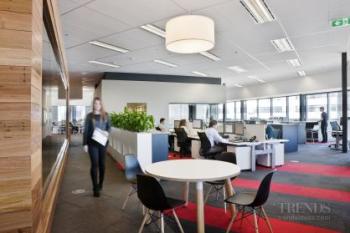 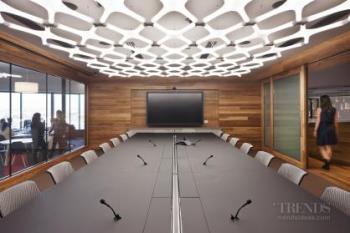 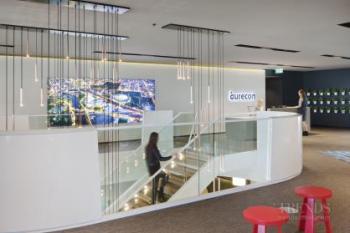 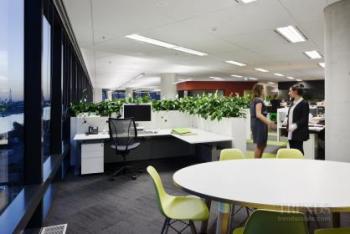 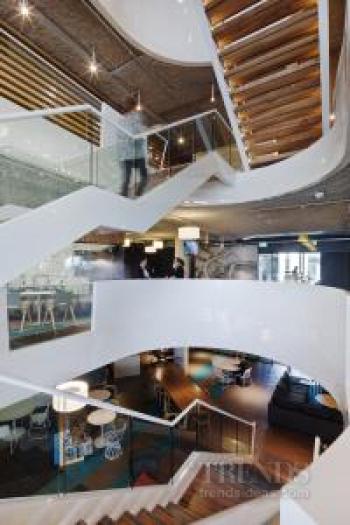 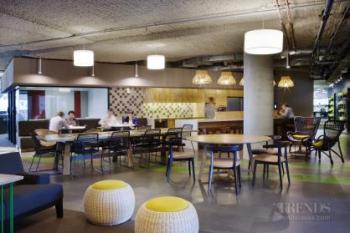 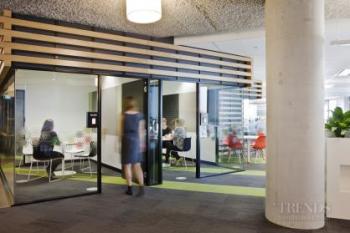 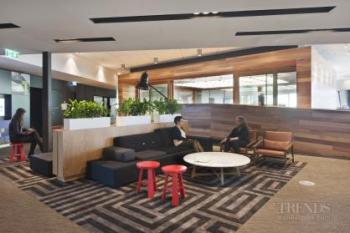 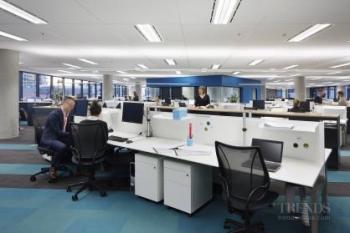 "This project is very much about connections," says Solly. "A series of pavilions with meeting rooms and quiet spaces is set off the stairway at each level. The stair is also close to the elevators. On level five, a terrace provides a venue for social gatherings with views of the nearby park."

Aurecon's brand colours, blue and green, are highly visible on all floors, can be seen through the stairwell, from above and below. And every level has its own geographical theme displayed in wall graphics and decor, each one showcasing an area of operation for the world-wide company. Asia, Africa and Australasia are some examples, with wood slats on the Asia level and perforated screens on the Middle Eastern-themed floor evoking the area and culture. The uppermost eighth floor, however, has an encompassing international theme.

While workers can travel by elevator directly to their own floor, visitors arrive at this top floor and either remain on that level or are escorted down the staircase to their specific area of contact – passing the company's branding and international themes along the way.

"We decided to strip out the ceilings in some areas, too, as another way of expressing the company's commercial engineering expertise," says Solly.

"The top floor has a high-tech boardroom, called The Best Room in the House. And it does indeed have the very latest technologies to hand, with interactive displays, connectivity and other business tools."

Having the naming tenant as the mechanical engineer proved invaluable to the project. Early in the piece, Aurecon and Geyer moved the columns away from the facade to maximise the views from workstations and the natural light. Aurecon also reconfigured plant requirements on the top floor, freeing up additional office space to the benefit of its own business and the developer.

In pursuit of the high Green Star interiors rating, Geyer chose all finishings, furniture and fittings for their sustainable attributes. To provide natural ventilation, there are operable perimeter windows, and there is a localised air conditioning flow that far exceeds code requirements.