Many old houses have a charm that is hard to replicate. But adapting such homes to modern lifestyles can be a challenge. Rooms may be numerous and tiny, and there may be add-ons that detract from the original character. Such was the case with this large farmhouse, built in the 1860s. But the owners say the property’s history, as well as its character, determined their choice to remodel, rather than re-build. The property is a prime example of the pioneer farm buildings established in Minnesota during the mid 19th Century – the deed to the property was signed by Abraham Lincoln. “As well as the original log farmhouse, there was an old barn. Due to local building regulations, this would have been lost if we had chosen to build a new house,” says one of the owners. “For the family, there was also a sense of place – a connection with the land, which comes from having family living in the area for generations.” The owners commissioned the services of remodeling specialist Bill Ziegler. Both the farmhouse and the barn were extensively remodeled over a period of several years, a process the owners describe as evolutionary. “No one sat down with a master plan. The remodeling simply evolved as we tackled one area at a time, but maintaining the traditional character was a priority.” Ziegler says every part of the original farmhouse is intact. “There is still a log house within the building, but some exterior walls became interior walls, as the house was extended,” he says. The roof was replaced with hand-split cedar shingles and new stucco siding added. Local field stones were added to the base of the exterior to help visually anchor the house to the land. “The stone, similar to the existing retaining walls, was not part of the original farmhouse – it would have been considered unnecessary decoration in the 1860s,” says Ziegler. Inside, openings were cut in walls to link rooms that were formerly too small and unconnected. “The interior is now wide open, with an easy flow between living spaces, making it much more suited to modern lifestyles,” says Ziegler. “At the same time, however, each room has retained its own character and is in keeping with the traditional farmhouse theme. For example, several of the original beams were exposed to leave some of the history and character of the old house. The window jambs are 18in thick, which adds to the sense of permanence.” The decorating also reflects a cozy farmhouse feel. Interior designer Karen Canton, who decorated the formal living room, dining room and front hall, says warm colors were introduced to brighten a potentially dark space. “The faux finish on the walls and the use of gold tones add a cozy, comfortable feel to the room,” she says. “Introducing a variety of different fabric patterns in tonal colors was also a way to make the space more friendly, and gives the impression the room has been furnished over a period of time.” The windows feature traditional French-style wood valances, with an antique paint finish. Unlike the living room, which is in the old part of the house, the kitchen and breakfast room are in a new wing. Here, hand-carved beams were crafted to look like the original beams in the barn. Interior designer Mari Jo Mundahl says every element of the kitchen was designed or chosen to enhance the sense of an authentic French Provençal kitchen. Cabinetry, in different woods, was designed to resemble furniture pieces, and disguises integrated appliances. There is also a red baker’s rack and a large island with a distressed paint finish. Red-toned furnishings link both rooms, and were inspired by the fabric on the large wing chair in the breakfast room. The random-pattern, flagstone flooring is another connecting device. “Using the same flooring throughout the living area is the key to blending the old with the new,” says Mundahl. “For this project, master craftsmen installed it to match the original pattern.” The barn was also extensively remodeled to provide a guest suite and kitchen. Although new wood lining has been added, the barn features all the original exposed beams and trusses. An 85ft tunnel now connects the barn to the house. 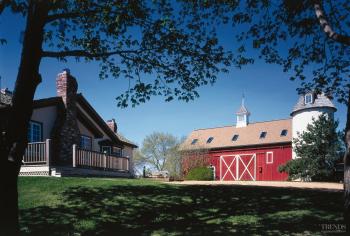 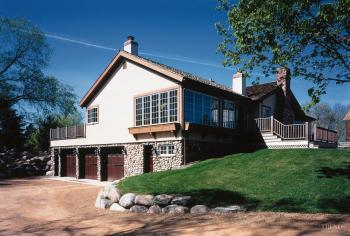 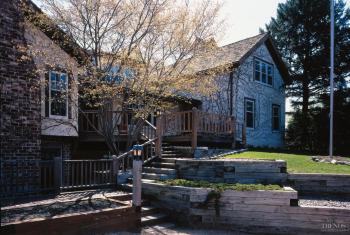 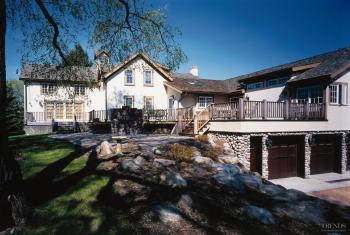 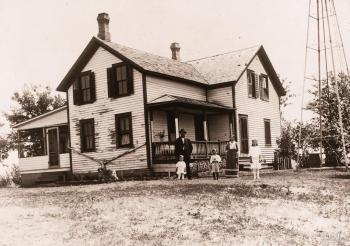 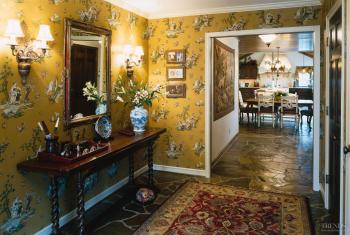 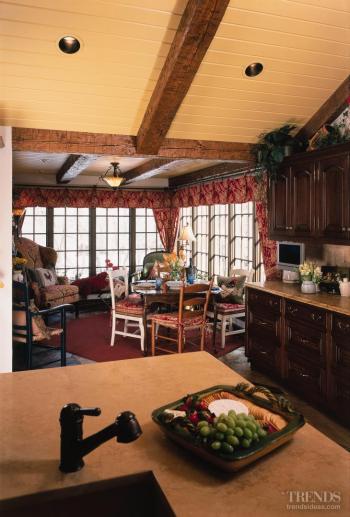 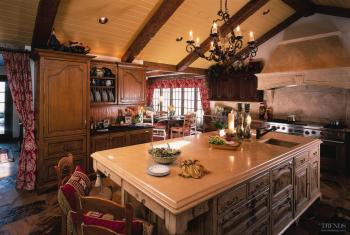 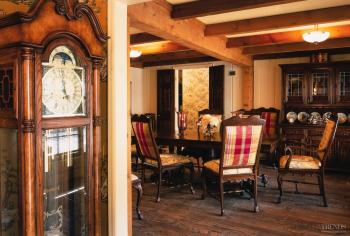 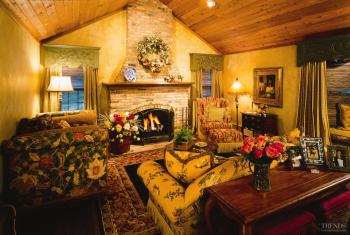 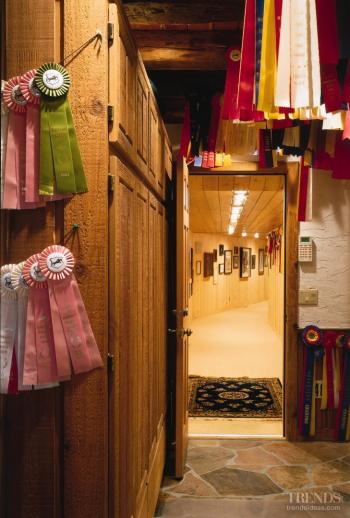 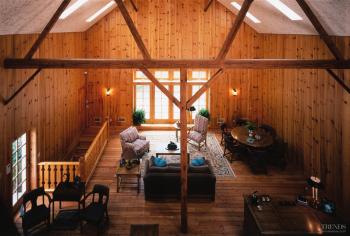 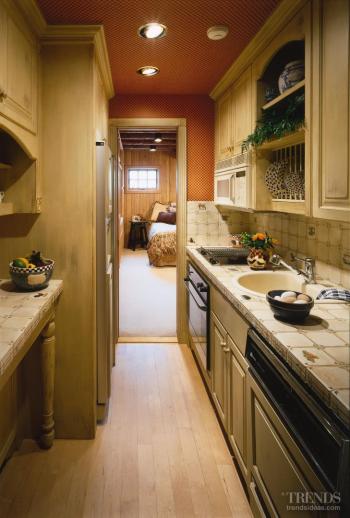 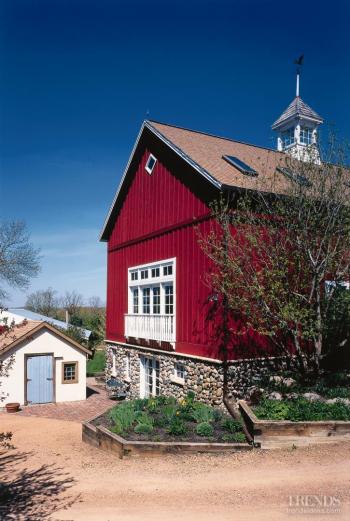 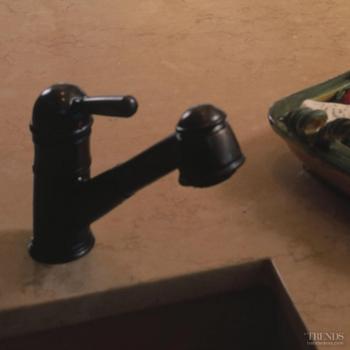