In a country where the automobile dominates, local authorities have long recognised that the best way to encourage people to leave the car at home is to provide great public transport alternatives.

But such alternatives require extensive planning, and for Orange County, it is only now that a key initiative has finally come to fruition.

The Anaheim Regional Transportation Intermodal Center (ARTIC) is the new heart of the county's transportation system, providing easy transfer and connectivity between numerous large venues and destinations, including the Angel's Stadium, Disneyland, The Honda Center and the Anaheim Convention Center.

For the team commissioned to design the transit station – a collaboration between Parsons Brinkerhoff and HOK – the project provided an opportunity to create a new landmark that would announce its presence with a strong architectural statement. HOK design principal Ernest Cirangle says this was precisely what the City of Anaheim required.

"There was an existing station 1000m down the line, but it was very modest, and essentially just two platforms at the side of the tracks," he says. 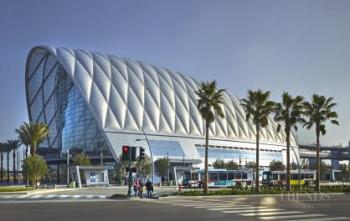 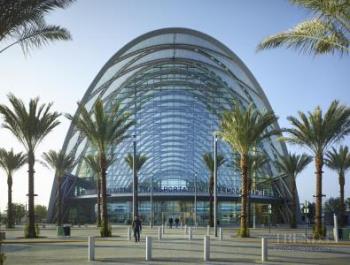 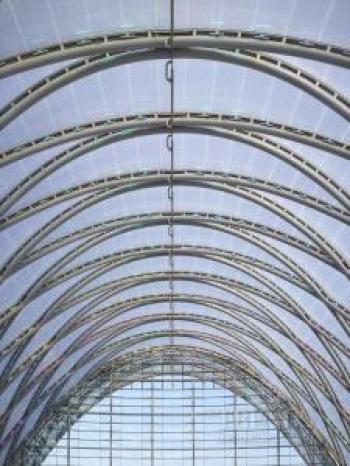 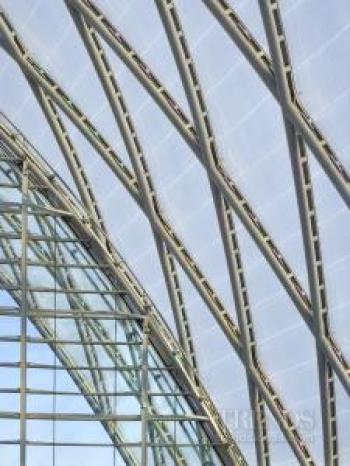 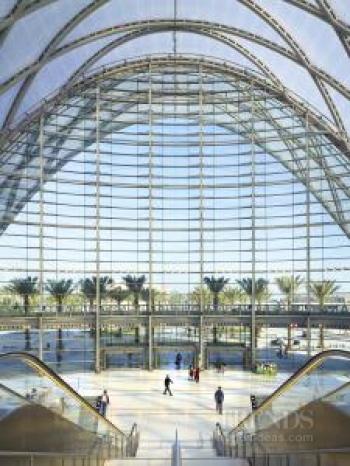 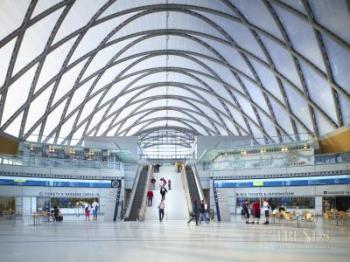 "The city wanted to replace this with an iconic building that would make a statement about the future of rail and public transport, not just for the city, but for the whole of Southern California and in a way for the entire nation," he says. "The city wanted to be at the forefront of this change, and the new centre needed to energise the move towards a 21st-century rail network."

Cirangle says there were two key historical influences that helped to inspire the design.

"The grand old rail stations in the United States and Europe, including Grand Central and Penn Station in New York were definite influences. So too were the great hangars that were used to house blimps in the post-World War II era. These were simple, long-span structures with great interior spaces. Their appeal lay in their simplicity and their clarity. We envisaged a contemporary version of this form that would not only reference traditional rail stations, but also take advantage of the great natural light in Southern California."

To maximise the light ETFE pillows were specified. These cover more than 18,580m2 and are supported by a diagrid of steel arches reaching up to 33.5m.

"The translucent pillows let the natural light flood into the interior," the architect says. "The ETFE is also extremely efficient and lightweight, being 1/100 the weight of glass. The roofing comprises three layers, with each pillow fastened at the edges and inflated by pressurisation in the inner chamber. The shape and form of the pillows provides added stability. It also gives them a quilted pattern that is quite unique."

Cirangle says that during the day the roofing appears quite solid from the exterior, but from the inside it resembles a veil. At night, that reverses and the station appears as a beacon. Computerised LED lighting on the pillows allows the colours to be changed as desired.

The north side of the station is fully glazed, providing transparency for travellers moving between buses and trains.

"Passengers entering from this end arrive at the base of the grand hall, which is almost like being outside. They then ascend to the mezzanine level where there are restaurants and cafés. From there they can move through to a waiting area, on to a bridge over the tracks, and down to the respective platforms. There are multiple tracks and platforms and we chose to have the entry from above, rather than below, so passengers have a clear view of their destination."

Cirangle says that clarity of orientation was a critical factor in the design.

"There is scarcely a need for signage. The flow is intuitive, which was one of the key functional requirements in terms of making the building work. At the same time, we wanted to make it a very enriching, enjoyable experience for travellers."

Not surprisingly, sustainability was also high on the design agenda – the project has been designed to meet LEEDS Platinum criteria.

"The entire project comes from a sustainable base, in that it encourages the use of public transportation," says Cirangle. "The efficiency of travelling between cities and venues using rail, buses and shuttles linking at one central depot is a major improvement on previous public transit systems – it puts every venue on the doorstep."

The building itself features a mixed-mode natural ventilation system, with a radiant water-cooled floor in all the public spaces.

"Both the shape and height of the building help with the ventilation strategies," says the architect. "Air is drawn into the building at a low level, then rises with the heat to the roof, where it is exhausted through high louvres in the end walls. Because there is cooling at the floor level, the interior maintains a very even temperature."

Other eco-friendly features include an energy generating photovoltaic array, which is positioned in the south parking lot. Grey water is used for irrigation, toilet flushing and the cooling towers.

Cirangle says the design is the first phase of a major redevelopment of the county's rail system.

"Anaheim is the first station to be built to cater to the proposed California high-speed rail link between Sacramento and Los Angeles. It is essentially a prototype that sets a benchmark for future development."