In this renovated Victorian row house, a double-height Mondrianesque window transforms the rambling garden into a living work of art

Piet Mondrian, the celebrated Dutch artist, is said to have gazed out his apartment window and exclaimed, "Trees! How ghastly!" How ironic then that architect Paul Florian has chosen to use a glass interpretation of Mondrian's most famous paintings to showcase the greenery of a Chicago garden. Florian's window design is not just a portal to the garden, but a piece of art in its own right – although he maintains its most important function is lighting the formal dining and living areas.

"A lack of light was central to most of the shortcomings of this home. Following a remodel in the 1950s, the house had a clean, minimalist aesthetic, that was somewhat cold. The first thing we did was remove an internal wall to open up the kitchen to the light. Then we brought the first floor back from the window some five feet, which allowed more direct light to permeate the lower level," he says.

The staircase used to run laterally across and down the window, but removing a section of floor allowed space for an industrial cantilevered staircase, which promotes a linear journey through the house. Florian chose to use industrial elements throughout, especially favoring the recurrence of materials as a means of linking spaces.

"Materials in the house repeat in a vigorous way. The Burlington stone set at the foot of the staircase is repeated at the base of the fireplace, along with the quarter-inch steel used in the staircase itself. The same thickness of glass is evident in the balustrade, the shelves, and in the floor linking the living room to the kitchen" he says.

The Mondrianesque framework of the windows is almost an entire story in itself. The composition of rippled and clear glass was not arbitrary, but instead reflects the way the homeowners interact with the view of the garden. 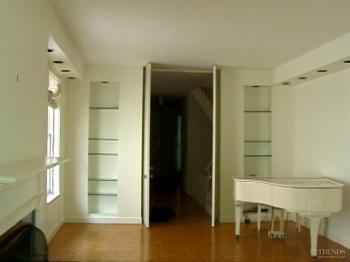 "If you look at the way the pane in the top right-hand corner is rippled, you'll see it protects the owners from the most unsightly part of the view – the wires and railings on the street. The design is such that the window must be viewed as a whole, hence the glass balustrade on the upper level. The clear glass frames different sections of the garden, while the rippled glass was carefully chosen to obscure vision, but not light. The rippled glass is quite similar to shower glass, in that it refracts the light instead of blocking it," says Florian.

"We liked the spiral staircase. The previous architect had used it to drop light into the lower areas. We framed it with dark metal edging and railings to accentuate its place as the vertical centre of the building," he says.

The adjacent kitchen has clerestory windows only inches above the level of the road. Bleached white oak flooring, chartreuse cabinetry and white walls further lighten the room. Having already opened the kitchen up to the garden, the designers also specified heavily veined marble counters, which mirror the movement and patterns of the trees in the garden.