Anchored to the land

With its solid stone base and sweeping eaves, this European-style farmhouse conveys a sense of enduring history

Anchored to the land Discover this article's resources 0

The architecture of country homes takes many forms – from the grand and imposing to simple, humble abodes. But for the owners of this rural property, inspiration came from traditional Eastern European farmhouse architecture.

Project designer Charlie Simmons of TEA2 Architects says his clients wanted an unpretentious house that would convey a sense of history.

"They wanted the house to settle into the landscape, and look as if it had been there for the past 80 years or so," he says. "After researching farmhouse architecture from all over the world, it was the Eastern European influence that appealed."

Key features of this style include the steeply pitched, shingle roof with its low, eyebrow eaves, and the solid stone base that visually anchors the house to the landscape. Five different types of stone, including locally sourced Kasota stone, were combined to provide colour variation.

"No one colour dominates," says Simmons. "We have also varied the size of the stone, and the height of the base, to make it look like a house that has evolved over time. It was important that no single material overpowered the house." 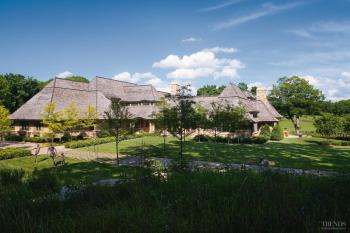 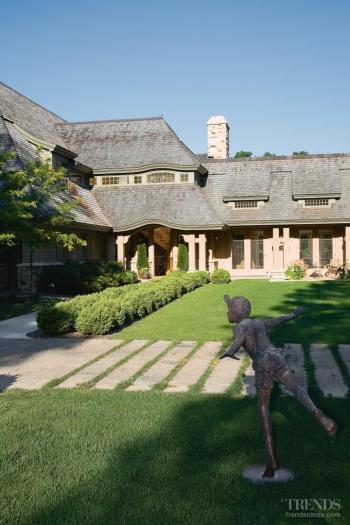 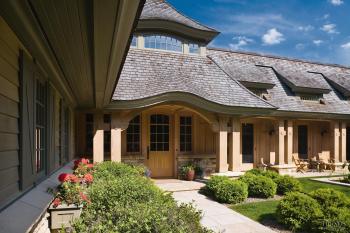 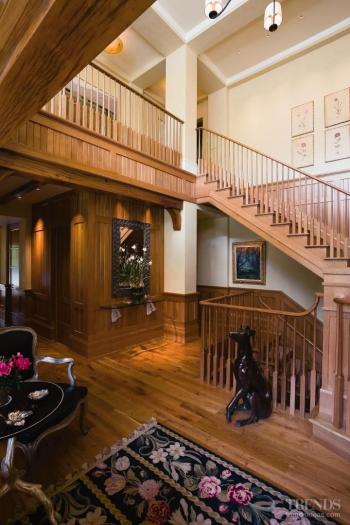 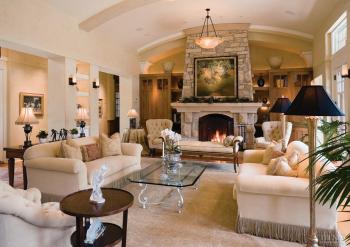 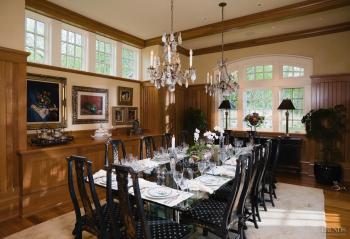 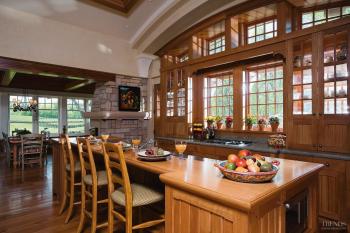 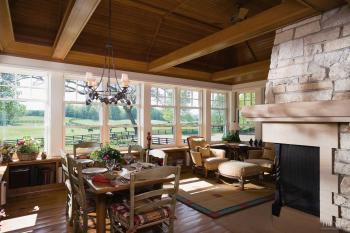 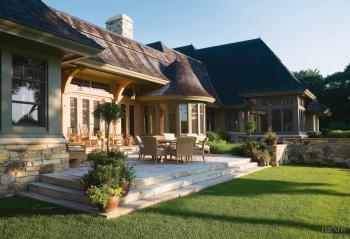 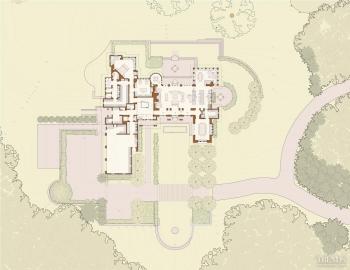 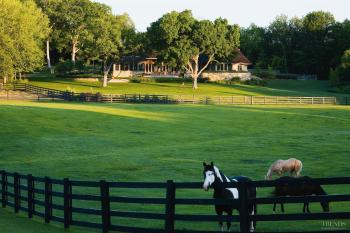 Simmons says the house was positioned against a grassy knoll, with a heavy wooded area on three sides. At the front, the house opens up to rolling horse pastures.

"The house was designed to appear as though it is almost growing out of the knoll," he says. "By stepping down some of the architectural elements, such as the eaves, we were able to provide a low profile. But, at the same time, the interior space wasn't compromised – the steep pitch of the roof meant we could tuck rooms into the building envelope, with dormers bringing in light."

In typical European farmhouse tradition, the eaves enclose the entrance to the house, with a deep curved overhang above the front door. Twin wooden columns are positioned on either side of the entrance, enhancing the sense of shelter.

The traditional farmhouse flavour continues on the interior, where barrel-vault ceilings complement the arched windows. The use of reclaimed materials also enhances the character – the white oak floor features wood from old tobacco barns, complete with original nail and bolt holes. Panelling and cabinetry made from the same wood provide continuity throughout the house.

An entrance gallery opens directly to the family living room, with a line of large columns providing visual definition from the circulation area.

"The barrel-vault ceiling in this room ensures the space is not overpowering," says Simmons. "It was important not to overscale the space, as it needed to feel warm and welcoming – the owners wanted a comfortable home that would be a base for their extended family to enjoy."

In addition to the natural light from the large windows, including those in the adjacent gallery, there is a traditional barn cupola above the kitchen island, which brings extra light into one end of the living space. Further light is provided by glass-fronted cabinets set against a window wall in the galley-style kitchen.

"The kitchen is a backdrop to the living room, so it plays an important architectural role," says Simmons. "With its curved top, the window cabinetry is almost like a furniture piece. Light filtering through the glass also helps show off the owners' collection of crystal."

Other features of the family living area include a large, rough stone fireplace, which forms a sculptural element at the opposite end to the kitchen.

Interior designer Renée LeJeune Hallberg, of BesonKading Interior Design, says the design of the interior reflects the owners' desire for an understated, yet serene and welcoming home.

"The owners wanted a quiet, monochromatic look, hence the neutral colour palette. Textural items add visual interest, and a variety of trims, cushion fabrics and artworks were introduced to provide colour and character."

The formal dining room has a similar colour palette, but sparkling chandeliers and black-painted chairs with gold chinoiserie detailing add a touch of formality. The high wood panelling in this room was determined by the typical height of the plate railing in a 100-year-old farmhouse, which was positioned out of the reach of children.

Another traditional feature is the porch next to the kitchen. Designed as an intimate family space, the room features a rift-sawn white oak vaulted ceiling. The structural beams have been exposed to enhance the country look.

"The rift-sawn wood is not as linear as straight, quarter-sawn timbers," says Simmons. "It provides a natural grain, which gives the whole space a more organic feel."

Simmons says the porch was designed as a multi-seasonal room. In summer, the triple-hung windows can be raised to open up the entire space, much like a conventional screened porch.

"This casual living space has been decorated in a typical, traditional farmhouse style," Hallberg says. "Green-washed, rush-seat chairs with ladder backs, a wool rug, and a wooden trestle table all enhance that look."

Hallberg says the interior was designed to set off the owners' favourite artworks. It was also laid out according to Feng Shui principles, which determined the angled layout of the master bedroom on the ground floor. This room incorporates a sitting room in an alcove, complete with Barbara Barry slipper chairs. And, as with every room in the house, the bedroom commands a picturesque view of the surrounding countryside.